One not so small step for Asus, one giant leap for AMD!

Apart from AMD's new 7nm mobile processors, the G14 also features Nvidia's GPUs. Our review unit arrived with the AMD Ryzen 9 4900HS processor and an Nvidia GeForce RTX 2060 Max-Q graphics card. Asus sent us the top-end model with the AniMe Matrix, which is priced at Rs 1,61,990. However, the entry-level model with the AMD Ryzen 5 4600H and the Nvidia GTX 1650 graphic card starts from Rs 80,990 without the AniMe Matrix display.

The new Zephyrus G14 follows the legacy of its predecessor, the GA502, with its thin and light form factor. The G14 arrives in two colours – Moonlight White and Eclipse Gray; our unit arrived in the latter. While the finish on the G14 lacks the gaming aesthetics, the AniMe Matrix display on the lid of select units more than makes up for the subtle white colour. The Moonlight White finish is visible throughout the G14's rigid magnesium and aluminium chassis, deck, and lid, or at least half the lid. The other half of the lid is covered in microdots for the mini LED lights, more commonly referred to as the AniMe Matrix display. These white LED lights can be configured through Asus' Armoury Crate software to do everything from display GIFs to custom text messages.

The LED's are definitely fun to use and easily visible even in bright light. The lights make quite the impression, although they can be distracting to people sitting on the opposite end and take a toll on battery life. In our view, the AniMe Matrix display is more of a novelty than a necessity. And in our experience, the excitement of novelty features often diminishes with time. However, the AniMe Matrix display is perhaps the only part of this laptop, on the outside, that screams gaming. Apart from the micro LEDs, there is a metallic Republic of Gamers establishment stamp on the lid. The Zephyrus logo has also been engraved on the back, separating the two vents. Speaking of vents, the ROG Zephyrus G14 features vents on the back, sides, and right above the keyboard deck. The G14 also retains Asus' famous ergo-lift hinge design that offers better heat dissipation and a more comfortable typing experience.

And make no mistake, the typing experience on this laptop is as good as it gets for a 14-inch laptop. The keyboard features a standard QWERTY layout with tiled keys. The spacing between the keys is adequate and makes up for the lack of an edge-to-edge keyboard. The keys also offer 1.7mm of travel to replicate the experience on a mechanical keyboard. 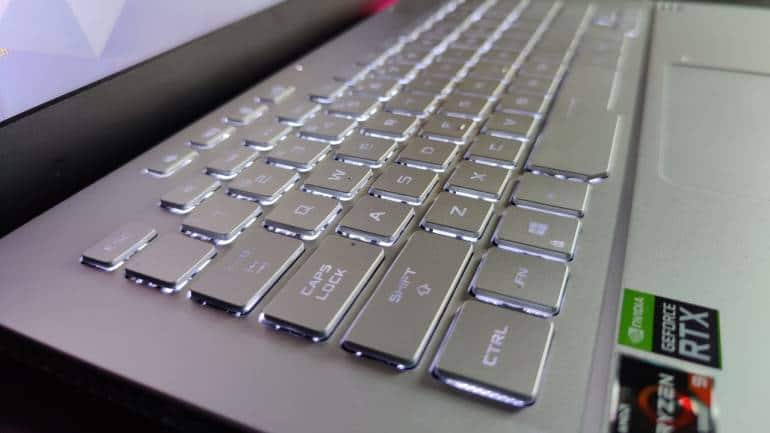 The keys also feel quite responsive, with a consistent actuation point and excellent feedback. Where the keyboard does fall short is the lack of some critical keys, like Page Up and Page Down. Asus should have definitely taken a page out of the new ZenBook 13's playbook here. The G14 also features a white backlit keyboard with some does not look good at all; we had the LEDs turned off for the most part. The G14 features a relatively small touchpad but feels responsive and smooth. The touchpad also comes with Windows Precision drivers.

The ROG Zephyrus G14 has a robust assortment of I/O for a 14-inch notebook. You get two standard USB ports, two USB Type-C ports, an HDMI 2.0 output, and a headphone jack. However, we'd have to give the G14 a 'B' in I/O, primarily due to the lack of an Ethernet port. While getting a USB to Ethernet adapter is easy, you will only have a single USB port for accessories if you prefer wired gaming. The position on the USB port on the right also seemed annoying. Additionally, the G14 even loses out on the webcam. 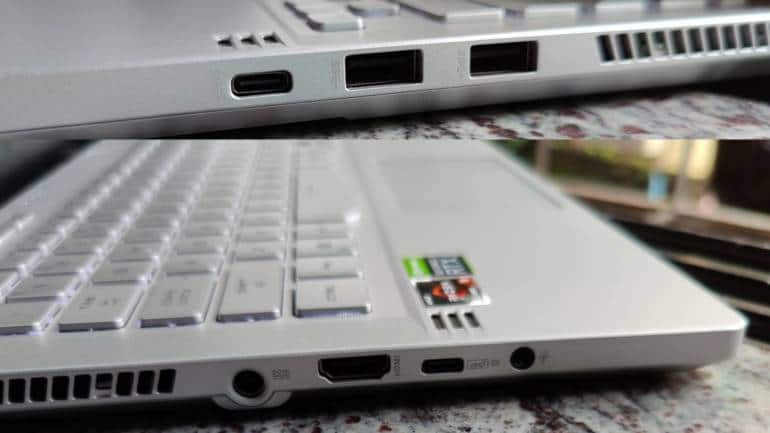 Our Zephyrus G14 model arrived with a 14-inch WQHD (1440p) panel with a 60Hz refresh rate. One of the biggest limitations of the G14 is the panel's inability that can keep up to the performance. Asus also offers the notebook in a Full HD (1080p) screen with a 120Hz refresh rate. However, we believe there may be an ulterior motive behind the WQHD display. The WQHD panel is designed for professionals by day and gamers by night. The screen produces 100-percent of the sRGB colour gamut and an above-average brightness of 330 nits. This puts it on par with some premium laptops like the Dell XPS and MSI Prestige. In terms of colour reproduction, the G14's WQHD panel gets it spot on. When it comes to E-sports titles, the G14 fairs extremely well. While playing Overwatch, we managed little over 110 fps on average on high settings. Counter Strike: Global Offensive saw us hitting 200 fps at times, while Apex Legends also managed to average out at around 90 fps. Moving on to a more demanding multiplayer title like Call of Duty saw the average frame rate drop to 75 fps on high settings. The last multiplayer title we tried was Battlefield V, which gave us 71 fps on average.

The impressive numbers on the multiplayer front continued with the AAA titles. GTA V on high settings delivered up to 135 fps. Shadow of the Tomb Raider also managed an average of 70 fps on high settings. Because single-player games don't have the high fps demands as multiplayer titles, we ran a couple of games on Ultra. Doom Eternal and the Witcher 3 came out swinging, delivering 104 and 61 fps, respectively.

It is worth noting that the games tested were in Full HD (1080p) resolution. Because the G14 is limited to a 60Hz refresh rate, most games will offer 60 fps on average if you run them on high settings in QHD (1440p) resolution. However, we would recommend the high refresh rate display for multiplayer gaming as there is a noticeable difference when gaming on a 60Hz and 120Hz screen, especially in first-person shooters.

In Cinebench R20's multithreaded test, the G14 managed to score 4,319 points. The Cinebench R20 test revealed just how capable the Ryzen CPU is when it comes to tasks that utilise all those eight cores. In terms of multi-core performance, the Ryzen CPU is the most powerful mobile processor we have tested, easily surpassing the Intel Core i9-9980HK.

Considering the eight-core CPU and RTX GPU, the Zephyrus G14 runs pretty hot. After 30 minutes of Call of Duty, the notebook started to get pretty hot on either side of the keyboard. After about an hour of gaming, you begin to notice the heat, with the area over the 'WASD' keys starting to get a little warm. Worst case scenario here is that the laptop gets too hot to touch, but only in certain areas that you need not require.

The CPU does run hot while gaming, but the GPU manages to remain stable. We recommend running the G14 on the max fan profile while gaming and switching back to silent mode when browsing the web. However, even in Turbo mode, the fans don't get too loud. It isn't easy to keep such a powerful 14-inch laptop cool, but Asus has done an excellent job of getting the best out of this CPU and GPU.

The Zephyrus G14 has two top-firing speakers that deliver some of the best audio you'll hear on a 14-inch laptop. The sound is powered by Dolby's Atmos technology, which handles all the audio processing. The Dolby Atmos app allows you to customise the sound to your liking and also has several audio presets for gaming, watching movies, listening to music, etc.

The Asus ROG Zephyrus G14 packs a massive 76Whr battery that can deliver excellent battery life for a gaming laptop. We are talking anywhere between 7 to 10 hours of regular multitasking and watching movies. In our testing, we managed over eight hours of battery life. The test included watching movies, browsing the web, and using MS Word. 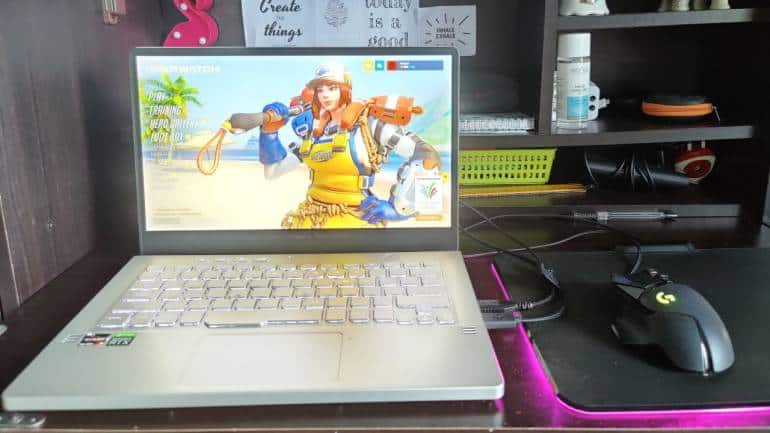 The G14 has one of the best batteries of any gaming laptop. To be able to fit such a massive battery in such a small chassis is quite impressive. The device takes around 40 minutes to charge to 60-percent with the included adapter. Considering mainstream gaming laptops can deliver up to five hours of battery life on average, we'd definitely say that the Zephyrus G14 delivers above-average battery life.

The Asus ROG Zephyrus G14 is more than just a gaming laptop in a thin and light form factor.  The G14 has all the qualities of an ultrabook with very powerful hardware capable of running the most demanding games. In our review, the G14 impressed on every front, including some very unsuspecting areas like audio and battery. Battery life was the best we’ve seen on a gaming laptop, easily capable of matching some of the premium laptops. Another great thing about this laptop is its build quality, which is simply top-notch.

Apart from the lack of a webcam and Ethernet port, it seems really hard to fault the G14. And when you consider that the G14 starts from Rs 80,990; it isn’t that expensive either. The G14 literally has everything you need, powerful hardware for gaming, excellent battery life for productivity, a good display for content creation or consumption, and a portable form factor for work on the go. Whoever said you could not have it all has never met the G14.
Carlsen Martin
TAGS: #AMD #Asus #gaming #laptops
first published: Aug 22, 2020 04:59 pm