After emerging as the largest party in the assembly elections, the BJP is now looking forward to forming the government in the state with the support of its ally Shiv Sena which is demanding an equal share in power.

In the just-concluded polls to 288-member Assembly, the people of Maharashtra elected 161 candidates from the BJP-Shiv Sena, 98 from Congress-NCP and 29 from others and independent candidates.

Going party-wise, the Bharatiya Janata Party (BJP) won 105 seats, a loss of 17 seats compared to its 2014 tally. The Shiv Sena's tally also came down to 56 seats from 63 in 2014. A resurgent Nationalist Congress Party (NCP) won 54, while its ally Congress bagged 44 seats.

After emerging as the largest party in the assembly elections, the BJP is now looking forward to forming the government in the state with the support of its ally Shiv Sena, which is demanding an equal share in power. The Uddhav Thackeray-led party is pushing to share the power in the state equally and the two saffron parties occupying the chief minister's post on a rotational basis.

Before the fresh government comes into power, here’s an analysis of the newly-elected MLAs based on their financial assets, criminal cases, educational qualifications, and gender representation, published by Association for Democratic Reforms (ADR). 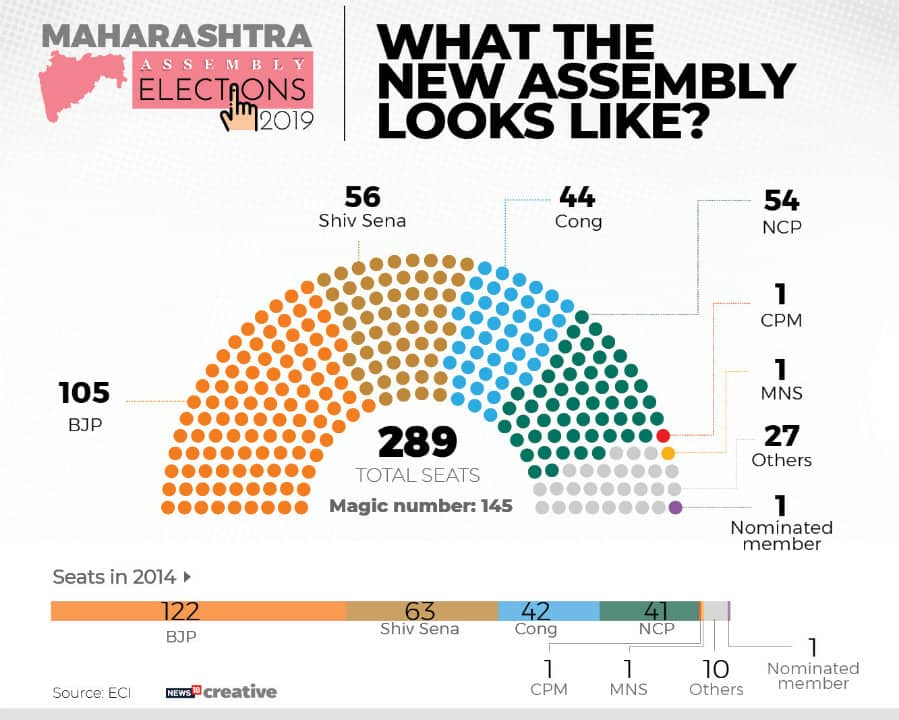 The report, however, does not analyse three legislators, including Baramati MLA Ajit Pawar, due to unavailability of their complete and properly scanned affidavit on the website of the Election Commission of India. Take a look:

Out of all candidates analyzed, 264 candidates are crorepatis, which means 93 percent of members have declared assets valued more than Rs 1 crore.

As many as 176 out of 285 analysed MLAs with criminal cases against them have been elected to the Maharashtra Assembly. This ran through party lines. This makes up around 62 percent of all the legislators. A total of 157 out of 285 analysed MLAs have an educational qualification equivalent to graduate or above. This amounts to 55 percent of the legislators.

As many as 117 MLAs – 41 percent – declared their educational qualification to be between 5th pass and 12th pass.