Kerala Health Minister KK Shailaja has made global headlines for her handling of the COVID-19 crisis, but she continues to stay alert, rooted in grassroots reality.

KK Shailaja, the much-feted Minister of Health and Social Welfare of Kerala who shot to global fame for her handling of COVID-19 in the southern Indian state, is so down-to-earth and approachable that everyone calls her Shailaja Teacher or even Teacher Amma (teacher-mother). It’s a respectful and affectionate term Malayalis use for schoolteachers and professors, and though Shailaja gave up teaching decades ago, she continues to wear the honorific comfortably.

Born and raised in the scenic seaside district of Kannur in northern Kerala, the friendly politician is accustomed to being in the news of late. In June, after three months of India’s nationwide lockdown, she was invited to a United Nations panel discussion for her efforts to fight COVID-19 in Kerala.

International newspapers variously headlined her as the “rockstar health minister” or “coronavirus slayer”, and her smiling face was broadcast on television channels worldwide.

The 66-year-old was also voted the world’s ‘top thinker’ for COVID-19 by a UK magazine, beating even New Zealand Prime Minister Jacinda Ardern. On September 24, World Health Organization Director-General Tedros Adhanom Ghebreyesus announced that Kerala had received the UN Interagency Task Force award for its “outstanding contribution” towards preventing and controlling the spread of non-communicable diseases, the first in the state’s history.

For Shailaja, however, the onslaught of plaudits this year comes after decades of working on the ground with the common folk of Kerala and promoting scientific thinking. Even when she was approached by film producer Rima Kallingal for the Malayalam film Virus (2019) about her successful handling of the Nipah outbreak in Kerala in 2018, in which popular actor Revathi would play Shailaja’s role, she had only one request to make of the film’s director Aashiq Abu: “The film should be scientific. In future, students should be able to gain knowledge from it.” 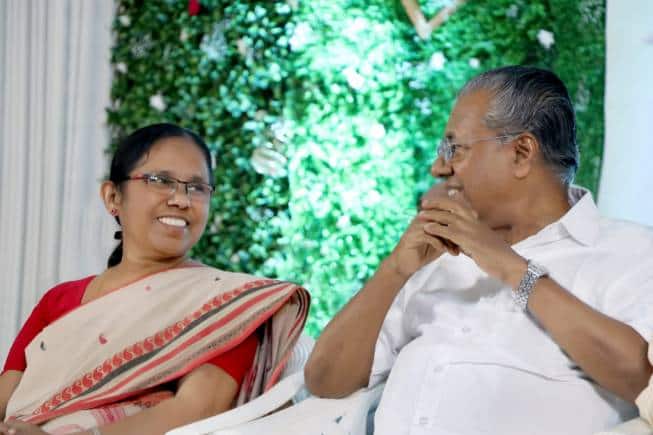 In her own characteristic aunty-next-door way, Shailaja chuckles on the phone: “I am not silent and sad like Revathi was in the film, though. I am vocal and vigorous.” She laughs it all off good-naturedly.

Shailaja’s earthiness is typical of women of her generation, especially in the northern districts of Kerala where the Communist Party of India (Marxist) or CPM has been a dominant political force and organisational entity since the mid-20th century.

Unlike in other parts of India where electoral politics are perceived as either a lucrative career option or a dirty business (or both), here one’s political affiliation is often something one is born into, much like Hinduism. You don’t convert to other political ideologies unless it’s a matter of life and death.

In Shailaja’s case, her maternal grandmother Kalyani and her grand-uncles laid the foundations of her own political affiliation early on. “My grandmother’s father worked as a supervisor on a British tea estate; they called him Raman Maistri (‘maistri’ means supervisor). The family was considered one of the wealthiest in the district; they lived in a two-storey house that was called a bungalow because everyone else lived in huts,” she reminisces, immediately breaking off to joke, “Now it’s one of the smallest houses in the neighbourhood!”

The good life, however, did not continue into Kalyani’s generation. Though she married into a wealthy family and had two daughters, she was widowed at a young age and things went downhill after that. After the premature death of her husband, Kalyani was attracted to India’s freedom struggle and communism, which was still in its nascent stage in the 1930s and ’40s in the region (the state of Kerala was later formed in 1956). 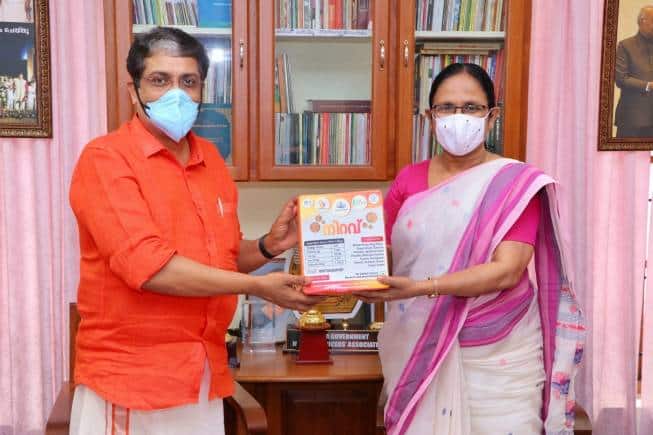 Her five brothers too espoused the cause, and with their education and relative privilege, they fought for the rights of the bonded labourers against the exploitative landowners of the time.

“Can you imagine how pathetic the condition of the lower castes was at the time? Their women were not even allowed to wear top garments. Their children were not allowed to go to school. Untouchability was at its peak,” says Shailaja, crediting social reformers like Sree Narayana Guru for bringing about lasting change in all levels of society.

The only woman activist in those days in her community, Kalyani managed to win the respect and support of both the landowners and the labourers, and became an informal village leader, helping solve disputes, fighting for the rights of the lower castes, distributing food and clothes to the needy, educating them about India’s freedom movement, and even scolding drunken troublemakers from time to time!

“At that time, women were not allowed to even sit in large gatherings, but my grandmother was given a chair amongst all the men,” Shailaja narrates.

Once the communists were elected to power in 1957, they set about changing discriminatory social structures. Through various reforms in land ownership, healthcare and education, they ensured that each individual had access to free schools, hospitals, housing and food.

The only child of a farmer and a homemaker, Shailaja idolised her grandmother and took to social work at a young age along with her. She joined the Students’ Federation of India (SFI), a student organisation affiliated to CPM, in 1979 when she was studying chemistry and physics at Pazhassi Raja N.S.S. College in Mattannur, which was 20 km away from her home.

Life for Shailaja in those years was all about the study of science, activism, and travelling to and from college. “The only cinema hall in Kannur was five km away from home; we walked down there once or there twice a year,” she smiles. The year 1981 brought two massive changes in her life: she not only completed her second Bachelor’s degree and got a job as a teacher, but she also married fellow CPM worker and teacher K. Bhaskaran. They went on to have two sons together – Sobhith, now 34, is an electrical engineer and currently heads operations at a COVID-19 healthcare facility in Abu Dhabi, while Lasith, 32, did his MTech and works at Kannur International Airport.

Shailaja joined CPM full time in the 1990s. She volunteered in Kerala’s Total Literacy campaign for a year, teaching septuagenarians how to read and write. “They told me, ‘Now no one can cheat us of our land’.”

One of the few women in the party at the time, and a good speaker at that, Shailaja quickly rose in the ranks of the women’s cadre. In 1996, she was elected Member of Legislative Assembly to the Kerala state from the Koothuparamba constituency, and her position in the CPM was sealed.

She is one of only two women ministers in the present state government headed by Pinarayi Vijayan, and under her watch as healthcare minister, the state now boasts of top facilities and technologies at government hospitals.

She rues the eroding of civic values in the newly consumerist Kerala, flush after decades of economic prosperity. “Instead of following scientific thinking, they are now drawn towards superstitions and false beliefs. They want to live on individual terms and in closed communities, and the sense of social and civic unity is disintegrating. This makes it easier for Hindu and Islamic fundamentalists to make inroads into society. We have to fight these tendencies once again,” she says gravely.

Having successfully overcome the Nipah virus outbreak, Shailaja and her team were doubly concerned when the first COVID-19 case was reported in Wuhan, and took immediate action as early as January 2020. “I knew that more than 6 lakh people would return from abroad and other states to Kerala due to the lockdown, and it was my duty to contain the spread,” says Shailaja. Stringent measures were put in place at airports and teams were assigned to follow up on each passenger to ensure quarantine.

As a result of these measures and strict lockdown enforcement, Kerala’s COVID-19 death rate is 0.35 percent, as compared with 1.6 percent average India rate and 3 percent globally (Kerala reported 180,000 cases out of India’s 6 million as on September 28 at the time of writing this piece). But there’s no giving up for Shailaja’s team: “We control the spread in one cluster, and then another one comes up.”

There were other bitter challenges too along the way: the tragic Air India plane crash at Kozhikode airport in early August left nearby districts reeling with added demands on the healthcare system and devastated infrastructure.

Then, in early September, a young COVID-19 patient was raped by an ambulance driver who was transporting her to a COVID-19 facility in southern Kerala. “I had sleepless nights,” Shailaja admits. “Whenever such incidents occur, I tell myself, ‘Never repeat this’.”

While the incident forced the health ministry to enforce even more stringent rules, it also gave ample ammunition to the state opposition to launch attacks on Shailaja. “Elections are coming,” she says wryly, brushing off a Congress leader’s sexist remark calling her ‘COVID Rani (queen)’ as yet another effort to tarnish the ruling CPM’s image. “It is a reflection of deep-rooted misogyny in society. It does not bother me anymore,” she says.

Shailaja shares the slogan of a campaign she launched after taking over Kerala’s Women and Child Development Department, Sadhairyam Munnottu, which translates to “be brave and go ahead”.

“Women should study, get a job and be earning members of their families; that is the most important factor for women’s rights and society as a whole,” she emphasises. She regrets that even as the state has become richer and women are better educated, they stay home after marriage and don’t work even if they have BTech or MBA degrees.

“Whatever their field, they should work for society, otherwise their education is a waste and women will always be looked down upon as the second sex,” she says.

Indeed, Shailaja’s campaign slogan could well be the motto of her own life and her lasting legacy.