Over the past five years, all energy costs have been subject to two unanticipated headwinds. One was the discovery of shale oil which could be recovered quite easily at average costs of around $40 a barrel equivalent. The other was renewables – particularly wind and solar.

Five years ago, providing an answer to a question on the direction of energy prices would have been difficult.  This was because prices were invariably linked to oil.  And this industry was itself subject to a variety of pressures — that of cartelization and production control by OPEC and its allies, political uncertainty and wars in the Middle East, and the production plans of Russia, which has the largest known reserves of oil in the world.

But over the past five years, all energy costs have been subject to two unanticipated headwinds. One was the discovery of shale oil, which could be recovered quite easily at average costs of around USD40 a barrel equivalent. The other was renewables – particularly wind and solar. There were some of the issues discussed at a conference organised by Columbia Business School’s (CBS) Chazen Institute for Global Business, featuring Professors Patrick Bolton and Geoffrey Heal presenting their research.

Most significant were two presentations.  The first was on The Emerging Energy Revolution: Its implications for Economic Development by Heal, Donald C. Waite III Professor of Social Enterprise Economics at CBS  and Bernstein Faculty Leader at the Sanford C. Bernstein & Co. Center for Leadership and Ethics.  The second was on Climate Change and Finance by Bolton, Barbara and David Zalaznick Professor of Business Finance at CBS. 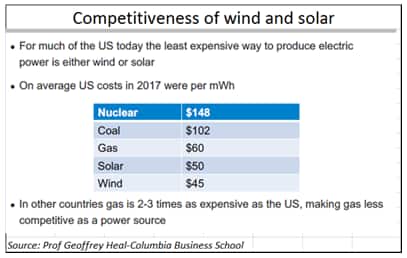 Broadly, there was a consensus that oil prices would generally stay around the USD60 a barrel mark. The recent spike was only because of uncertainty surrounding relations between Iran and the US, and huge cutbacks imposed by Saudi Arabia in an attempt to shore up oil prices. However, once oil prices go beyond the USD50 mark, shale gas becomes profitable. Hence, more shale gas units resume production, thus filling the void that Saudi Arabia wanted to create. This does raise the vexatious question about the rationale for India adopting large nuclear plants. But that could be a subject to discuss some other time.

But there is another factor which has caused oil prices to remain muted.  Prices of renewable energy have begun falling, especially for solar.  Today the cost of various forms of energy for producing electricity indicate that nuclear is an option that few countries would like to adopt.

So does that mean that wind power will remain the cheapest source?  Not really. Wind is highly unpredictable. And, like solar, is intermittent. But solar is predictable. Hence, is it possible to plan grids based on solar power generation timings. Some countries use wind to balance out solar. Winds are stronger at night when there is no solar.

But, warned Prof Heal, wind is a mature technology and there is little scope for further price reduction.  Solar, on the other hand, is a new technology and prices are tumbling down each month (see chart).  That is why solar costs could be safely assumed to continue falling.  Some experts believe that solar costs could fall by another 30-40% within the next five years. The intermittency problem, too, can now be solved with the use of batteries which have seen prices fall (see chart).  The most promising at the moment appears to be lithium ion which has seen prices fall and the storage capacities zoom.  However, it must be said that in many places in Africa, Lead-acid batteries are still used quite effectively because they are more robust and easy for the locals to maintain. 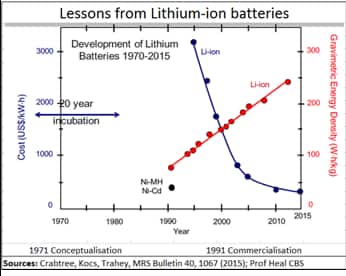 Almost all the experts were of the view that the future of energy could lie in micro grids [what this author prefers to call decentralised clusters. Their labour-intensive nature also makes them provide excellent employment generation opportunities.  The main grids could be used for industry and heavy high tension power applications, but would soon become largely redundant.  The use of hydrocarbons would continue, but more for defence and aviation than from land transport or energy. The use of smart grids is bound to increase.

Obviously, in order to make the renewable energy market that much more attractive a better form of encouragement could come from some kind of carbon emission tax.  How this is to be done is a matter that several countries have already begun toying with.

India has the advantage of adopting these technologies when the cost curve is already on the decline.  In fact, China and India could be the biggest beneficiaries of such technologies.