At 20.4 times its 2-year forward earnings, Raymond’s valuations are inexpensive and attractive for going long

Raymond's Q2 earnings show that the fabric and apparel player has seen a marked improvement in performance (YoY). As on September 30, Raymond's network includes 1,282 stores across all formats, covering 2.2 million square feet of retail space. The mini-TRS (The Raymond Shop) count stood at 139 stores. Here's how the quarter panned out for the company's units

Branded textile segments - suiting and shirting - registered healthy double-digit sales growth of 14/17 percent YoY, respectively. This was primarily on the back of growth in trade channels. Higher raw material (wool) costs, coupled with a spike in advertisement spends, led to a small dip in margins.

Revenue grew because of better offtake by customers and yarn sales from the linen manufacturing plant at Amravati. A good product mix and stabilisation of Amravati operations helped like-to-like margins go up.

Growth in revenue was attributable to exports growth in the US. Like-to-like margins witnessed a visible improvement due to operational efficiencies.

Healthy demand in domestic markets led to a growth in sales. Margins inched up due to the successful implementation of ongoing turnaround strategies, along with product rationalisation initiatives. Festive season sales should give this segment some momentum in Q3 and Q4. Raymond has launched new collections to achieve product differentiation and meet the varied demands of buyers.

Park Avenue is likely to be among the fastest growing names in this segment by FY20e. Raymond is recalibrating its entire range of offerings in this brand from being strictly formal to a combination of casuals and formals.

Raymond’s linen shirting fabric manufacturing facility at Amravati, which commenced operations in Q3 FY18, should see its utilisation levels increasing with the passage of time. Improved processes will have a favourable rub off on margins.

Indian Rupee’s depreciation versus the US dollar will be a big advantage for Raymond. This is because the company exports apparel (formal variants) predominantly to the US from its Ethiopia-based manufacturing unit at zero rates of duty.

Among Indian deodorant brands, Raymond’s Park Avenue enjoys market leadership with a total share of 15 percent. The company looks forward to capitalising on this advantage by achieving a wider geographical reach.

Going forward, the addition of MBOs (multi-brand outlets) and EBOs (exclusive brand outlets) in tier 4/5/6 regions will continue to gain momentum. Both formats have been registering high double-digit growth. Most of the new outlets will be opened under the franchise route to keep the business asset light.

Raymond is focusing its attention on premium clothing variants, which not only command better realisations but also yield high margins. In addition to accentuating brand appeal, this becomes important in normalising marketing spends (as a percentage of sales).

Given the rise in rental costs for commercial properties at marquee locations pan-India, the impetus will be laid on choosing smaller-sized stores. Though promotional expenses are anticipated to remain high in future, there will be a conscious effort to reduce the number of discount days in every quarter.

After approving a proposal to monetise the Thane land bank, requisite permissions are being sought by the management to commence a project there. Proceeds from the same may be utilised to reduce debt. How things pan out will be known whenever an official announcement is made in this regard.

Prices of cotton and wool, among the most crucial raw materials for Raymond, have been fairly high. The trend is expected to persist in the near-term.

The management stated that in Q3 FY19, demand outlook is expected to be somewhat subdued (in the high single digits) because there are not too many auspicious wedding dates as per the Hindu calendar.

Competitive intensity in textiles remains high owing to the presence of unorganised players and other brands. Aggressive discounting strategies adopted by e-commerce players have only added to the woes.

Extended EOSS may lead to a dent in margins since price cuts have to be taken to attract more footfalls.

In the long-run, though Raymond has adequate top-line visibility in its auto parts segment, margins will be under pressure in the short-term since input commodity prices have been inching up of late.

Superior brand positioning and recall, personalisation measures (tie-ups with tailors in some regions, to begin with) and improved in-store experiences (through store refurbishments, availability of out-of-stock inventory from another outlet in a few days) will be among the critical revenue drivers for Raymond.

The conclusion of a significant portion of capex (Amravati, Ethiopia) in FY18 should regularise cash flows gradually in times to come. Restructuring exercises in the tools and hardware segment is another positive. 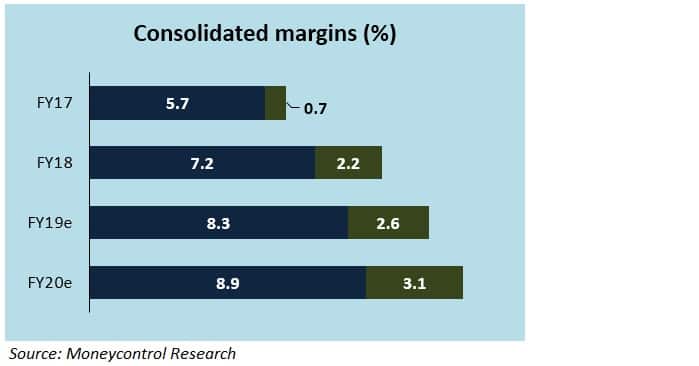 At 20.4 times its 2-year forward earnings, we believe Raymond’s valuations are inexpensive and attractive for going long.