Here are some stock ideas from Rahul Arora

In an interview to CNBC-TV18, Rahul Arora, CEO of Nirmal Bang Institutional Equities shared his readings and outlook on specific stocks and sector.

In an interview to CNBC-TV18, Rahul Arora, CEO of Nirmal Bang Institutional Equities shared his readings and outlook on specific stocks and sector.

Below is the verbatim transcript of Rahul Arora's interview with Ekta Batra & Anuj Singhal.

Anuj: A word on Britannia Industries because in this quarter there was quite a bit of miss in terms of earnings and you have a short on this stock which is anti consensus. You want to explain that.

A: A disclaimer, it has been our worst recommendations but the thesis that we were hoping to play out two years back is starting to play out two years hence. We are starting to see that Britannia is going to enter into a high cost environment. I want to see how he maintains the gross margins through this high cost environment at a time when I understand the entire industry is migrating to premiumisation, it is still operating at the lowest gross margin in the entire fast moving consumer goods (FMCG) sector even though the gross margins from where we initiated in FY14, has gone up substantially. The risk to the earnings per share (EPS) decline, if the gross margins come off even by 50-100 bps is quite substantial. I do understand that most of the street has a buy on it; we are anti consensus, it is trading at about 35-36 times our FY18 estimates. It is trading at about 30 times the street but the call here is I want to see how he operates in higher cost environment. However, his advertising costs are going to go up from here as was witnessed in this quarter's numbers as well. He has put up a new research and development (R&D) centre in Bangalore, so peoples' costs are also going to go up. 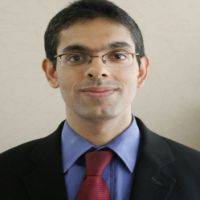 Therefore, the point I am trying to make is his gross margins are the lowest in the FMCG industry; his costs are going to rise. I want to see the impact on the EPS, which is why I am not entirely comfortable even giving it a hold rating at this point. It has been a dream stock. It has been the best performing stock, we have got it wrong but if Q1 also disappoints and the process of downgrades could start quite substantially in Britannia.

Ekta: What about the reality check that Jubilant Foodworks might go through or it should go through when it comes to valuations?

A: It depends on how you are looking at the business. The sensitivity to EBITDA margin expansion to EPS in the case of Jubilant Foodworks, if you look at Jubilant's numbers from FY07 to FY12 and even from FY12 to FY15, which was the down period, a 50 to 100 bps swing in EBITDA margins can move the Jubilant Foodworks' EPS by anywhere between 40 and 60 percent assuming a 20 percent topline growth. However, the big question to take is what that topline growth is essentially going to be because the market has been disappointed by that. I do not think he is doing too badly on costs even though rent and employee expenses are going up and I do not expect them to materially come down but if he is able to manage 20 percent growth, which is a call that I cannot take sitting here. I have always maintained Westlife and Jubilant as slightly longer term stories and the revival is taking a little longer.

Ekta: Is the business structure just going different, are we seeing a different model because they are losing market share to the likes of Swiggy apps which are coming up and people are just getting much bigger options to deal with. Is there a structural change that Jubilant Foodworks has to change itself and it is not going to be something near term that we are going to see?

A: It finished FY16 with the highest market share in the quick service restaurants (QSR) industry at 60 percent and Swiggy, since you mentioned, is actually in a tie-up with Jubilant. So they are actually going to be using their services to approach. However, earlier Jubilant was only catering to 2-3 kilometres within its radius. Now they are going to hire these guys on bikes to penetrate areas where they were earlier not going through. So the same store is going to reach out to a lot more with the cost not necessarily coming on Jubilant's books.

The point I am trying to make is, this is an operating leverage business, if the street gets it wrong by 1 percent on EBITDA margins for one year, your EPS could be up by 60 percent and the stock at 6.6 percent went in a linear fashion from Rs 1,250 to Rs 1,950. I know it is going through a tough time and I will still tell people to ride it out. A personal disclaimer, I do hold this stock. I still think there is a lot.

Anuj: Colgate Palmolive (India) came out with numbers, topline was much better but the realisation was that they have to spend a lot more ad spent and that dented their margins. The stock has recovered of course, it had priced in a lot more before the numbers but you have done some analysis in terms of cost and everything else. Do you get a sense that the worst is over for Colgate?

A: I will give two or three crisp points on this. When Procter and Gamble Hygiene and Health Care launches in Brazil, the market share of Colgate in Brazil was 80 percent. In India, it is nowhere close to that. Colgate has lost 150 bps market share conceded but it has lost it from 11 year high of 57 percent and despite all the volume that Patanjali has come up with; it has lost only 150 bps. I am not saying it will not lose further - that 57 have come down to 55.5. If they are able to manage or restrict that loss to 150-200 bps stabilise and then start moving upwards, I think it is a phenomenal story. I think it is a phenomenal story anyways.

Coming to the point of advertising; it is a very valid point, Colgate, a few quarters back had reached 20 percent as a percentage of sales in advertising - that number had come down to as much as 15.5-16 percent and that is what you saw giving the huge EBITDA margin expansion in Colgate over the last one year. In this last quarter, the ad spent as a percentage of sales has gone up by 300 bps. I think Colgate anticipated how big a threat Patanjali could be and hence they took their advertising spends lower. Obviously P&G retreating did help them. On our estimates the stock is coming to you at 30 times FY18. I do agree that I am in a minority on Britannia but if I was to look at Colgate, the reporting of 5 percent volume growth in this environment, managing to restrict its market share loss to just 150 bps and I have seen this time again, P&G launched, people thought Colgate would be a write-off.

Anuj: Just to play devil's advocate, you are talking about 55 percent; 55 percent itself is a very large market share and there is a risk of 55 percent becoming 45 percent or 50 percent, let's put it conservatively. What we have seen from Patanjali, it is only going to increase the competition from here and they got regulatory environment to favour them. Isn't there a risk in that case?

A: The answer is implied in your question, the fact that 45 percent of the market is available for Patanjali to take away from other players, leaves me less concerned about Colgate having to lose market share because Dabur India and Hindustan Unilever are far weaker players in this segment than a Colgate is. Just to give a point and this is a point I have been making for years now for Colgate and P&G.

Colgate does work in 25,000 villages in India with a 'Dentist per village', you cannot compete with that and similarly for P&G; the amount of work that is done trying to explain the benefits of sanitary napkins. So the point I am trying to make is that 45 percent of the market that Patanjali can take away, I am not disputing that Colgate may not lose further market share but if that can be contained to maximum of 300 bps, stabilise and rise. So, I welcome the threat; let them expand the category, if they expand the category Colgate will grow along with that.

Ekta: It's been a dream run for V-Guard Industries. What is your target price and when does it get a bit too expensive?

A: The target price is about Rs 1,425-1,450.  We are expecting the company to report about 15 percent topline growth and close to about 20-25 percent EBITDA and profit after tax (PAT) growth between FY16 and 18. It is a 35 percent plus return ratio business with close to 150 crore of free cash over the next two years. The non-south market, which had a breakeven in FY15, has reported 4.5 percent EBIT margin for the year. I think it is phenomenal. The non-south business is doing well, the discounting is going down and the gross margin for the year is expanded by 340 bps. So even now, after the run and it has had 75 percent run since February 12 which was its 52 week low? I still think it is trading at 20 percent discount to Havells India. Therefore, I still recommend people, who are in the stock, to hold on. However, I am not sure if one can buy it at this price because it has had a 75 percent run, but if one is holding on to it then hold on it, might see a bit more on V-Guard.

Unacademy to join the unicorn club