N Chandrasekaran, the newly appointed chairman of the Tata Group, completes his first year on February 21 and as many as 10 stocks rose up to 180 percent in the same period, data showed.

Before taking charge as the chairman of Tata Sons, the holding company, N Chandra was the managing director and chief executive of TCS, which commands the second highest company by market valuation at Rs 5.6 trillion.

Chandra also chairs the boards of several group operating companies, including Tata Steel, Tata Motors, Tata Power, Indian Hotels and Tata Consultancy Services (TCS) — of which he was a chief executive from 2009-17.

According to the current group structure, Tata Sons has control over its subsidiaries at varied levels. It controls about 74% in TCS and just about 21% in Titan, said a report.

Tata Group stocks which rose over 100 percent include names like Tinplate Company which rose 186 percent, followed by Nelco which was up 102 percent in the last one year.

However, 4 out of 26 stocks gave negative returns which include stocks like Tata Motors which was the top most loser in the Tata Group stocks down 19 percent, followed by Tata Communications which was down 16 percent, Rallis India dropped 6 percent, and Tata Teleservices and Benares Hotels plunged by 3 percent each. 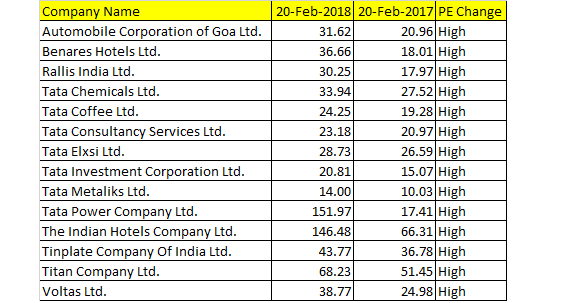