Upcoming Webinar:Watch a panel of experts discuss: Challenges of continuously evolving regulation for Cryptocurrency, on 7th July at 3pm. Register Now
you are here: HomeNewsBusinessStartup

Funding in the space may increase 5-6 times next year with more global venture firms looking at the space. Clarity on regulation, towards which India has begun to move, will also boost investments.

Venture capital (VC) firms are eyeing investments in Indian startups that are carving themselves space in Web 3, which marks the next stage of the Internet’s evolution, and cryptocurrencies.

Startups that include crypto, blockchain – a kind of digital ledger -- and non-fungible tokens (NFTs), or units of non-interchangeable data stored on blockchain,  have raised $511 million this year, according to data provider Venture Intelligence.

Most of the money has gone into crypto startups, mainly exchanges, which have raised as much as $448 million, an increase of nearly 19 times from last year, the data shows. 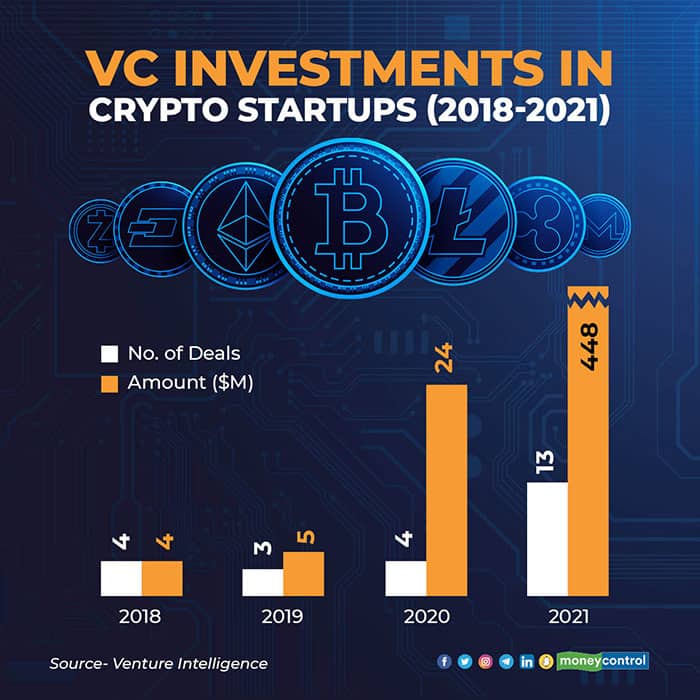 “The application side of crypto is still less developed versus the asset side, and in 2022, we will see more infrastructure and tooling for DAOs as well as some real-world applications of NFTs”, said Nitin Sharma, partner and global blockchain lead at early-stage VC firm Antler Global.

Funding in the space may increase 5-6 times next year with more global venture firms looking at the space, Sharma said. Clarity on regulation will also boost investments. India is moving towards regulation of digital money amid surging interest in crypto among young, first-time investors. Crypto is not legal tender yet in the country although trading in virtual money is allowed.

“The pace of funding in Web 3 and Crypto was far ahead of other sectors in the second half of 2021. I expect it to continue in 2022 as an increasing number of stellar founding teams in India opt to build in this new segment and investors who believe in the move towards decentralisation back them early,” said Vaibhav Domkundwar of Better Capital, a fund that has invested in more than 10 crypto startups so far.

“For example, several categories like gaming are expected to see a dramatic and fast evolution with the play-to-earn model powered by NFTs,” added Domkundwar. Equity investments are increasing in the crypto space. A number of startups or protocols have primarily been looking at crypto-focused funds, global funds and ecosystem funds to raise money via token networks, experts tracking the space said.

Through token networks, a startup or a protocol raises money by issuing digital tokens without the transfer of any equity. These tokens, the equivalent of equity, have the potential to accrue more value over the years.

“Crypto rounds tend to be more diversified than equity rounds with several funds in the rounds, and founders prefer investors with global reach or the ability to invest in digital assets”, said Sharma.

This creates a challenge for many local VC firms that cannot invest in digital assets, he added.

Echoing similar sentiments, Domkundwar added, “A lot of investments in the global crypto or Web 3 space will be structured as token sales and we will likely have a separate fund for these token purchases in 2022.”

Experts say these startups or protocols will allow one to take part in the token investments in exchange for bringing to the table something more valuable --potential users of the project, crypto followers, talent from other countries and so on.

Sharma added that while many global projects start with private and public token issuances, some start-ups also start with equity, but move to a token network as they progressively decentralise via a hybrid model.

This is not new. In 2017-2018, initial coin offerings (ICO) experienced a boom. “But, these days, initial dex offerings (IDO) are more popular which happens mostly through closed communities,” said Mohit Mamoria, managing partner at Authorito Capital.

Short-form video app Chingari launched an IDO on December 15 for its GARI tokens, and reportedly closed a funding round on Solrazr, a fund-raising platform, by raising more than $6 million.

Most projects are not disclosed. “These can be discovered via communities which are mostly in Discord (a messaging app). The way to get through to such communities is to be an investor and get referred by another investor who is active. Popular crypto platforms or projects have links to the communities on their websites for everyone to join,” said  Mamoria.

“Token investments have been rising every year and they will continue to grow. It’s just easy for entrepreneurs to grow the network through tokens. They get to raise money as well as earn the loyalty of those who buy the tokens,” said Nischal Shetty, co-founder of crypto exchange WazirX.