While Bengaluru remains the startup hub, the Delhi-National Capital Region has emerged as the fastest-growing market, seeing a three-fold year-on-year increase in leasing by startups in 2021

Startups are expected to lease about 29 million square feet of office space between 2022 and 2024, a 1.3 times jump from 2019-2021, with finetch and logistics companies driving the demand, a report by real estate company Colliers and CRE Matrix has said.

By 2024, startups would likely occupy 78 million square feet, accounting for a 13 percent share in the office space, up from two percent in 2010, the 'Startups Scale Up’ report said.

“Within this start-ups segment, the fintech niche aces all others as the leader in terms of numbers of startups, occupied office spaces and growth. We anticipate other sectors such as ed-tech, logistics, healthtech and proptech to catch-up soon,” said Abhishek Kiran Gupta, CEO & Co-founder, CRE Matrix. 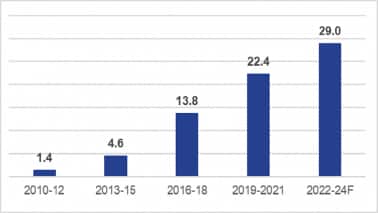 The demand would be led by fintech and logistics startups as they gained momentum following the coronavirus outbreak, which fast-tracked digital adoption, triggered ecommerce boom, while holding a strong pipeline in potential unicorns list, the report said.

“Within this start-ups segment, the fintech niche aces all others as the leader in terms of numbers of startups, occupied office spaces and growth. We anticipate other sectors such as Ed-tech, Logistics, Healthtech, Proptech to catch-up soon.” said Abhishek Kiran Gupta, CEO & Co-founder, CRE Matrix.

As of 2021, while global companies continued to dominate the Indian office space occupying more than 60 percent, the growth of startups has been the highest, accounting for a sizeable share of 10 percent.

Bengaluru remains the startup hub, with a 34 percent leasing share during 2019-21, with Koramangala, HSR and Indiranagar being the preferred locations, the report said.

A well-developed ecosystem, strong technology talent, and a culture of entrepreneurship were the major factors attracting startups in these cities.

The region benefits from being a catchment for education institutions in the northern and eastern parts of India, as well as strong infrastructure.

Mumbai has seen certain pockets of startup activity over the years but higher rentals and a high cost of living are often seen as deterrents by early-stage companies, the report said.

While metro cities remain the core hubs, non-metro cities, too, are seeing growth in startup leasing, as flex space take-up due to low cost of living, reduced capital expenditure and work-from-anywhere trend.

Emerging hubs such as Jaipur, Ahmedabad, Indore and  Coimbatore are likely to witness a rise in flex-space and startup occupancy as entrepreneurs.

The concept of shared workspace is gaining traction as businesses look to cut expenses on office space. The coronavirus outbreak has forced many companies to look at this model as employees work from home and a hybrid model of work gains ground.

The government’s digital push too has helped startups, as it has extended tax benefits to such companies, which are seeing a growing investor interest as well.

“The government’s push towards digitisation and ease of doing business has provided a big boost to the startup ecosystem. The sector has also piqued the interest of investors that has helped the segment scale up creating numerous opportunities in office space” said Vimal Nadar, Senior Director and Head of Research, Colliers India.

The startups established between April 1, 2016 and March 31, 2021 were eligible for the tax benefit scheme. The finance minister extended the eligibility to March 31, 2023.

Such startups are eligible for a 100 percent tax rebate on profits made for a period of three years in a total time frame of 10 years of operations, provided that the annual turnover does not exceed Rs 25 crore in a financial year.