Tiger Global Management, among other investors, is said to be in talks to lead the funding round. Moneycontrol sifted through internal documents for Turtlemint's revenue projections, business plans, IPO and more

Turtlemint, an online platform for buying insurance, is in talks to raise about $200 million, valuing it at over $1 billion – over five times its previous valuation – the latest internet startup to benefit from a funding boom, people said.

Tiger Global Management, among other investors, is in talks to lead the funding round, although the terms are yet uncertain and could change, the people added. One person said that Tiger may not invest but other investors are interested.

Tiger declined to comment while  Turtlemint did not respond to queries from Moneycontrol.

Founded by Dhirendra Mahyavanshi and Anand Prabhudesai, former employees of classifieds startup Quikr, Turtlemint started by providing an online platform for insurance agents to join and sell auto, health and life insurance. The company has adopted an online-to-offline model.

It has over 120,000 advisors who are on track to generate $54 million in revenue in FY22, according to a version of Turtlemint’s investor documents viewed by Moneycontrol.

Turtlemint will collect total premiums of $234 million in FY22 and wants this figure to grow to $2.5 billion by FY25, which is projected to bring in revenue of $350 million. It also plans to go public in FY25, the documents said.

In FY20, the last year for which its numbers are publicly available, Turtlemint made a profit of Rs 3.6 crore while its revenue doubled to Rs 46.8 crore.

It has added a software platform that third-party insurers or banks can use to sell insurance in a plug-and-play model (called Turtlefin) and has expanded this to the United Arab Emirates.

Turtlemint’s fundraising comes as larger rival Policybazaar concluded a Rs 5,700 crore initial public offering that was subscribed over 16 times at a valuation of about $6 billion, higher than the most aggressive estimates for the company's share sale. While Policybazaar has so far sold insurance online, it got an insurance broking licence from the regulator in June, allowing it to enter the offline segment and compete with Turtlemint.

Turtlemint’s pitch to investors is that it is not merely an offline distribution platform, but a technology company whose network and consumer base helps assess risk better, generates higher leads, disburses information faster and issues policies quicker. 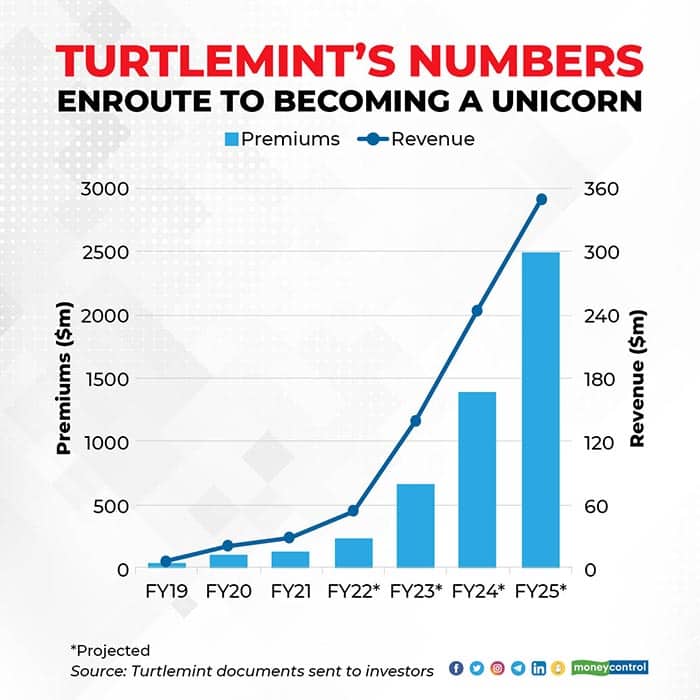 Turtlemint has raised over $75 million so far, most recently from Jungle Ventures and GGV Capital. Its other investors include Sequoia India, Nexus Venture Partners and Blume Ventures. The company was valued at over $200 million in March this year, people aware of the matter said.

“They have raised a lot of money in the last two years. They haven’t burnt much money but I don’t see why Policybazaar cannot out-execute them,” said an investor tracking the company, requesting anonymity.

People close to Turtlemint, however, said that it has honed its skills over the years by providing specialised content for sales agents, setting up a wide network, and more recently, using the software-as-a-service model to enable end-to-end sales and renewals.

While online insurance has been growing for the past decade, the Covid-19 pandemic boosted digital adoption. Sales agents became adept at video calls along with consumers browsing and buying insurance online. Online insurer Acko was valued at over $1 billion recently, in addition to Policybazaar and Digit, which are mature companies.

"If Policybazaar can be valued at $6 billion, Turtlemint can argue for a billion dollar valuation. But stock market prices are volatile. It can fall by half in a few weeks if markets turn. So it may not be the right benchmark," an investor in the space said, requesting anonymity.

Investors are betting that India, so far a sparsely insured nation, will start buying more insurance and online. About 4.3 percent of India is insured, compared with the global average of 7.4 percent, Moneycontrol reported.

More early-stage startups such as Plum Insurance, Verak, Onsurity and Loop Health have also seen increased investor interest. Tiger Global, with whom Turtlemint has had conversations, is also an investor in Policybazaar and Plum, a group insurance startup.

In 2021 so far, India has produced over 35 unicorns- the moniker for startups valued at over a billion dollars- once a rare breed. Internet startups have raised over $25 billion in nine months this year, more than double what they raised in entire previous years.