States that have drafted the rules but not yet notified them include Goa, Himachal Pradesh, Kerala, Telangana, Tripura and West Bengal.

July 31 was the deadline for real estate developers across the country to register projects that are under construction with the real estate regulatory authority set up by the state to frame regulations and rules as per the Real Estate (Regulation and Development) Act, 2016 (RERA).

The newly appointed minister of housing and urban affairs Narendra Singh Tomar confirmed that a total of 23 states and union territories have notified RERA rules under the RERA Act.

The remaining six states have drafted the rules but not yet notified them. These include Goa, Himachal Pradesh, Kerala, Telangana, Tripura and West Bengal, sources said. Goa has extended the deadline to October for ongoing projects to d register with RERA.

Six states and union territories that have constitutional issues as land in these states belong to the community or the autonomous councils include Arunachal Pradesh, Manipur, Meghalaya, Mizoram, Nagaland and Sikkim.

The central Real Estate (Regulation and Development) Act (RERA) came into effect on May 1, 2017, exactly a year after it was passed by Parliament.

As per the Act, developers, projects and agents had till July 31 to mandatorily register their projects with the Real Estate Regulatory Authority. Any unregistered project would be deemed to be unauthorised by the regulator.

Under RERA each state and UT will have its own Regulatory Authority (RA) which will frame regulations and rules according to the Act. But not all states have a real estate authority in place yet and some with one have diluted the original provisions as per the Central Act.

RERA covers both new project launches and on-going projects where the completion/occupation certificate has not been received.

According to the provisions of the Act, for ongoing projects which don’t have a completion certificate issued, developers have to make an application to the authority for registration of projects within a period of three months from the date of commencement of this Act which was May 1.

Under RERA, a developer cannot sell residential or commercial units in a project, ongoing or new, unless those are registered with the regulatory authorities.

The Act also calls for mandatory registration of real estate agents and calls for developers to set aside 70 per cent of the funds collected from buyers in a separate escrow account to ensure that projects are completed on time.

UT of Andaman and Nicobar Islands has tagged with Tamil Nadu for establishment of permanent Real Estate Regulatory Authority.

A total of five states are in advanced stages of implementation of online registration through web portal. A total of seven states are using the code for development of web portal shared by the ministry along with five UTs without legislature.

Home buyers say that they are where they began. Most states have diluted rules to favour developers. Most states have moved away from the Centre’s definition of ongoing projects and excluded projects for which lease deeds of either 50 percent or 60 per cent of the apartments have been executed or for which partial completion or occupation certificates have been obtained by the developer. This leaves little hope for homebuyers stuck with old unfinished projects.

In some states mere filing of application to the authority for issue of completion or occupation certificate is enough to ensure that the project does not come under RERA. Strangely, one state has even ruled that laying of slabs in a housing project is enough for the real estate project to be out of purview of the Act.

The delay in framing rules and setting up a regulator have impacted home buyers’ decisions, too. They are confused about which agreement to sign. Are they signing a RERA-compliant agreement for a RERA compliant project?

RERA is aimed at ensuring timely delivery of real estate projects to customers. The three top most issues that RERA needs to address are for the developer community are:  The requirement of RERA that no project be offered for sale without registration would cripple the real estate industry already coping with a slowdown in the market.

Ongoing projects about to be completed may actually get delayed on account of RERA. Customers even after paying up the full amount may have to wait indefinitely.

“A constructive definition of ongoing projects is required,” say developers.

STATUS OF RULES NOTIFIED BY STATES/UTs UNDER RERA 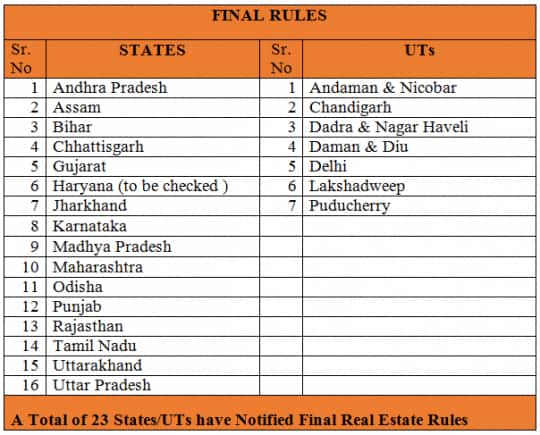