While the government has brought in laws such as RERA, over 80 percent of consumers are of the view that there has not been much change in the property buying experience

In 2017, the realty sector contributed about 6-7 percent to India's GDP. The sector is expected to touch $1 trillion by 2030, becoming the third largest globally.

Apart from its contribution to India's GDP, the growth of this sector holds significance as it is the third largest employer, after agriculture and manufacturing, in the country and presently employs over 50 million people.

Even though the overall business sentiment in 2018 turned positive owing to the current government's focus on affordable housing, regulatory reforms, and infrastructure status to warehousing, there are challenges that continue to exist. Here are some of the major challenges that lie ahead:

Keeping transparency in land ownership rights, maintaining land records, procuring goods and services at the right price are among other challenges facing the sector. It is estimated that on an average $700 million is being paid in bribes at land registrars across India each year, as per the report.

Explained: How Bad Is The NBFC Crisis?

Going forward, the fast-track clearing process and work towards removing bureaucratic delays would be critical.

Other challenges to look out for would include introducing a simpler/single window clearance process to reduce unnecessary construction delays, offer attractive incentives to private developers and controlling inflation and offering tax rebates on construction processes.

Ever since the Goods & Service Tax (GST) regime kicked in in July 2017, real estate developers have been seeking rationalisation of GST. The developers want the Centre to reduce GST on under-construction housing properties to five percent.

At present, the GST is levied at 12 percent on payments made for under-construction property or ready-to-move-in flats where completion certificate has not been issued at the time of sale.

"Real estate developers/investors are facing challenges in raising funds for residential projects as investors are sceptical towards the housing sector, despite the government’s launching of various policies towards affordable housing. Deploying capital is also challenging as home sales remain low, there is unavailability of mature assets and high investor expectations persist," the report noted.

The government may also have to streamline the market considering more equity investments are expected in the future. Despite decreasing private equity investments in the residential sector, non-banking financial companies (NBFCs) have been lending to the housing segment as the cost of capital is lower and many developers prefer debt over equity. However, the liquidity crisis faced by NBFCs has triggered concerns for property developers.

While the government has brought in laws such as Real Estate (Regulation and Development) Act, 2016, over 80 percent of consumers are of the view that there has not been much change in the property buying experience despite the enactment of the new regulatory mechanism, according to a pan-India survey by Track2Realty.

> Tackling pollution
Indian cities are grappling with alarming rates of congestion and pollution. Breathing toxic air and drinking polluted water among others may lead to a fast deterioration in the quality of life of its citizens.

With India projected to add 300 million new urban residents by 2050, it will need to build climate-friendly cities to address the challenge of accommodating the needs of the growing population, according to World Cities Report 2016 - Urbanisation and Development: Emerging Futures report by UN Habitat.

Central to this challenge is the twin bottlenecks of municipal finance and infrastructure finance for transport, electricity, communications, water supply and sanitation in support of production.

DATA STORY: Living in Delhi can cut 9 years of your life, one breath at a time

Going forward, India would have to improve overall access to and affordability of healthcare services to deal with the growing non-communicable diseases (NCDs) due to various pollutants. NCDs, which currently account for 63 percent of all deaths in India, are on the rise owing to unhealthy food and lifestyle choices, across both urban and rural areas, and across income segments.

The country may also have to deal with the impending crises in air and water pollution, waste management and urban congestion. Nine of the world's 10 most air-polluted cities are in India, according to a World Health Organisation's (WHO) study.

People in India would live an average 4.3 years longer if the country met the global guidelines for particulate pollution, according to the Air Quality-Life Index (AQLI) report by the Energy Policy Institute at the University of Chicago (EPIC). The report noted that the effect of pollution on life expectancy is worse than HIV/AIDS, cigarette smoking and even terrorism.

If India meets the national Air Quality Standards or WHO standards for PM2.5 – particulate matter less than 2.5 microns in size, several cities would gain in terms of life expectancy, according to AQLI report. Thus, India needs to deal with these challenges to materialise its positive vision for the future.

> Meeting increased energy demand
It is no surprise that the country's state distribution companies (discoms) are running in losses. States' electricity discoms are set to miss their target of paring down aggregate technical and commercial (AT&C) losses to 15 percent by FY19-end under the government's flagship scheme Ujwal Discom Assurance Yojana (UDAY).

The government had launched the scheme in November 2015 with an aim to financially turnaround state discoms.

DATA STORY | States set to miss UDAY target; here are the 3 major hurdles that lie ahead Compared to the all-India average, demand for power has increased over the years at a phenomenal rate, according to a report by the Institute of Energy Economics and Financial Analysis (IEEFA).

After the electrification of 1.4 crore new households under the Saubhagya scheme (or Pradhan Mantri Sahaj Bijli Har Ghar Yojana ) -- aimed at providing electricity to all, there has been a rise in demand from rural areas.

Read: PM Modi's 'Saubhagya' scheme: Whose fortunes will it brighten?

India completed the electrification all the villages under Deen Dayal Upadhyaya Gram Jyoti Yojana (DDUGJY) through REC (earlier Rural Electrification Corporation) by the Ministry of Power in April last year. This was due to the rampant addition of household connections under the government's Saubhagya scheme, a pick-up in industrial production and a reduction in the average duration of power cuts.

Strong economic growth, an increasing number of electrical connections under the Saubhagya scheme, roll-out of electric vehicles and other similar initiatives will further increase power demand in the future.

In order to cater to the energy needs of the growing urban population, the state may have to take measures to cut losses and boost India's energy production from sustainable sources.

> TechnologyThe pace of change in technological advancements brings forth its own set of challenges. Advances in the information and operational technology is transforming how offices and commercial estates will be operated and managed in India.

According to the report, real estate tech has now grown from the initial phase of software and marketplaces to an advanced phase of technologies, which is helping incumbents of the new era in resolving traditional issues of yesteryears.

"Rapidly evolving technology and changing regulatory landscape is redefining how the real estate business is conducted and managed in the Indian scenario. What’s noteworthy is how virtual tours of property, digital contracts, centralised command and control centres, smart building solutions and cloud storage are quickly becoming common industry practices and are gradually heading to a tech-driven real estate sector,"  Niranjan Hiranandani, National President-NAREDCO and co-founder and MD, Hiranandani Group was quoted as saying in the report.

While the implementation of the available technologies such as artificial intelligence (AI), data analytics and Internet of Things (IoT) is challenging, they can help solve a number of issues that have crippled the real estate sector. These issues include the dependence of homebuyers and renters on middlemen, market volatility, cybersecurity as well as optimisation of resource such as water and electricity to reduce wastage.

Stringent regulations and compliance norms, technology-driven operational complexities, cost of emerging technology adoption, value management, cybersecurity, data-privacy and third-party risk management have become key concerns for every organisation in the world. Overall, these are some of the key concern areas that need to be addressed are: 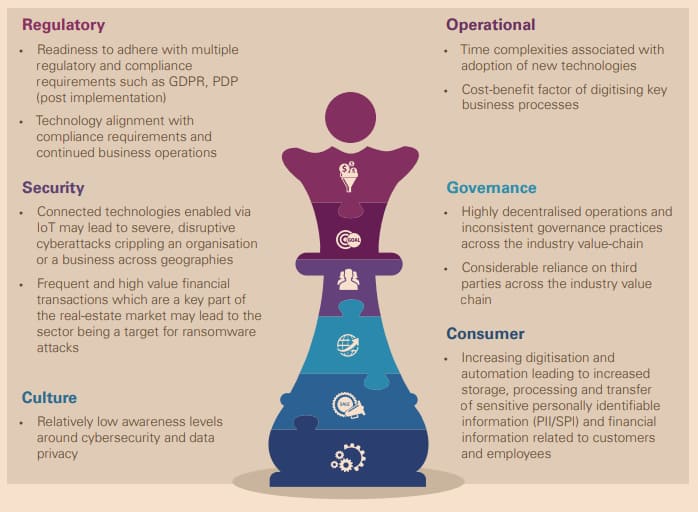