Owing to the upcoming Navi Mumbai International Airport, there was a height restriction of 55 metres (15-16 floors) on buildings in a radius of 20 km around the airport. That has now been relaxed to 160 metres (48 floors).

In a major boost for the real estate market in Navi Mumbai, the City and Industrial Development Corporation of Maharashtra Limited (CIDCO) on July 30 said that all building proposals within a radius of 20 km from the upcoming Navi Mumbai International Airport (NMIA) will now be permitted to build up to 160 metres (46-48 floors), thus removing the cap of 55 metres (15-16 floors).

Owing to this, approximately 150 real estate projects that were stuck are expected to get relief. As of February 2020, buildings were restricted to 55-metres as the Airport Authority of India (AAI) had sanctioned that as the maximum height for grant of a No Objection Certificate (NOC). This was to avoid the creation of possible obstacles within NMIA air space.

In its letter dated July 29, 2022, the Civil Aviation Ministry has informed Navi Mumbai airport officials that the radar structure for the airport will be placed at Dhakale Island in Navi Mumbai.

In a statement issued on Saturday, CIDCO said that, "After tireless effort from CIDCO, the AAI has agreed to commence granting NOCs for buildings with planned elevation of up to 160 metres within a 20-km radius of Navi Mumbai airport. This has paved the way for faster development of buildings in the airport area."

Dr. Sanjay Mukherjee, Vice-Chairman and Managing Director, CIDCO, said, "Valuable co-operation from the Ministry of Civil Aviation and the AAI helped find a satisfactory solution to the technical difficulties related to the height limitation of buildings in the airport’s influence area. The decision to give NOC to constructions in this area will help speed up the work on the project. Also, the project will contribute to the development of the entire Mumbai metropolitan region."

As per aviation regulations, obtaining a height NOC from the AAI is mandatory prior to the grant of any construction approval by local town planning authorities for buildings located within a 20-km radius of any airport. 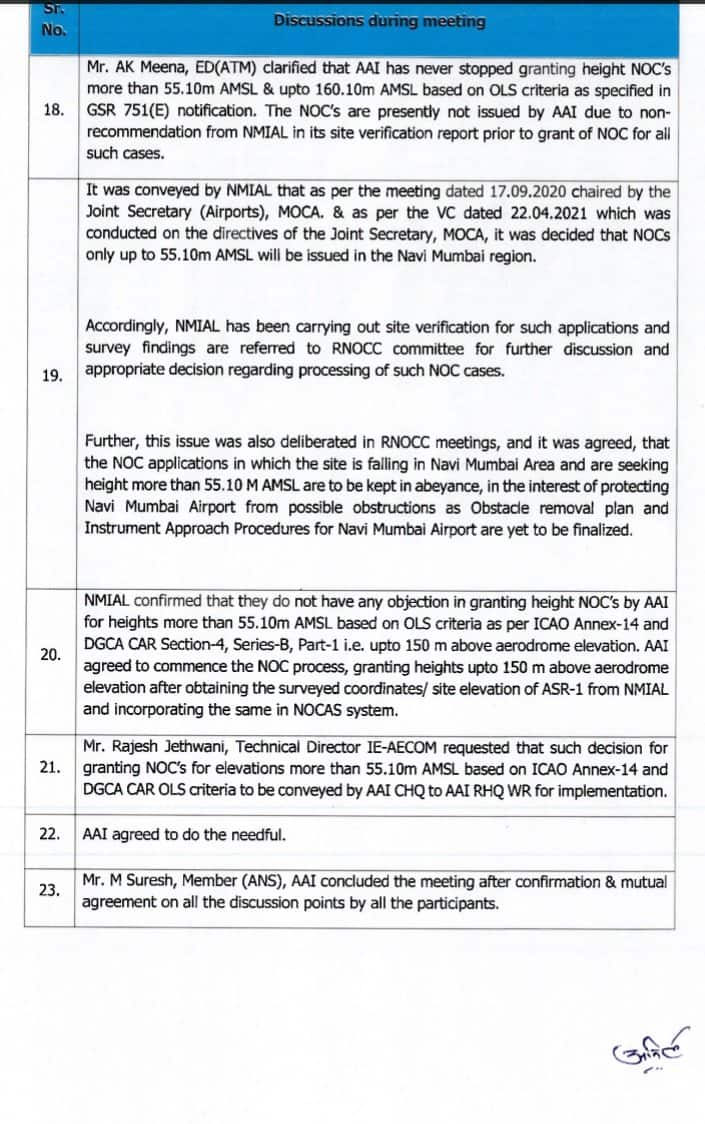 Relevant part of the minutes of meetings between Central and state government authorities where the decision of height relaxation was taken.

About 150 projects were stuck

According to developers, about 150 ongoing projects were stuck. There had been no new proposals since the last two years. The restriction had also put a stop to new redevelopment projects in Navi Mumbai as developers did not find it viable.

Raajesh Prajapati, Founder President, Maharashtra Chamber of Housing Industry- Confederation of Real Estate Developers' Associations of India (MCHI-CREDAI), Raigad, said, "There is no exact figure, but it is estimated that 150 projects were stuck owing to height restrictions. They were stuck for want of commencement certificate (CC) or Occupation Certificate (OC), and no new projects were launched either. The 20-km radius was impacting the entire city of Navi Mumbai. Even redevelopment was totally stuck as it was not viable with the 55-metre height restriction. Areas like Vashi, Nerul, etc., were majorly hurt when it came to redevelopment."

Anuj Puri, Chairman, ANAROCK Group, said, "As announced, the relaxation in height restrictions around Navi Mumbai airport resolves the uncertainties which had beset the area. The height relaxation will lead to faster development and completion of projects in this critical zone, and allow developers to fully utilise the FSI. This will lead to better profitability for builders and improved revenue collections for the state government."