Scheme C funds delivered returns between 8.12 per cent and 9.87 per cent over three years, while five-year returns ranged from 9.04-9.87 per cent.

However, all pension fund managers’ Scheme C funds have improved their performance  over the last three weeks, according to data from Value Research. Birla Sun Life Pension Scheme was the top performer in this category with 9.87 per cent returns, at par with the benchmark, as per data as on October 19, 2020. Kotak Pension Fund found itself at the bottom of the list with 8.12 per cent.

The data pertains to regular, NPS Tier-I accounts that are maintained with the long-term goal of saving for retirement, with the subscribers’ age at vesting – or maturity – being 60 years. Withdrawals in between are generally not encouraged, except for specific reasons. 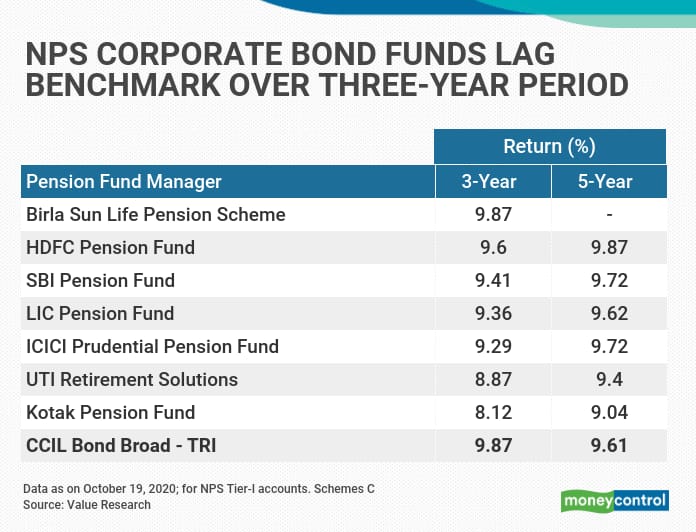 Though the scheme C funds of NPS managers didn’t beat the benchmark, they have comfortably overtaken their mutual fund peers. Corporate bond mutual funds category delivered 7.51 per cent over three years. The five-year return of the category was 7.74 per cent.

Clearly NPS corporate bond funds outperformed MFs convincingly, by as much as two percentage points in some cases. The lower costs charged by NPS fund managers compared to mutual fund may be an added advantage.