UPCOMING EVENT:Special webinar on Highlights of global investing in 2021 and what lies ahead' at 2 pm on 21st January, 2022. Register Now!
you are here: HomeNewsBusinessPersonal Finance

Last week, we highlighted the perils of investing in Ulips  at older ages, as the higher mortality charges can reduce the returns significantly. Today, we highlight the plight of policyholders who had purchased 'Highest-NAV-guarantee' Ulips a decade ago. These Ulips were a rage from 2008 to 2012, before the insurance regulator banned these products. But policyholders who bought these Ulip are realising the impact now after receiving lower-than-expected maturity value.

How does an instrument that promises you equity-like returns and at the same time, protect the downside, sound to you? Some years ago, the insurance industry sold many unit-linked insurance policies (ULIP) that were called ‘Highest-NAV-guaranteed’. Several life insurance companies- LIC, SBI Life, Aditya Birla Sunlife, Reliance Life and so on- sold these products between 2008 and 2012. 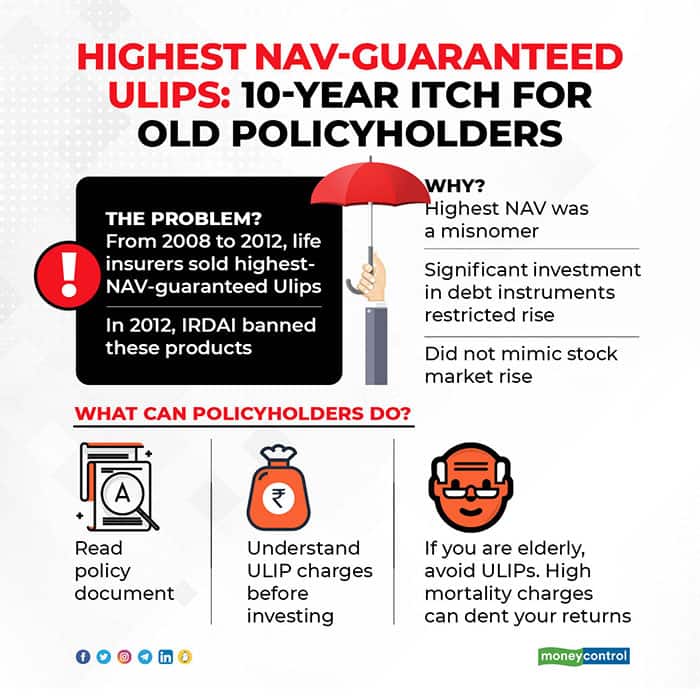 How did highest-NAV-guaranteed Ulips work?

Ulips are market-linked instruments that invest in equity and debt markets. Like mutual funds, they come with net asset values (NAV). The guaranteed-NAV ULIPs offered risk-averse investors the opportunity to participate in the growth from equities, while minimising the losses by investing in fixed income avenues.

Typically, the way such a ULIP worked is that it locked the highest NAV it hit in its first 7-year period. This “high” NAV was the NAV at which your units would be redeemed at policy maturity. This pitch gave gullible policyholders the impression that they were getting the best of both worlds; the upside of equity markets and capital protection, once you hit the market highs.

The reality was different. To ensure that your gains were ‘protected’, these ULIPs actually invested significantly in fixed income instruments. The highest NAV achieved in its first 7-year period, therefore, had little to do with the highs of equity markets.

Acknowledging the inherent scope for miscommunication in the product, the insurance regulator banned these products in 2012. However, by then, many had already bought such Ulips.

Take the case of Hyderabad-resident G Hariprasad, who bought a private life insurer’s Highest NAV guarantee plan in March 2010. He paid an annual premium of Rs 20,000 (a 10-year premium paying policy) and received maturity proceeds of Rs 2.45 lakh. He wasn’t happy about it.

As per the insurance ombudsman portal, his argument was he had bought the policy when the BSE Sensex was around 20,000. By the time his policy had matured, Sensex had crossed 40,000 points. He says he ought to have received double the amount (around Rs 4 lakh) that he had invested (around Rs 2 lakh).

The insurance ombudsman wasn’t of much help for policyholders like Hariprasad.

That wasn’t all. The mortality charges were, to put it mildly, a killer. Hariprasad was 64 at the time of buying the policy, which meant that mortality charges – which eat into a policy’s returns – were higher. His contention that he had not asked for a life cover, was dismissed.

The ombudsman held that being an educated person, he should have read the terms and conditions and returned the policy during the free-look period, instead of leaving it to the insurance agent.

Hariprasad is one of the many guaranteed-Ulip policyholders who felt shortchanged when their policies matured in the last couple of years.

"Industry was perhaps deficient in clearly explaining the risk-reward aspect in this Ulip. It was not meant to be an equity fund-kind of product, but a combination of equity and debt. So, the returns would be a mix of both as well,” says Sanjiv Pujari, who was the appointed actuary at SBI Life then.

Insurance agents were only too happy to keep quiet. And the regulator swung into action far too late in the day. “The policyholders were shown dreams of getting equity returns while the insurance companies knew from the beginning that more than 50-60 percent of the premium would be invested in the debt products. Debt funds used to give returns of around 6 percent at that point of time. If you add charges like policy administration and premium allocation charges, the returns reduced further,” explains Melvin Joseph, Managing Partner, Finvin Financial Planners.

Add to it, the mortality charges, particularly for older individuals, that eat into returns. “With increasing age, the mortality charges increase drastically, that is, if a person aged 60 would have invested in the plan, he may not have even got his premium back because of high mortality charges. The IRDA realised that insurance companies are investing in debt products while showing returns of equity to the customer and abolished the product after 4-5 years,” says Joseph.

What should policyholders do?

The highest NAV guaranteed ULIPs are dead now, after IRDAI banned them in 2012. Most policyholders who bought such ULIPs have little choice now, as their policies would have either matured already or due to mature soon.

Every policy comes with a free-look period wherein you can return policy if you change your mind. Typically, the free look-in period lasts for 15 to 30 days. Use this time to go through the policy documents thoroughly if you haven’t gone them already.

If you get stuck with the policy and later realise that you made a mistake, you can surrender it. You can stop paying premiums, but you can only withdraw after five years. At withdrawal, you will have to pay surrender charges. Until then, your corpus will earn a return of 4 percent per annum.

As a rule, understand what you are buying. “Investors should understand that they cannot get the highest returns while keeping their capital protected. Any product that offers capital protection will come with a debt component and this will cap the returns,” says Raghavendra Nath, Managing Director, Ladderup Wealth Management.

Keep an eye on the charges, lest they take you by surprise later. “While buying Ulips, check the premium allocation, policy administration, surrender charges and mortality charges. A person aged 50 will have to pay high mortality charges than a person aged 30,” says Joseph.

Preeti Kulkarni is a financial journalist with over 13 years of experience. Based in Mumbai, she covers the personal finance beat for Moneycontrol. She focusses primarily on insurance, banking, taxation and financial planning
Tags: #insurance #Irdai #LIFE #NAV #ULIPs
first published: Aug 26, 2021 09:38 am