Trade Spotlight | What should you do with Navin Fluorine International, Praj Industries, Speciality Restaurants on Tuesday?

RSI (relative strength index) plotted on daily time frame has shown a breakout which again confirms that Navin Fluorine has a strong momentum.

The market snapped a six-day winning streak and closed with half a percent loss on July 25 due to caution ahead of the beginning of a two-day policy meeting of the US Federal Reserve on Tuesday. The selling in auto, pharma, select banking & financial services, and FMCG stocks pulled the market down.

The selling was also seen in the broader space as the Nifty Midcap 100 index was down 0.09 percent and Smallcap 100 index declined six-tenth of a percent on weak market breadth.

The volatility increased significantly ahead of the Federal Reserve meeting. India VIX, the fear index, rose by 6.18 percent to 17.68 levels.

Stocks that were in action and outperformed the broader space included Navin Fluorine International, which was the biggest gainer in the futures and options segment, rising 11 percent to Rs 4,208.20, the highest closing level since February 2 and formed a robust bullish candle on the daily charts with significantly high volumes. The upper Bollinger band also expanded with Monday's spurt in stock price, and there was decisive break out long downward sloping trendlines.

Praj Industries share price gained 4 percent to close at Rs 399, the highest closing level since May 2, and formed a bullish candle on the daily charts with decisive breakout of downward sloping trendlines from the previous high points. The stock has been trading in the upper Bollinger band since the June lows.

Speciality Restaurants rose 7 percent to Rs 158.7 and formed a large bullish candle on the daily charts with above-average volumes. It has been forming higher high higher low since after hitting June lows. It has been trading in the upper band of Bollinger band and respecting 5 days exponential moving average.

By looking at the higher time frame charts, we can notice that the stock is currently trading near its all-time high level, this indicates that the stock already is in a good momentum.

On the daily time frame we witnessed a breakout from Descending Triangle, which signs to the continuation of its prior uptrend after a halt.

The breakout was followed by high volumes indicating bullish undertone in the prices. Prices have closed above upper Bollinger band on daily time frame, through this we can infer that the volatility in the prices is increasing for the further upside move.

RSI (relative strength index) plotted on daily time frame has shown a breakout which again confirms that the stock has a strong momentum.

Going ahead we expect the prices to go higher till the level of Rs 4,813 followed by Rs 5,400. We recommend traders and investors to buy this stock with the stop-loss of Rs 3,750, strictly on the closing basis. 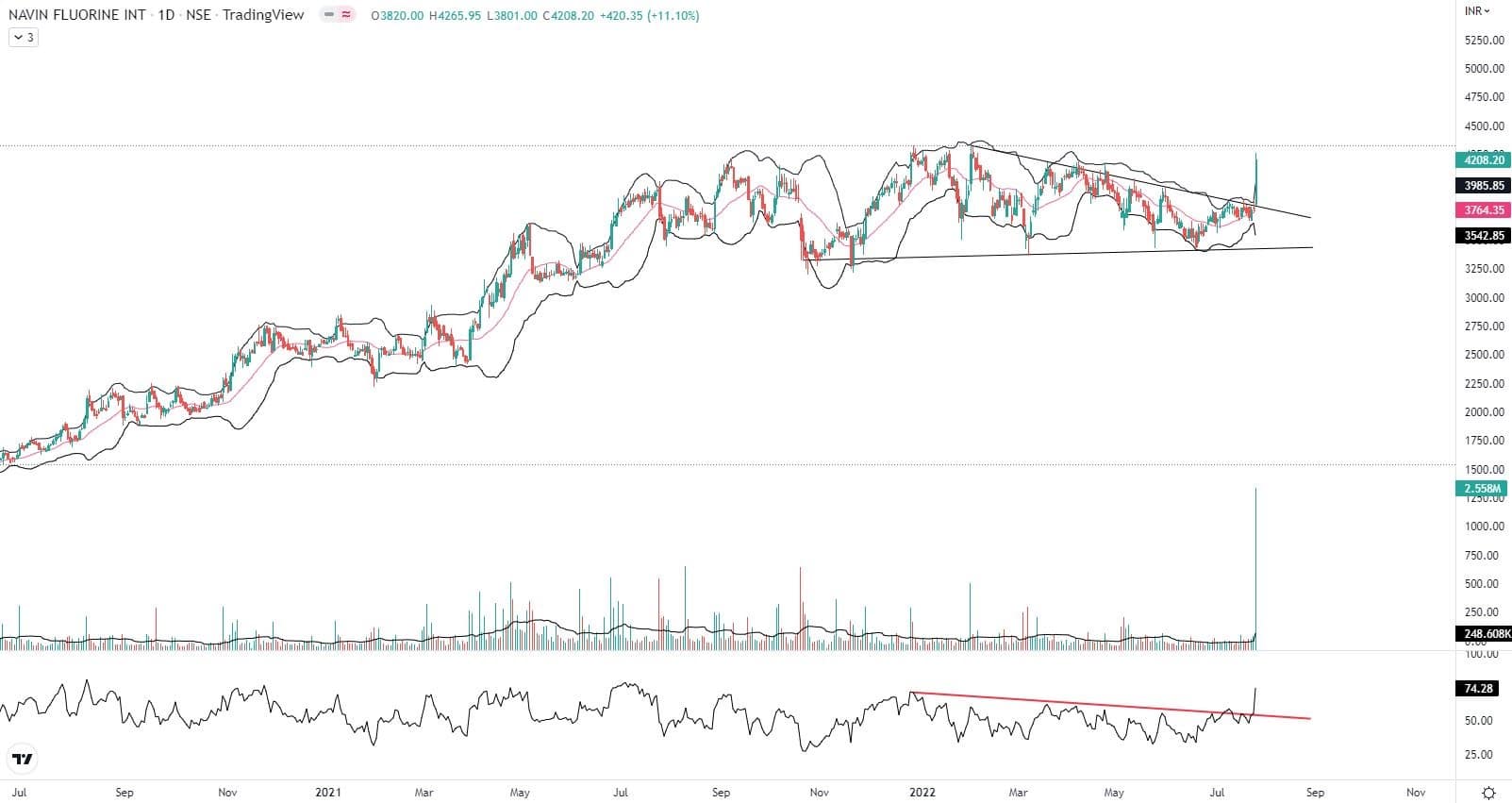 Since May 2021, Praj Industries has been stuck in the broader range of Rs 300 - 448 level. On July 6, 2022 prices witnessed a breakout from pennant pattern, which is a bullish continuation pattern here.

The breakout was followed by high volumes which indicates the bullish under tone of the stock. Prices are roaming near the upper Bollinger band which tells that the prices have the tendency to trend on the upside while indicating the rising volatility by the prices.

The RSI Plotted on daily time frame is rising and have sustained above 50 mark, which is a sign that the prices have strong momentum in it.

We recommend the trader and investor to hold this stock till the price reaches the level of Rs 445, with a stop-loss of Rs 370, strictly on the closing basis. Looking at the daily timeframe chart we can spot that the stock is in a clear uptrend following higher top, higher bottom pattern. We can spot that prices have shown a bounce on the upside while taking support from the trendline which it has been respecting since April 2021 and at the same time around level of Rs 110, we can also observe change in the polarity by the prices.

The 18 EMA and 36 EMA which acted as variable support to the prices have shown a positive cross over on July 8, 2022 indicating bullish undertone for the prices.

Average directional movement index (ADX) is rising and have crossed 24 mark which tells that the trend is gaining momentum and has the tendency to move upward.

We recommend trader and investors to hold this stock till the prices reach the level of Rs 175 followed by Rs 190 level, with a stop-loss of Rs 145, strictly on the closing basis. Disclaimer: The views and investment tips expressed by investment experts on Moneycontrol.com are their own and not those of the website or its management. Moneycontrol.com advises users to check with certified experts before taking any investment decisions.
Sunil Shankar Matkar
Tags: #Market Edge #Navin Fluorine International #Nifty #Praj Industries #Sensex #Speciality Restaurants #Stocks Views #Technicals #Trade Spotlight
first published: Jul 26, 2022 06:22 am