Trade Spotlight | What should you do with IFB Industries, Graphite India, Affle India on Monday?

The market hit more than a week's low but showed some recovery in late trade to close off the day's low on November 18, continuing with the downtrend for the second consecutive session amid lack of domestic triggers and after aggressive comment by Fed officials.

India VIX, the volatility index, went above 15 levels during the day, but later cooled down to end lower by 3.27 percent to 14.39 level, giving a good support to the bulls.

Stocks that were in action and outperformed the broader markets included IFB Industries which rallied 16 percent to Rs 1,084.5 and formed robust bullish candle on the daily charts with large volumes, giving a highest close since January 27 this year. Also there was a strong breakout of long downward sloping resistance trend line adjoining February 10, 2021 and September 13, 2022.

Graphite India shares jumped 7 percent to Rs 390 and formed long bullish candle on the daily charts with high volumes. Also there was Morning Star kind of pattern formation, which is a bullish reversal pattern, if we combine the candles of last three days, and there was a breakout of long downward sloping resistance trend line adjoining May 25, 2021 and November 14, 2022. Even the 'Bollinger band' has seen expansion on both the sides with large bullish candle formation.

Affle India was also in focus, rising nearly 5 percent to Rs 1,287 on Friday, and formed long bullish candle on the daily charts with robust volumes. The stock has seen a break out of long downward sloping resistance trend line adjoining January 14 and November 14 this year, as well as short downward sloping resistance trend line adjoining September 13 and November 14 this year.

The stock has witnessed strong rebounce from its one year "multiple support" zone of Rs 850-900 levels. This buying momentum is accompanied with huge volumes which justify the increased participation near major support zone.

In addition to this, this buying was also observed from 20, 50, 100 and 200 SMA's (simple moving average) support zone indicating positive bias. On the weekly chart, the stock has confirmed "triangular" formation breakout around Rs 1,020 levels on a closing basis indicating shift of trend on the medium term chart.

Investors should buy, hold and accumulate this stock with an expected upside of Rs 1,150-1,280 with downside support zone of Rs 930-900 levels. 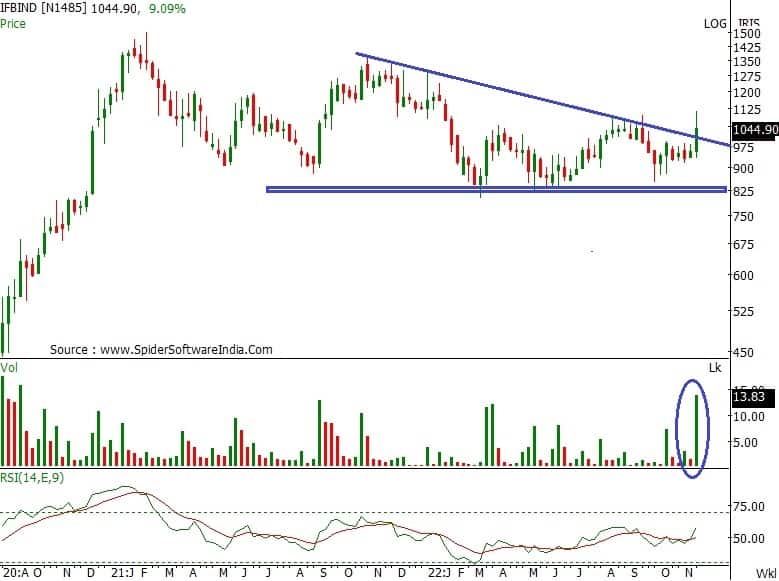 On the daily chart, the stock has witnessed trend reversal forming a higher top and bottom formation. This buy was observed from the past 5-6 months multiple support zone of Rs 350 levels.

Huge volumes on reversal signifies the increased participation at lower levels. The stock is well placed above its 20, 50 and 100 days SMA which reconfirms bullish sentiments.

Investors should buy, hold and accumulate this stock with an expected upside of Rs 450-500 with downside support zone of Rs 370-350 levels. The stock has witnessed a sharp rebound from its 50 percent Fibonacci support zone of Rs 1,145 (retracement of recent up move from Rs 922 to Rs 1,369). This rally is supported with rising volumes representing increased participation.

The stock is positively placed above its 20, 50, 100 and 200 days SMA which reconfirms bullish sentiments.

The daily and weekly strength indicator RSI is in positive terrain which shows sustained strength. 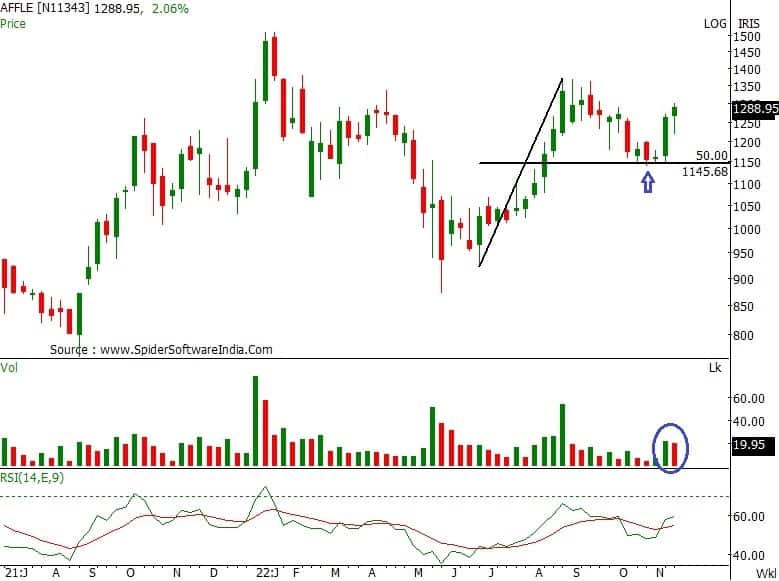 Disclaimer: The views and investment tips expressed by investment experts on Moneycontrol.com are their own and not those of the website or its management. Moneycontrol.com advises users to check with certified experts before taking any investment decisions.
Sunil Shankar Matkar
Tags: #Affle India #Graphite India #IFB Industries #Nifty #Sensex #Stocks Views #Technicals #Trade Spotlight
first published: Nov 21, 2022 06:13 am