Based on the open interest future percentage, here are the 79 stocks, including Mindtree, Persistent Systems, Bank of Baroda, Tata Power, and L&T Infotech, in which a short build-up was seen.

The BSE Sensex declined 1,172 points or 2 percent to 57,167, while the Nifty50 plunged 302 points or 1.73 percent to 17,174 and formed Doji kind of candle on the daily charts, indicating indecisiveness among bulls and bears.

"Nifty is now placed at the important valuation support of around 17,000-16,800 levels. This area was acted as a significant reversal in the past and resulted in a substantial moves in Nifty on either side. Hence, there is a more scope for short term upside bounce," Nagaraj Shetti, Technical Research Analyst at HDFC Securities said.

Shetti feels the short term trend of Nifty is negative. "The overall chart pattern indicates a possibility of upside bounce in the market from here or from near 17,000 mark. The confirmation of reversal pattern and the strength of upside bounce is likely to open a relief rally for the market," he said.

In the broader space, the Nifty Midcap 100 and Smallcap 100 indices fell more than 1 percent each.

Maximum Call open interest of 30.78 lakh contracts was seen at 18,000 strike, which will act as a crucial resistance level in the April series.

Maximum Put open interest of 30.26 lakh contracts was seen at 17,000 strike, which will act as a crucial support level in the April series.

A high delivery percentage suggests that investors are showing interest in these stocks. The highest delivery was seen in Gujarat State Petronet, TVS Motor Company, HDFC, HDFC Bank, and ICICI Bank, among others. An increase in open interest, along with an increase in price, mostly indicates a build-up of long positions. Based on the open interest future percentage, here are the top 10 stocks including Chambal Fertilisers, NTPC, Coromandel International, Torrent Power, and ICICI Prudential Life Insurance Company, in which a long build-up was seen. A decline in open interest, along with a decrease in price, mostly indicates a long unwinding. Based on the open interest future percentage, here are the top 10 stocks including Nifty Financial, PVR, Apollo Tyres, RBL Bank, and The Ramco Cements, in which long unwinding was seen. 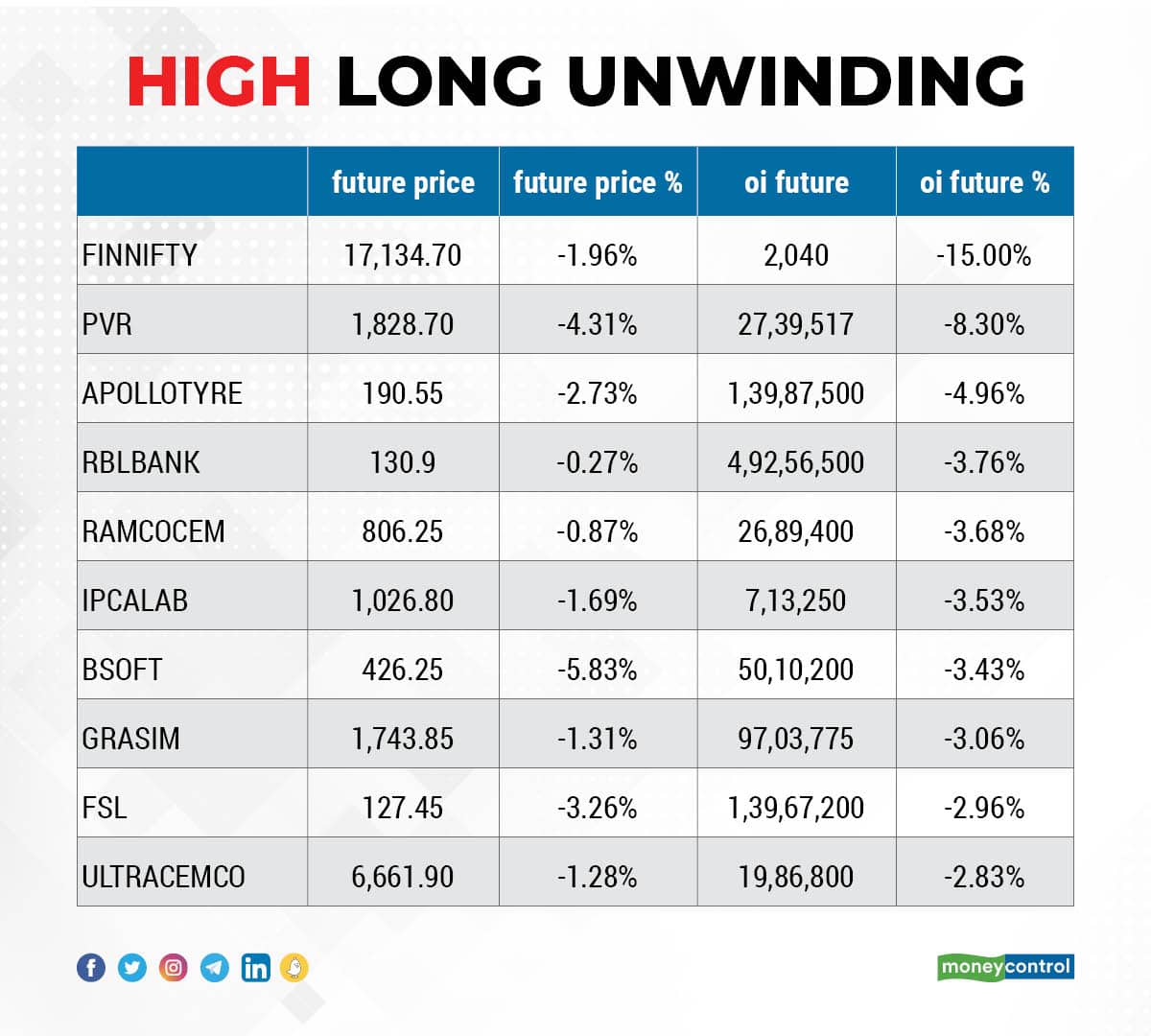 An increase in open interest, along with a decrease in price, mostly indicates a build-up of short positions. Based on the open interest future percentage, here are the top 10 stocks including Mindtree, Persistent Systems, Bank of Baroda, Tata Power, and L&T Infotech, in which a short build-up was seen. A decrease in open interest, along with an increase in price, mostly indicates a short-covering. Based on the open interest future percentage, here are the top 10 stocks including Honeywell Automation, Escorts, Bharat Electronics, Indus Towers, and Syngene International, in which short-covering was seen. TVS Motor Company: Jwalamukhi Investment Holdings sold 32,62,840 equity shares in the company via open market transactions. These shares were sold at an average price of Rs 650 per share on the NSE. Mindtree: The midcap IT company recorded an 8.1 percent QoQ growth in profit at Rs 473 crore with revenue rising 5.4 percent to Rs 2,897.4 crore. Revenue in dollar terms grew by 4.8 percent QoQ to $383.8 million and the growth in constant currency terms was 5.2 percent for Q4FY22, but EBIT margin contracted to 18.9 percent, down from 19.2 percent in previous quarter. The company has recommended a final dividend of Rs 27 per equity share for full year.

Asahi Songwon Colors: The company acquired 78 percent stake in Atlas Life Sciences, a manufacturer of bulk pharmaceutical ingredients (APIs). The acquisition, which has taken place in cash deal for Rs 48 crore, includes a fully operational WHO GMP certified manufacturing facility in Odhav, Ahmedabad, R&D facility, corporate office, and land parcel in Chhatral. Asahi Songwon will acquire an additional 11 percent stake in Atlas each year for the next two years based on performance metrics, taking total equity stake to 100 percent by the end of FY25.

Eveready Industries India: Puran Associates Pvt Ltd & Others acquired 76,534 equity shares in the company via open market transactions on April 18. With this, their stake in the company stands increased to 20.07 percent, up from 19.96 percent earlier.

Ujjivan Financial Services: The company in its BSE filing said the board has appointed Radhakrishnan Ravi, as Chief Executive Officer (CEO) & Chief Financial Officer (CFO) of the company.

Rail Vikas Nigam: The company has entered into an memorandum of understanding (MoU) with Mahanadi Coalfields (MCL), a subsidiary of Coal India. MCL has given project management consultancy contract for rail infrastructure works to Rail Vikas from concept to commissioning.

SJVN: The company has achieved financial closure by signing of loan agreement of Rs 494 crore with Himachal Pradesh State Co-Operative Bank for development of 66 MW Dhaulasidh HEP (DSHEP), in Himachal Pradesh. The project has already commenced its construction activities since May 2021 and moving fast forward to generate 304 million unit in a 90 percent dependable year of clean hydro power from FY 2025-26 with levelised tariff of Rs 4.46/Kwh. The total project cost of Rs 688 crore of DSHEP has to be financed through a debt equity ratio of 80:20.

One stock - Tata Power - is under the F&O ban for April 19. Securities in the ban period under the F&O segment include companies in which the security has crossed 95 percent of the market-wide position limit.

Disclaimer: The views and investment tips expressed by investment experts on Moneycontrol.com are their own and not those of the website or its management. Moneycontrol.com advises users to check with certified experts before taking any investment decisions.
Sunil Shankar Matkar
Tags: #Market Cues #Market Edge #Nifty #Sensex #Trade Setup #video
first published: Apr 18, 2022 09:45 pm