Trade setup for Friday: Top 15 things to know before the opening bell

Based on the open interest future percentage, there were 108 stocks, in which short-covering was seen including Syngene International, Alkem Laboratories, City Union Bank, Shree Cement, and Escorts.

The market continued its southward journey for the seventh consecutive session and closed at a two-month low on September 29, the expiry day for September futures & options contracts, tracking a negative trend in global peers.

"On the daily timeframe, the Nifty closed below its 200 days SMA (16,990) consecutively for the second day with the formation of the lower top lower bottom pattern. Also, the Bollinger Band is expanding and the prices running consistently on the lower edge of the band for the 4th day indicating volatility has increased on the downside," Vidnyan Sawant, AVP - Technical Research at GEPL Capital said.

The momentum indicator RSI (relative strength index) is moving downwards and sustaining below 35 levels, indicating strong bearish momentum of the index for the short to medium term.

As per the overall chart pattern and indicator set-up, the market expert feels that the Nifty will continue its corrective move and if it breaches below 16,788 levels, then it will move down towards 16,653 in the coming future. "Our corrective view would be negated if we see prices sustaining above the level of 17,196 levels," the expert added. The Nifty Bank fell 112 points to close at 37,648 and witnessed a bearish candlestick formation on the daily charts on September 29. The important pivot level, which will act as crucial support for the index, is placed at 37,362, followed by 37,076. On the upside, key resistance levels are placed at 38,109 and 38,569 levels.

Maximum Call open interest of 89.97 lakh contracts was seen at 17,000 strike, which will act as a crucial resistance level in the October series. Maximum Put open interest of 69.1 lakh contracts was seen at 16,800 strike, which will act as a crucial support level in the October series. 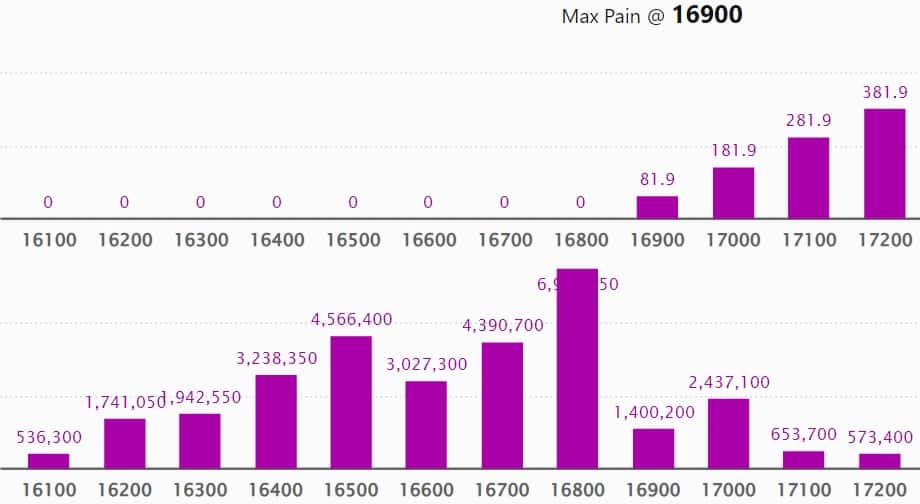 A high delivery percentage suggests that investors are showing interest in these stocks. The highest delivery was seen in SBI Life Insurance Company, Shree Cements, Honeywell Automation, HDFC Life Insurance, and HDFC, among others. Here are the top 10 stocks which saw the highest rollovers on expiry day including Nifty Financial that witnessed 100 percent rollover, followed by Torrent Pharma, Trent, Atul, and Godrej Consumer Products with 98-99 percent rollovers. An increase in open interest, along with an increase in price, mostly indicates a build-up of long positions. Based on the open interest future percentage, here are the seven stocks in which a long build-up was seen.  The list included Torrent Pharma, Tata Chemicals, Axis Bank, Dabur India, and Glenmark Pharma. 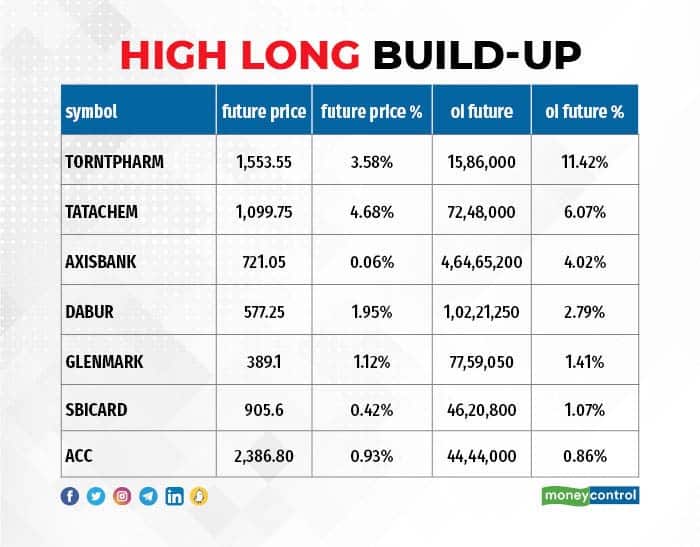 A decline in open interest, along with a decrease in price, mostly indicates a long unwinding. Based on the open interest future percentage, here are the top 10 stocks including Vodafone Idea, LIC Housing Finance, TVS Motor Company, Rain Industries, and Piramal Enterprises, in which long unwinding was seen. An increase in open interest, along with a decrease in price, mostly indicates a build-up of short positions. Based on the open interest future percentage, here are the 8 stocks in which a short build-up was seen. The list included Nifty Financial, L&T Infotech, Mindtree, ICICI Bank, and Lupin. A decrease in open interest, along with an increase in price, mostly indicates a short-covering. Based on the open interest future percentage, here are the top 10 stocks, in which short-covering was seen, including Syngene International, Alkem Laboratories, City Union Bank, Shree Cement, and Escorts. Shreeji Translogistics: Antara India Evergreen Fund acquired 60,000 shares in the company at an average price of Rs 305 per share. Phoenix Mills: Officials of the company will interact with Mondrian Investment Partners.

Indian Energy Exchange: Officials of the company will interact with Ethos Investment Management.

Escorts Kubota: Officials of the company will interact with Toona Tree Capital.

Meghmani Organics: Officials of the company will meet DAM Capital.

Lupin: The pharma company has received approval from the United States Food and Drug Administration (FDA) for its abbreviated new drug application (ANDA), Mirabegron extended-release tablets, to market in the US. Mirabegron is a generic equivalent of Myrbetriq extended-release tablets of Astellas Pharma Global Development, Inc. The product will be manufactured at Lupin's facility in Nagpur, India. The drug had estimated annual sales of $2403 million in the US as per IQVIA MAT data by June 2022. The drug is used for treatment of certain bladder problem.

Ircon International: The public sector enterprise has completed commissioning of doubling work of Hajipur- Bachhwara of 72 route Km including electrification. IRCON was appointed by East Central Railways for this work.

Bhageria Industries: The company said it has entered in a Share Purchase Agreement for sale of 100% equity shares held in subsidiary Bhageria Exim Private Limited, for Rs 1 lakh. After the stake sale, Bhageria Exim will cease to be the wholly owned subsidiary of the company.

Punjab National Bank: The public sector bank has decided to sell its entire stake in Asset Reconstruction Company (ARCIL) at an agreed price. Its shareholding in ARCIL is 10.01% as of now.

Rail Vikas Nigam: The company has received contract for construction of 4 lane highway from Samarlakota to Achampeta Junction, from National Highways Authority of India (NHAI). The contract is a part of Kakinada port to NH - 16 connectivity in Andhra Pradesh under Bharatmala Pariyojana on EPC mode at a cost of Rs 408 crore. Disclaimer: The views and investment tips expressed by investment experts on Moneycontrol.com are their own and not those of the website or its management. Moneycontrol.com advises users to check with certified experts before taking any investment decisions.
Sunil Shankar Matkar
Tags: #Market Cues #Market Edge #Nifty #Sensex #Trade Setup
first published: Sep 29, 2022 09:45 pm