Given the expiry week, there could be volatility with also focus on global cues. If the index fails to sustain Friday's low of 17,710 then we can see further selling pressure, experts said.

The market succumbed to selling pressure finally on Friday after a run-up through eight consecutive sessions. Bears turned active especially after the Nifty50 surpassed the long downward sloping resistance trendline adjoining previous swing highs, including a record high, and moved very close to psychological 18,000 mark. In short, after 18 percent run from June lows, the Nifty50 may be looking a bit overbought.

Hence, there was a formation of Bearish Engulfing pattern on Friday, which engulfed all previous three positive candles, making bears stronger, though on the weekly scale, the index has seen a bullish candle formation for the fifth straight week.

The Nifty50 settled at 17,758.5, losing more than a percent on Friday, and gained 60 points for the week ended August 19. Hence, given the expiry week, there could be volatility with also focus on global cues. If the index fails to sustain Friday's low of 17,710 then we can see further selling pressure, experts said.

"We have closed convincingly below the five-day EMA (exponential moving average) for the first time after July 26. Hence, in the first half of the coming week, any bounce towards 17,800 – 17,875 is likely to get sold into," Sameet Chavan, Chief Analyst-Technical and Derivatives at Angel One said.

The expert advised traders to lighten up longs in this rebound and stay on the sidelines for a while. Aggressive traders can certainly look to initiate bearish bets by keeping a strict exit strategy beyond 18,000.

Also, in case of this probable decline, it is to be considered as a healthy development for the next leg of the rally and hence should be used to go long, he said.

Let's take a look at the top 10 trading ideas by experts for the next three-four weeks. Returns are based on the August 19 closing prices:

The stock is poised above its 20-day, 50-day and 100-day moving averages. The key technical indicators are in favour of the bulls on the medium-term and short-term timeframe charts. This could lead the stock towards its highest level of April 2022.

In case of any decline, the stock will find support around its 100-week SMA (simple moving average).

Continuing its prior weekly rising trend, the stock gave breakout from a descending channel pattern and rose to three-month high of Rs 753. Since week ended July 8, 2022, the stock ended week on a positive note. Rise in volume and future open interest signals that major market participants are in favour of the bulls.

The key technical indicators are positively poised on medium-term as well as short-term timeframe charts.

The stock has potential to move towards its highest level of April 22. In case of any decline, the stock will find support around its extended upper band of the descending channel.

The stock witnessed a trendline breakout, which could take the stock towards its highest level of April 2022. On week ended August 19, 2022, the stock closed on positive note for straight second week and rose to 3-month high of Rs 209.

The stock is positively poised above its key moving averages on daily, weekly as well as monthly timeframe charts. Major technical indicators are in buy mode.

Hence, we believe undergoing positive momentum will accelerate. This could take the stock higher. In case of any decline, the stock will find support around its 20-week EMA (exponential moving average).

The stock climbed from Rs 210 to Rs 291 levels in a short time and that is probably why the time-based correction started. The broader trend of the stock is positive as the stock has returned to 50 percent of the entire trading range of the previous year.

Also, it is trading above the medium-term moving average. Based on it, in the short term, we should be buying it at important support levels. Support for the stock is seen at Rs 255 and Rs 245. The stock has been consolidating between the trading range of Rs 4,000 and Rs 3,800 since the beginning of the month. However, the oscillators are indicating an upside breakout in the near term.

According to wave theory, it is in the 4th corrective pattern on the intraday chart and is due for the 5th wave (uptrend) in the near term. If it sustains above Rs 4,000 level then it will move towards Rs 4,200 or Rs 4,350 level. 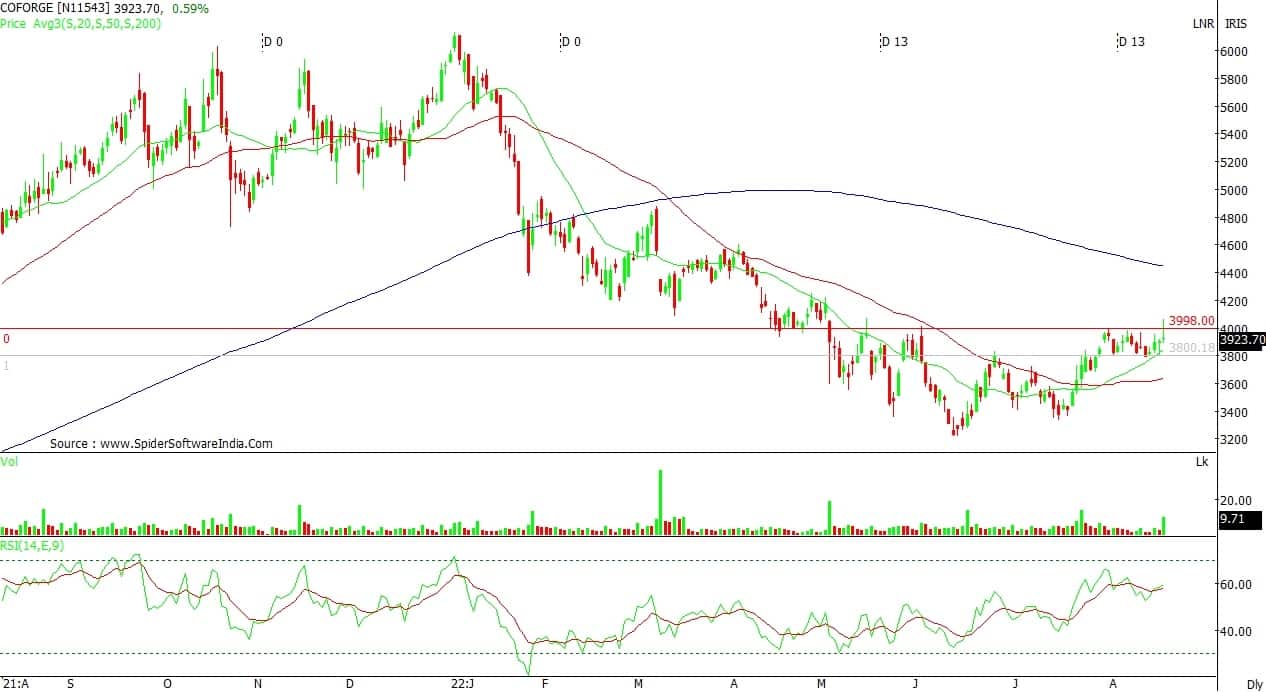 The stock is turning positive on the daily chart. On a monthly basis, it is on the verge of forming a symmetrical triangle and if the stock follows the said pattern, it is currently available at the lower boundary of the formation. The stock price has recently registered fresh all-time high at Rs 753. In the month of July, the stock broke out from the bullish Flag pattern on the monthly chart. Price breakout was accompanied by rising volumes.

The stock is placed above all important moving averages, which indicates bullish trend on all time frames. It has been forming higher top and higher bottom formation on the weekly chart. 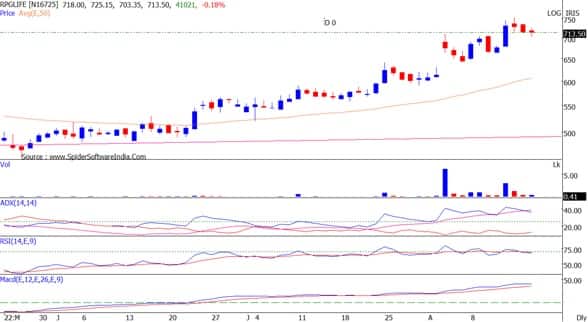 The stock has surpassed the crucial resistance of its 50 days EMA on closing basis. It also surpassed the previous swing high on the daily chart with rising volumes. Oscillators have come out from the oversold zone. The stock has broken down below the upward sloping trend line on the daily chart. Price breakdown was seen with higher volumes, which confirms the probable bearish trend.

The stock has been finding resistance on its 50 days EMA. Indicators and oscillators have turned bearish on the daily charts. 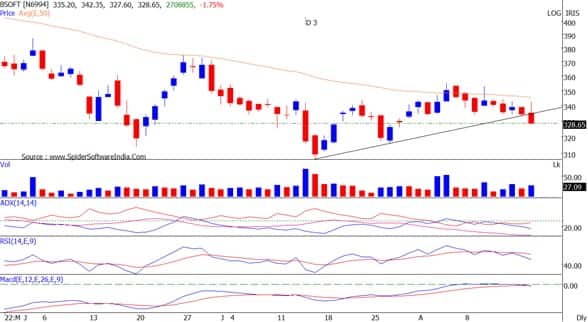 Recently the stock had seen a sharp corrective phase and had underperformed its peers from the banking sector. Along with the market move, this stock too has given a pullback in last one month and the stock is now trading around its resistance zone.

The previous swing low support around Rs 103 which was broken with a huge gap down in mid-June is now expected to act as resistance.

Hence, we advise traders to exit from existing long positions if any from this stock and one can also look to short the stock with a stop-loss above Rs 104 for probable targets of Rs 95-93 in the near term.

Note: The given levels are of NSE cash segment which can be used as reference for trading in futures segment. Jindal Steel has formed a Bearish Engulfing pattern on the daily chart around the 38.2 percent retracement of the previous corrective phase and the momentum readings too are in the overbought zone. So we expect a correction in the stock in the near term.

Traders can look to sell the stock in the range of Rs 404-407 for potential short term targets of Rs 390 followed by Rs 379. The stop-loss on short positions should be placed above Rs 422.

Note: The given levels are of NSE cash segment which can be used as reference for trading in futures segment.