LIC IPO: Govt may sell up to 25% stake; bonus and discount for retail investors on the table

The initial public offering of Life Insurance Corporation of India likely to be bigger as the government plans to incentivise the participation of retail investors by offering discounts and issuing bonus shares. Draft Cabinet note floated to push through amendments in LIC Act.

The much-awaited blockbuster initial public offering (IPO) of Life Insurance Corporation of India (LIC) — potentially India’s biggest ever—could turn out to be much bigger than expected.

A proposal to sell up to 25 percent stake in the state-run insurer — India’s biggest — in one or more tranches is on the cards, said top sources in the government. Retail investors have plenty to cheer because the government is planning a bonus and discount for them, said these sources.

“The Department of Financial Services under the finance ministry has floated a draft Cabinet note for stake sale in LIC to the ministries concerned, SEBI, IRDA and NITI,” said one of the persons cited above. “Dilution of government shareholding from 100 percent to 75 percent in LIC in one or more tranches has been proposed,” said one of the persons familiar with the matter.

All the people contacted for this article spoke on the condition of anonymity.

The Narendra Modi government is hoping LIC IPO will help plug a burgeoning Budget gap, which has further widened because of the coronavirus lockdown. The government is keen on market borrowings to arrest the sharp slump in revenues due to the nationwide lockdown that has ravaged businesses.

The LIC stake sale is expected to play a starring role in this strategy. Earlier, there was talk that only 10 percent of the insurer would be offloaded. 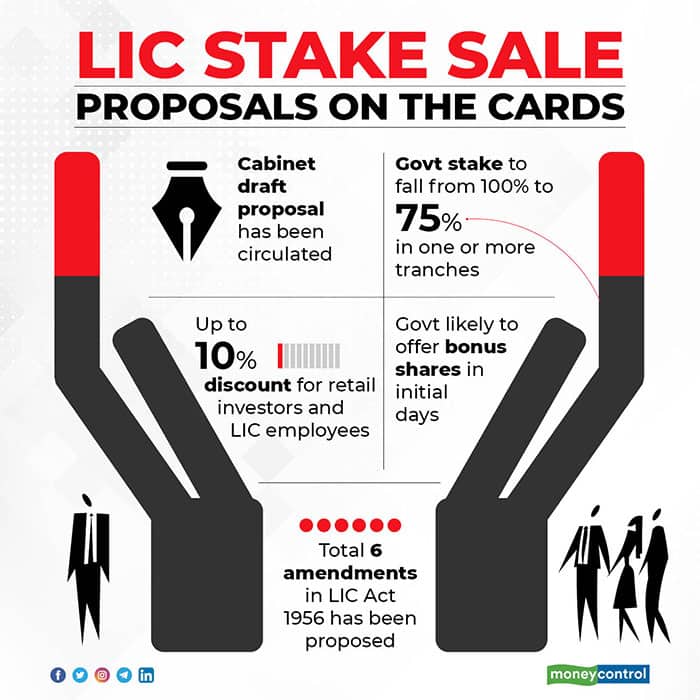 Now it appears that in the initial phase, the government will press ahead with a 10 percent stake sale and the remaining stake sale will be done in more than one tranches. That is because the guidelines of capital markets regulator SEBI require that within three years of listing, the minimum public shareholding should be at least 25 percent, the persons cited above said.

During the stake sale, the government is likely to incentivise the participation of retail investors by providing up to 10 percent discount. This discount may be offered to the employees of LIC, too.

For both — retail investors and employees — up to 5 percent shares may be reserved. However, the final decision on reservation of shares and discount will be taken by Alternate Mechanism (a group of Ministers) that will be formed after cabinet approval.

Another vital part of the stake sale could be a proposal by the government to offer bonus shares in the initial days. As the paid-up capital of LIC is only Rs 100 crore — an inconsequential amount — restructuring of the equity is needed by capitalising the reserves partially.

The government could, therefore, push a draft cabinet note that proposes the capitalisation of reserves by issuing the bonus shares. Government officials also believe that bonus shares will also attract retails investors.

The same draft Cabinet proposal will also propose amendments in LIC Act 1956 before moving ahead with the stake sale. LIC is not a company under the Companies Act, but a statutory body incorporated under LIC Act 1956.

According to the current provision of the Act, LIC is unable to provide authorised capital, issued capital etc. The management and board also will have to be restructured.

For all these purposes, a total six amendments have been proposed in the Act. If the Cabinet approves the proposal, the government may bring the amendments in LIC Act in the upcoming Parliament session.

These amendments should be easily passed because the government is planning to bring this bill as a money bill, for which effectively only Lok Sabha's approval is required. The government has a brute majority in the lower house.
Lakshman Roy
Tags: #IPO #LIC IPO #Market Cues
first published: Sep 7, 2020 02:03 pm