West Coast Paper Mills is looking lucrative on technical fronts. It is bouncing back from around a 50 percent retracement of the previous rally. It is trading above its all-important moving averages in a long consolidation formation.

The Nifty seems to be bouncing back from its 20-day moving average (DMA) after a minor profit booking. The Put-Call ratio had dipped below the 0.8 mark, which may lead to a short-covering rally from the support level of the 20-DMA.

As per option data, the 18,300 Call option has the highest open interest; above this, we can expect a short-covering rally towards the 18,500 level. On the downside, the Put base has shifted to the 18,200 level.

Bank Nifty is continuing its outperformance and respecting its 10-DMA. On the upside, 42,500 is an immediate hurdle, and if the sector index manages to sustain above that level, then we can expect a rally towards 43,000-43,333 levels.

The global markets are also rangebound with some volatility amid some news flows from China. The minutes of the FOMC meeting will be closely watched by the markets. Apart from this, the institutional flows, direction of crude oil prices, and dollar index will be important factors.

The counter is in a classical uptrend, and now it is breaking out of triangle formation to resume its uptrend. The breakout coincides with rising volume, and it managed to sustain above the breakout level despite weakness in the broader market.

It is trading above its all-important moving averages with a positive bias in momentum indicators. On the downside, a cluster of moving averages around Rs 465 level will act as a strong support level. The counter has seen a long consolidation channel breakout on the long time frame and a flag breakout on the daily chart with massive volume, which appears structure profitable. However, it has made a meaningful correction to retest the previous breakout level of Rs 570 after making a 52-week high.

Now it is starting the next leg of a rally, where Rs 700 is an immediate psychological resistance level. Above this, we are expecting a move towards the Rs 800+ level. On the downside, Rs 560 is major support during any correction. 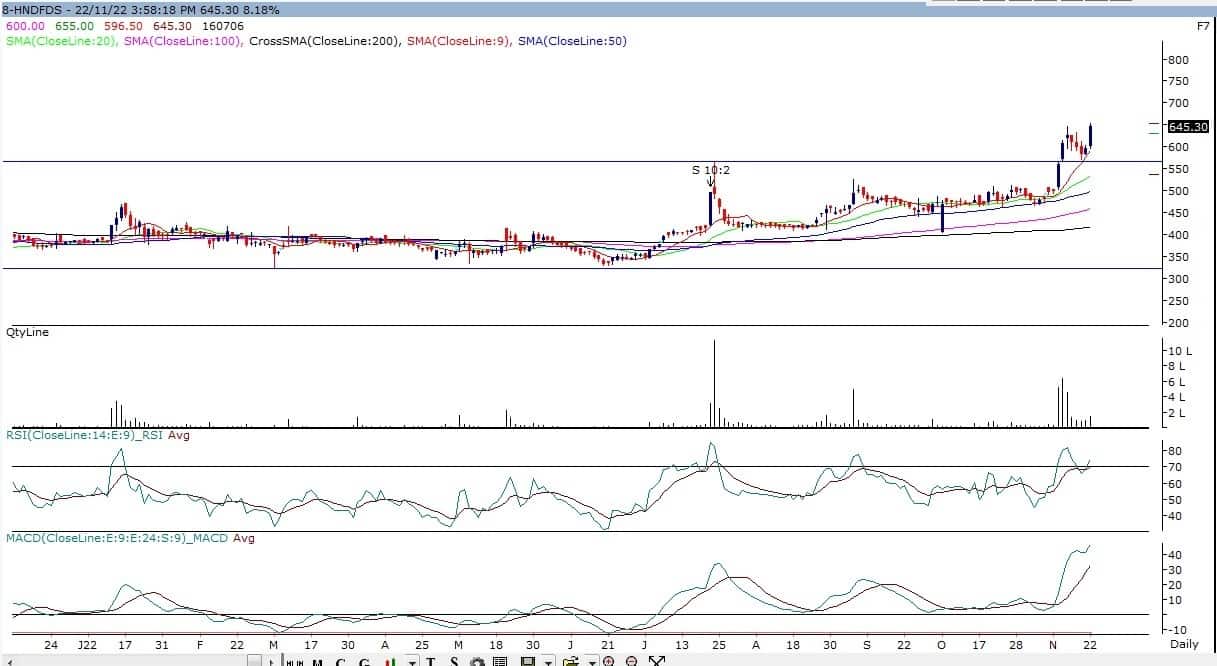 The counter is looking lucrative on technical fronts. It is bouncing back from around a 50 percent retracement of the previous rally. It is trading above its all-important moving averages in a long consolidation formation.

On the higher time frame, there is a channel formation, which suggests much more upside potential in this counter. The momentum indicator RSI (relative strength) is trading above the 50 mark with a positive bias, whereas MACD (moving average convergence and divergence) is witnessing a centerline crossover.

On the upside, Rs 650 will be an immediate hurdle, but Rs 700+ looks like an imminent target in the near term. On the downside, the 50-DMA of Rs 550 is a strong support level.