"There are certain sectors and stocks which remain out of flavor. Strong sectors at least for the next few weeks is autos, auto ancillaries, private banks and IT," says Andrew Holland, Avendus Capital Alternate Strategies.
Moneycontrol News
Feb 27, 2018 / 10:16 AM IST

India market witnessed a smart pullback rally in the past 2-3 session but global volatility emanating from the US Federal Reserve is likely to keep the markets volatile, Andrew Holland, Avendus Capital Alternate Strategies said in an interview with CNBC-TV18.

If the US growth rate accelerates quicker than the market will price that in. In the very short term, we are back to where we were but going forward you can’t have Fed too much behind the curve.

If Nifty breaks above 10,650 will see some more momentum but at the same time if the global markets head down amid fears of rising inflation could weigh. There are a lot of reports that if the US Bond Yields go to 4 percent then the market will correct by 25 percent which I agree, said Holland.

Commenting on the sectors to bet on, Holland said he will stick to only private banks in wake of problems at PNB. Investors should remain cautions if they are investing in NBFCs because bond yields will continue to rise a bit further and the rupee will also come under pressure in the next few months.

We moved the money moved from NBFCs to IT sector. The good news is that growth has started to come back but it is nowhere close to where it was used to be, said Holland. 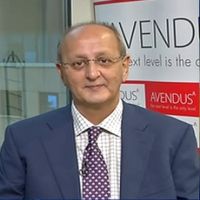 Andrew Holland
CEO|Avendus Capital Alternate Strategies
Commenting on the market strategy, Holland said that his firm has reduced the short exposure. There are certain sectors and stocks which remain out of flavor. Strong sectors at least for the next few weeks is autos, auto ancillaries, private banks and IT.
Moneycontrol News
TAGS: #MARKET OUTLOOK #private banks
first published: Feb 27, 2018 10:16 am