172@29@17@240!~!172@29@0@53!~!|news|business|markets|fed-inaction-wont-end-volatility-nick-parsons-1456777.html!~!news|moneycontrol|com!~!|controller|infinite_scroll_article.php!~!is_mobile=false
Uncover the potential of active and passive investing on 6th October at 4pm. Register Now!
you are here: HomeNewsBusinessMarkets

There is no sign China and resultant slowdown being discounted as yet, says Nick Parsons of National Australia Bank.


There is no sign of market discounting China issues and resultant slowdown as yet, says Nick Parsons of National Australia Bank.

He also sees a very slim chance of a Fed announcing a hike during its September FOMC meet. He, however, does not feel that will spell the end of volatility; hence emerging market will continue to see selling pressure. To soothe fraying nerves, Parsons said one in the current situation, a zero return in a falling  market may not be too bad.

Below is the transcript of Nick Parson’s interview with Latha Venkatesh and Reema Tendulkar on CNBC-TV18.

Latha: What is the sense? Europe is falling. Are we going to see more savage cuts each day we think that China and the resultant global slowdown has been adequately discounted does not appear to be?

A: The slowdown, if anything, seems to be quickening and gathering pace and that is the concern; it is that there is no sign yet from any of the fundamental economic indicators that we have hit a turning point. A good example of that overnight, if you look at the Hong Kong purchasing managers’ index (PMI), not only did that fall to a new cycle low but if you look at the new orders from China component that was the lowest in over 70 months. So, unless and until we see some signs from the real economy that things are turning, then those who are trading financial markets are going to be very reluctant to the commit fresh capital here.

Reema: From Mario Draghi, we gathered two things. One that growth as well as inflation is lower than what he had earlier forecasted but that could drive an extension of the liquidity easing or the support, the liquidity support that they are giving the markets, what should we focus more on? 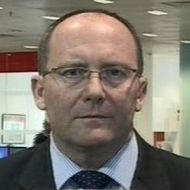 A: He is very clearly nailed his colours to the inflation mast. All policy actions are driven with the need to get back to the close to, but just under two percent target, which the European Central Bank (ECB) has got.

Now, we can be absolutely sure of one thing that inflation will not go up unless prices go up. Prices at the moment are not going up. You look at oil, you look at commodities, you look at all primary products that prices are either flat or still falling. Now, given that he is absolutely committed to getting back to that target then it is no surprise to see the fairly punchy rhetoric that we heard yesterday and a commitment is necessary to do more, either in terms of size or duration with respect to quantitative easing. So, yes, the ECB is still going to be printing money.

Latha: How would you look forward to the US jobs data today? Would a good number spell a lot of volatility or would a number below 2,00,000 give the market a bit of a relief – a relief-rally is a strong word, but I do not know another world?

A: To be honest, I was dreading you asking that question. The simple fact is that if you told most people in the market what the number was, in other words, if they got it now, they would not know what to do.

One thing is pretty certain is that the volatility will continue and the reason for that of course is that on Monday, the US markets are closed. So, we have got the twin prospect on Monday of potentially China withdrawing some of its support for the equity market. That is a theme of local media, that some of state support for local markets might be withdrawn and at the same time, we have got a US holiday. So, if you did want to lighten up, if you did want to trim your holdings of US assets then today is the day you can do it because you will not be able to do it on Monday because the markets are closed. So, we have got a liquidity issue and a timing issue which is going to complicate the reaction to payrolls.

Reema: Is there too much of a chance of a Fed hike at all? How do you approach that event?

A: It is a very low delta probability. I think there is a very slim chance. Here we are barely 10 days away from the Fed's decision. We are currently at the September 4, let us remind ourselves, that they sit down on September 16. So, with no let up in market volatility for the moment, it is highly unlikely that we would see a move from the Fed almost irrespective of the data because as your colleague said, markets are kind of chasing their tails here.

If we get strong data it leads fears of a tightening, we get a market sell-off which means tightening cannot happen. So, we are going to go round and round in circles for every one of the next 12 days.

Reema: If we do not get a Fed hike in September when the Federal Open Market Committee (FOMC) meets, do you see a rally for the global equity markets and will the rally be sold into given the China concern still are likely to stay?

Latha: So, no chance that the selling will just get exhausted, market feels so bombed out that it may not have the energy to sell more?

A: I do not feel there has been what we would call, capitulation yet. I do not think we are at that period of excessive gloom that usually characterises turning points. It does not yet feel that we are at that stage.

Latha: What do you do in the meanwhile, you stay in cash, which cash, dollars and is emerging markets going to be the bad word, India included?

A: There is nothing wrong; I have long maintained that there is nothing wrong with a zero return. Zero return when prices are falling is actually a positive real return and the other point to note is that if you look at most of the indices, if you had made zero this year, that would probably make you a top quartile performer.

India is down 8.1 percent, South Korea is down 1.5 percent, even the Shanghai composite year-to-date (Y-T-D) is now down 2.3 percent, so zero would have made you a top quartile performer, something to reflect on. You don’t always have to make positive returns to look good in this market.