Carnage in broader markets; over 200 stocks in the small-cap space down 10-40%

What a week for Indian markets! Bulls tried to make comeback but failed. And although they helped pare some losses towards the closing of the week in the benchmark indices, we cannot say the same for the broader markets.

The S&P BSE Sensex fell 0.3 percent while the Nifty50 was down by 0.97 percent for the week ended March 27, but the big carnage was seen in the broader market space where the S&P BSE Small-cap index was down 6.09 percent, and the S&P BSE Mid-cap index plunged 5.4 percent in the same period.

As many as 230 stocks in the S&P BSE Small-cap index gave negative returns in the range of 10-40 percent. These include names such as Indiabulls Ventures, Jindal Saw, Alok Industries, Simplex Infrastructure, Future Consumer, PNC Infra, Pennar Industries and Steel Strips among others. 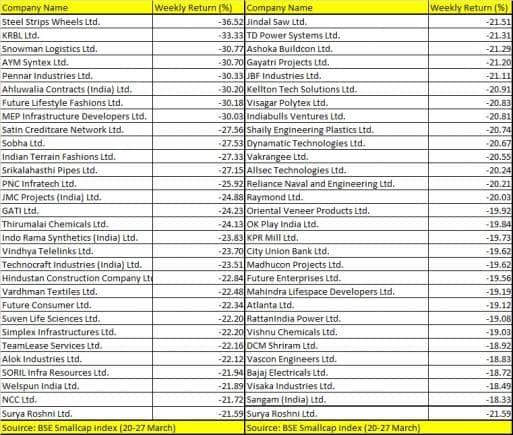 It was an eventful week for Indian markets with a flurry of stimulus packages from central bankers across the world. The United States government also gave a nod to the $2 trillion packages which was signed by the US President Donald Trump on March 27 and back home, a flurry of stimulus measure were announced by Finance Minister Nirmala Sitharaman and the Reserve Bank of India (RBI) Governor Shaktikanta Das.

The government is trying to address the problem of slowdown which looks imminent. The commentary from the RBI was positive as it assured investors that the central bank is ready to take any measures whenever the situation arises.

The bounce back is encouraging but experts advise not to mistake it with a ‘reversal’. As long as the Nifty50 holds 7,511 which was the swing low March 24, things are likely to stay on the upside, however, a breach of the same could lead to further profit-taking.

"After the US’ $2 trillion stimulus, a whopping 9.5 percent of its GDP, Germany granted 21.1 percent of its GDP as a stimulus, and China granted 2.8 percent, India’s stimulus quantum looks small, but nonetheless is arriving in piecemeal packets regularly,” Jimeet Modi, Founder & CEO, SAMCO Securities & StockNote said in a note.

"While these are temporary steroids for the economy, nobody can estimate the intensity of the pain that this pandemic and lockdown is going to befall upon our economy and businesses," he said.

Modi further added that earnings contraction in the next two quarters is certainly a given with tourism, airlines, hotels, metals, retail outlets not under essential goods getting impacted the most, and investors must not mistake this bounce as a sharp rally, but a normal correction which will face selling pressure at higher levels.

Equity benchmarks continue to trade with high volatility as Nifty during the previous week oscillated in a 1,500 points range and closed marginally lower by 1 percent at 8,660 to extend the decline for a six consecutive week.

The broader markets relatively underperformed as the Nifty mid-cap and small-cap lost 7 percent and 8 percent, respectively. The weekly candle suggests that the selling pressure might just be abating, and the index could consolidate in the coming week.

"Going ahead in the coming truncated week we expect the index to consolidate in the broad range of 9,000-7,800 amid stock-specific action with elevated global volatility aiding the index to bring some stability in the market," he said.

Shah further added that a retracement towards 8,000-7,800 (80 percent retracement of last week’s gain) should be utilised as an incremental buying opportunity.