Finance minister Arun Jaitley introduced the much talked about long term capital gains tax (LTCG) on sale of listed securities on gains of over Rs1 lakh.

The move surprised D-Street as most analysts were factoring in a change in definition of ‘Long Term’ to 2 or 3 years from 1 year.

Jaitley, introduced a long-term capital gains tax of 10 percent if the gains exceed Rs 100,000 without allowing the benefit of indexation. However, all gains till 31st January 2018 will be grandfathered and short term capital gains remains unchanged at 15 percent.

For example, if the equity share is purchased 6 months before 31st January 2018 at Rs100 and the highest price quoted on 31st Jan is Rs120. There will be no tax on the sale, if the stock is sold after 1 year.

"The much-anticipated introduction of LTCG is now back with a new avatar. As we know in tax legislation, this could only get worse over a period of time with every successive budget diluting the original commitment of taxing long-term gains,” Milind Kothari, Managing Partner, BDO India.

Long-term capital gains were made tax exempt in 2004. The move to exempt capital gains tax on stock trading was aimed at aligning rules with major investment source destinations such as Mauritius.
The new treaties stipulate that India will levy capital gains tax on investments routed through these countries—a move seen as an attempt to clamp down investors to evade taxes by routing investments through paper or post-box companies registered in these nations.

The widened definition of long-term could, however, spark a major portfolio overhaul of domestic and foreign institutional investors who move around their portfolio many times in three years seeking higher returns. These investment decisions are backed by research that generally tracks a 52-week return history.

Here is how D-Street reacted.

He said that the proposal to levy long term capital gains tax on equities at the rate of 10% is a negative surprise but not the limited rate with grandfathering of purchases up to Jan 31, 2018 would mitigate the adverse impact to a large extent.

"Overall, we believe that the focus would revert to corporate earnings with little impact of Union Budget on bond yields and equity markets," he said.

“A good last budget before the elections though the fiscal deficit at 3.5% was definitely higher than expected. The rural & farmer focus was expected and necessary. Other than a kneejerk reaction, equity market will not be impacted in the medium and the long term as it is still the only real investment opportunity available. FII investments may be affected in the short run as the issue of tax compliance come up which increases operational cost. Likewise mutual funds may see a brief impact but the grandfathering till the 31st January helps. The real disappointment was the continuation of STT along with Itcg, logically only one should be there.”

From an equity market perspective the reintroduction of Long Term Capital Gains Tax (LTCG) is a big negative. Security Transaction tax (STT) was introduced for its simplicity of collection and assured revenues. With the reintroduction of LTCG and collection of STT equities are bearing the brunt of both taxes together. The fiscal deficit number at 3.3% looks marginally higher than estimates which could disappoint the bond markets.

LTCG introduction @10% on equity is a negative without removal of STT. Would have preferred increasing STT or increasing the tenure (to say 2 years), rather than change the tax rate; so as to reward long term investing.

“LTCG exemption was an attraction for new investors into equity/equity mutual funds and brought funds from other low paying avenues. Rising interest rates domestically and tax on LTCG could result in minor reversal of this trend. Reaction of FPIs and the bond markets locally to the 3.3% fiscal deficit proposed in FY19 will be keenly watched in the background of rising rates abroad.” 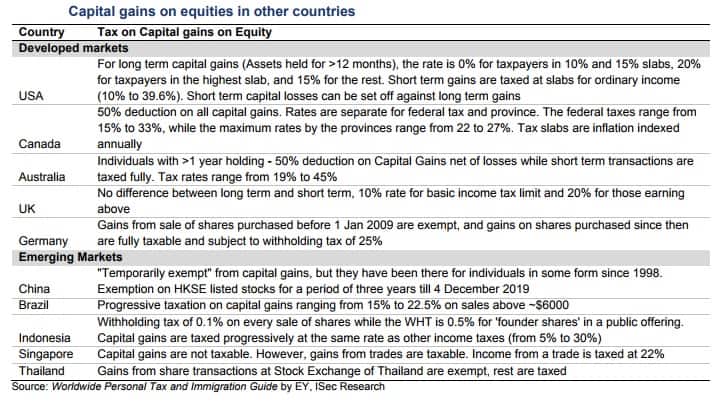