Upcoming Webinar:Watch a panel of experts discuss: Challenges of continuously evolving regulation for Cryptocurrency, on 7th July at 3pm. Register Now
you are here: HomeNewsBusinessIPO

Suryoday Small Finance Bank has kicked off the process to raise around Rs 1,000 crore through an initial public offer (IPO).

Mumbai-headquartered Suryoday Small Finance Bank backed by the likes of International Finance Corporation (IFC) and HDFC has kicked off the process to raise around Rs 1,000 crore through an initial public offer (IPO) and has shortlisted four merchant bankers, sources with knowledge of the matter told Moneycontrol.

"Axis Capital, ICICI Securities, SBI Capital and IIFL (India Infoline) have been shortlisted for the IPO, which is primarily aimed at meeting RBI's regulatory norms for the niche segment," the source said. "The listing will be a mixture of primary and secondary issue of shares and the plan is to file the DRHP (draft red herring prospectus) before June-end 2020 and launch the IPO in October during the Diwali period."

Axis Capital and ICICI Securities declined to comment in response to a query from Moneycontrol. Moneycontrol is awaiting an email response from Suryoday Small Finance Bank, IIFL and SBI Capital and will update this article as soon as they reply.

Under RBI norms, small finance banks with a net worth of more than Rs 500 crore are required to list within three years of launching operations.

Suryoday Small Finance Bank is required to list before April 2021.

"The proposed IPO will also provide a complete/partial exit to select investors and private equity funds and a portion of the proceeds may be used for growth capital,” said a second source Moneycontrol spoke to.

The company has a simplified structure, unlike a holding company structure like some of its peers. It has better urban coverage and at 45 percent, its cost-to-income ratio is amongst the lowest in the small finance segment, with rivals in the 60-65 percent range, the source added.

Small finance banks have been established with the objective of financial inclusion by serving small business units, small and marginal farmers and small and micro industries. The cost-to-income ratio is critical for determining the profitability of a bank.

According to Suryoday’s 2018-2019 annual report, Sarva Capital is the single largest non-promoter shareholder with 7.5 percent stake.

The firm’s deposit book grew by more than 100 percent to reach Rs 1,600 crore in the fiscal. Retail deposits accounted for 50 percent of the book.

"Given the RBI requirement to list within 3 years of achieving Rs 500 crore net worth, there are 5-6 small finance banks, which are required to list in 2020 and 2021,” said Prashant Gupta, Partner and National Practice Head (Capital Markets) at law firm Shardul Amarchand Mangaldas.

Gupta added that the opportunity has been less-than-compelling for small-finance banks, which had a holding-company model (such as Ujjivan and Equitas).

“But AU Small Finance Bank, which was the first one to list in 2017 has done very well. The others (in which the main company is listed instead of the holding company) should attract a lot of interest given that a number of them are backed by PE firms with sustainable businesses," Gupta added.

AU Small Finance Bank has been the star performer in the small finance bank segment with its stock rising 125 percent compared to its listing price.

Equitas and Ujjivan Small Finance Bank, on the other hand, have underperformed, with their share prices dipping by 21 percent and 15 percent respectively. 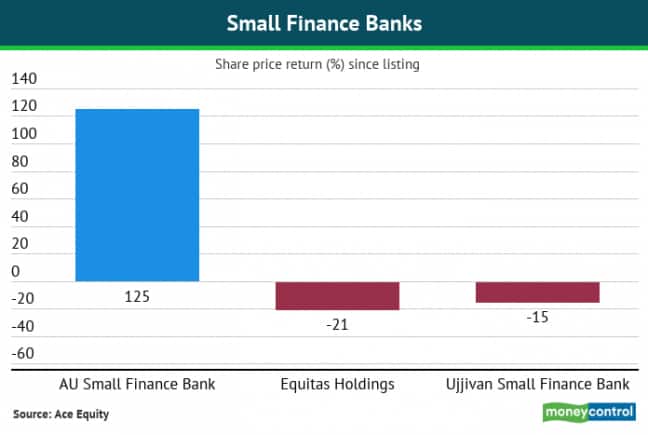