How are India’s unicorn startups changing?

2020 has seen 6 internet startups achieve the billion dollar valuation- a surprise for many considering it is the year of the pandemic. But over the years, some unicorns have also become notorious for making losses endlessly, having large valuations collapse and more. But are we seeing a new kind of unicorn now?

In one way or another, unicorns have defined India’s startup ecosystem. The large deals and larger valuations are touted when venture capitalists pitch to raise new funds. The number of unicorns are seen as an indicator of the ecosystem’s maturity. If billion dollar companies are getting created consistently, and quickly, the fundamental market is promising right?

Moneycontrol analysed India’s 30 odd unicorns- based on their sectors, number of years they took to get to the valuation, investors, and more- with data from Venture Intelligence, to figure out what has changed in the last decade- the good, the bad and everything beyond.

A billion with less capital raised

One indicator of the quality of a unicorn startup is how much money has it raised to get to the billion dollar valuation. The lesser, the better, because raising say $600 million dollars to be valued at a billion, may be more about funding math, and less of quality. If a startup raises $600 million in equity, it is likely to be valued at over a billion, irrespective of quality of the company. On this metric, startups seem to have improved this year.

On an average, in 2020 a startup raised $262.5 million to be valued at a billion or more, the lowest in three years, and significantly less than the $409.3 million and $401 million in 2019 and 2018 respectively. Among this year’s unicorns, Nykaa, software startup Postman and payments firm Razorpay have raised $104 million, 208 million and $212 million respectively enroute to becoming unicorns. Postman in fact is valued at $2 billion.

Compare this to say online grocer BigBasket, which raised $656 million till 2019- when it became a unicorn, or eyewear retailer Lenskart, which raised $668 million enroute to being valued at $1.5 billion.

Business-to-business startups- which make their money from enterprises, have generally become unicorns by raising less money than their consumer internet peers. B2B firms- such as logistics firm Delhivery or software firms Druva and Icertis generally have stable revenue from customers, tend to spend less on marketing, and in case of software can go global very early on- making them a safer bet than some consumer internet or B2C startups, which can raise money at dazzling valuations but can fall just as fast.

The maturity of India's startup ecosystem is also depicted by the sectors throwing up unicorns. India's earliest unicorns were almost exclusively in ecommerce- Flipkart, Snapdeal and ShopClues. That was followed by Paytm in digital payments, Ola in ride hailing and Zomato and Swiggy in food delivery, models successful in China and the United States.

To some extent this wave still continues as vertical ecommerce players acquire scale. Nykaa, BigBasket, and FirstCry are all Indian unicorns, but their business models are globally relevant and have produced dozens of unicorns globally.

Among vertical ecommerce players, the startups which attained success are the ones which brought in multiple aspects- a definite need in the country, and the scope for digitisation to reduce cost of operations and scale. Players like BigBasket and Nykaa trumped their competitors because of these factors playing in its favour.  But many of these ‘online’ brands quickly realised that a lot of India is still entrenched in the offline ecosystem, and went omnichannel- running brick and mortar stores and an ecommerce platform- a strategy which has paid off handsomely so far.

More B2B in the mix

Also take the case of Billdesk and Pine Labs, they are typically not startups. Both were founded a couple of decades back and have been making money consistently. But now buoyed by the massive growth in the digital payments ecosystem, these startups attracted strategic investments and catapulted their valuation to unicorn levels and beyond.

In the internet space too, unicorns in newer spaces started emerging. Byju’s in online education, Dream11 in fantasy gaming, and Postman in APIs- a key part of app development. These sectors benefited a lot during the pandemic. Edtech emerged as the digital payments of ‘Demonetisation’. Then again gaming slowly became massive in India. Leveraging the cricket fever, these platforms gained massive user base across the country.

Will these companies manage to hold the momentum?

One of the biggest criticisms against the unicorn culture- of celebrating paper valuations and large deals- is that many of these unicorns have seen a fall as fast as their rise. In India too, at least three unicorns have seen their valuation collapse. ShopClues was sold last year for $80 million, while Snapdeal’s valuation is a shadow of its peak of $6.5 billion. Classifieds portal Quikr, a unicorn in 2015 saw its valuation slashed 50% by its own investors last year. 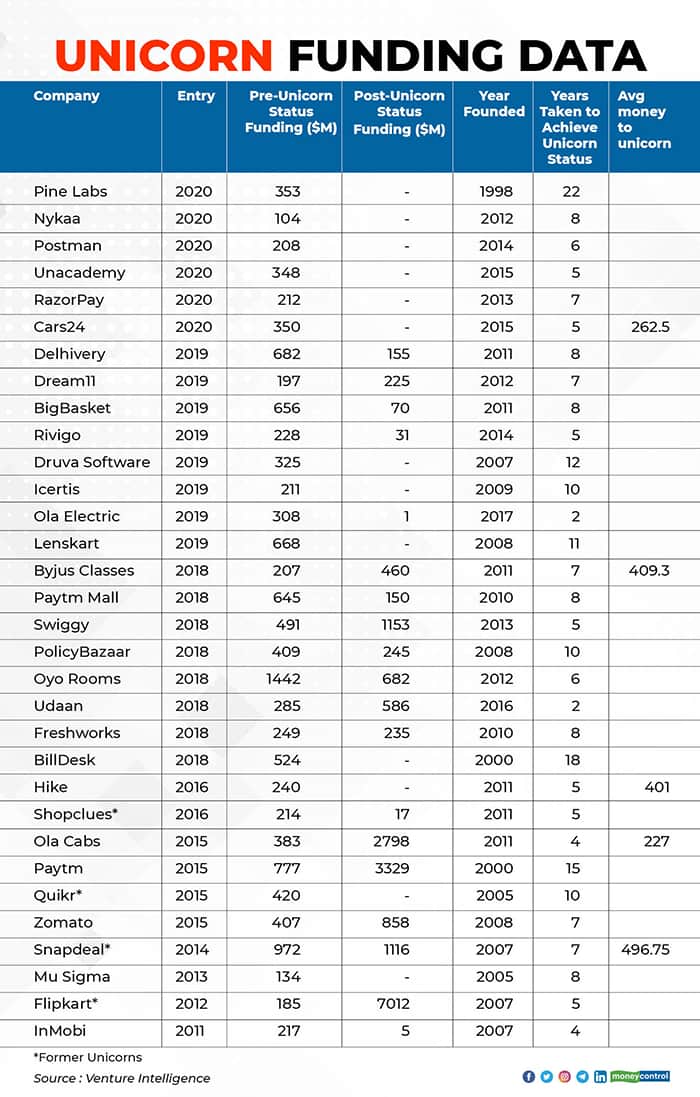 This was also because even as a unicorn and mature company, many startups still burned money in pursuit of growth, with profits nowhere on the horizon. This is especially true of the consumer internet firms.

A top VC in the space who specialises in late stage deals, pointed out that a unicorn valuation looks good on presentation slides, but what is indeed required for these companies is to build stable and sustainable businesses.

"Valuation is just one metric, what I am looking for is 'value' if you are a gross margin business can you find good strategic investors in the future to give exit to your early investors, that is the important question for me," said Pankaj Makkar, managing director, Bertelsmann India Investments.

But recent unicorns do look more sustainable. Of this year’s unicorns- Pine Labs, Nykaa, Postman, Unacademy, Razorpay and Cars24- nearly all of them are operationally profitable- a rare sight earlier when Flipkart, Ola, Paytm and Oyo Rooms became unicorns.

Byju’s, insurance marketplace Policybazaar and Dream11- unicorns in the last two years- are all profitable or close to profitability.

Take the case of Razorpay, the Bengaluru based startup broke into the club a month back mainly buoyed by the overall growth of the digital payments ecosystem.

But Razorpay being a B2B player, has managed to keep its burn restricted. Secondly, Razorpay has been quick to innovate.

“The breakneck speed at which Razorpay innovates has helped multiple startups get their business up and running in no time. No wonder companies want to work with Razorpay,” said the founder of a fintech startup who has closely tracked the company, requesting not to be named.

Razorpay has now broadened its base into neo-banking- digital account opening, payouts for businesses and many others. One industry observer remarked that Razorpay got the valuation mainly because of Razorpay X- the banking product rather than just the payment gateway business.

Similarly, Pine Labs, under new CEO and fintech veteran Amrish Rau, has gone beyond card payments. The Sequoia Capital-backed firm is building solutions for merchants, helping with lending, EMIs, offers, UPI and more. It has quickly deployed its smart Point of Sale (PoS) solutions at large merchant outlets with added features, ensuring that its customers stick.

Further, its foray into South East Asian countries has helped too. This protects the company from regulatory stress in any one country. For instance, the zero MDR mandate on UPI and RuPay cards in India had the potential to affect Pine Labs’ revenue. But what Pine Labs has done is expanded to other countries to ensure its overall revenue streams are protected.

With investments from PayPal Mastercard, global payment giants there is definite value in Pine Labs’ business.

Newer startups, especially those which have scaled in the last three to four years have a common reason behind better unit economics.

“The newer unicorns also look more sustainable because they have an ecosystem ready for building. Digital payments, cheap and fast internet, and faster adoption than ever have enabled better unit economics. So the newer unicorns need to spend less on customer acquisition,” says Anil Joshi, managing partner at Unicorn India Ventures, an early stage investor.

Now will these factors help the likes of these companies maintain its valuation and keep the growth march on? Perhaps that only time will tell, but investors crystal gazing are surely looking at these signals to decide on the value of a company.​