How a prolonged Afghan crisis could derail India-Central Asia connectivity

With the Taliban having an air arm and in possession of surface-to-air missiles, airlines are likely to give Afghanistan a wide berth, increasing travel time to Central Asia

The weekly flight between Tashkent and Delhi took two-and-a-half hours to reach Delhi on August 10. The same flight took four hours and nine minutes on August 17. Kabul had fallen to the Talibani fighters and the airspace above Afghanistan was uncontrolled. As airline after airline decided to shun Afghan airspace over safety concerns, the flight on August 17 took a circuitous route, flying over Turkmenistan, Iran and Pakistan before entering Indian airspace. A normal route sees the airline operate over Afghanistan and Pakistan before entering Indian airspace.

This is the second time in two years that the airline has had to take a circuitous route; the first being in 2019, when Pakistan closed its airspace to flights originating and terminating in India after the Balakot strike by the Indian Air Force.

This year marks the thirtieth year of independence for former republics of the Soviet Union. When the Soviet Union disintegrated, a few of these five ‘stans’ from Central Asia (Uzbekistan, Tajikistan, Turkmenistan, Kazakhstan, Kyrgyzstan) had a direct air link with New Delhi.

Successive governments from India have tried courting the governments in Central Asia but trade hasn’t grown by leaps and bounds. Most countries had a difficult visa regime and that meant even tourism was out of bounds. All of this had started to change recently. Indeed, pre-Covid-19, all the five ‘stans’ were connected to India, through flights operated by the airlines of the respective countries. No Indian carrier flew to any of these five countries.

Kazakh airline Air Astana started operations to India in 2004 and has come a long way, investing in the network over the years. In the early days, Air Astana, Uzbekistan Airways and Turkmenistan Airlines were looking at cheaper flight options from North India in general and Punjab in particular. Tajikistan-based Somon Air launched non-stop flights between capital Dushanbe and New Delhi in December 2019 while Avia Traffic Company operated flights between Bishkek, the capital of Kyrgyzstan, and New Delhi.

Data released by the Indian government shows that India had a trade deficit with Kazakhstan while it had a trade surplus with the other four countries. The trade level, however, is not very significant and largely driven by pharmaceuticals. The trade and cultural ties between India and some of these countries date back centuries.

Kabul fell in 1996 and the Taliban was in control. While Uzbekistan Airways had flights to India back then, Air Astana launched services to New Delhi in 2004. Turkmenistan Airlines started its Indian operations around 2000. Airlines from Kyrgyzstan and Tajikistan joined the party much later.

Airlines continued to overfly Afghanistan during the previous stint of the Taliban but times are different now. The renewed capability of the group, its air arm, and its weapons cache are some of the things that will dictate how airlines respond. 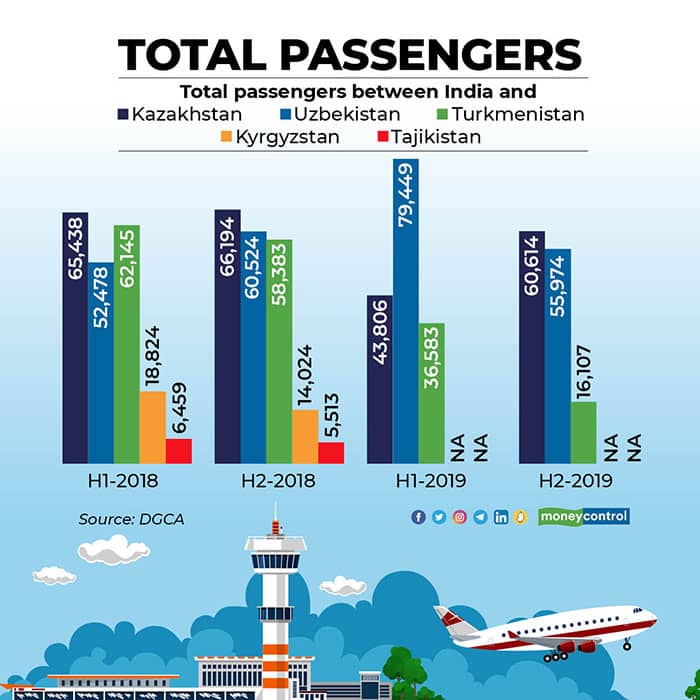 However, connectivity will face serious trouble if Afghanistan has to be avoided completely. Airlines scaled down operations to India when Pakistan’s airspace was closed. However, back then, the Afghan airspace was open. When Afghanistan’s airspace is not available, it forces airlines from the Central Asian republics to take to a longer route.

The window of opportunity

United Airlines has been operating flights to India with a routing that is remarkably different from Air India. The air route runs from Tajikistan’s airspace to Pakistan, overflying Afghanistan for a very short duration.

A recent NOTAM (notice to airmen) from the United States allows the use of air route P500-G500 for transiting overflights. This air route is from Tajikistan to Pakistan, flying for a very short period over the Wakhan Corridor in Afghanistan, which separates Tajikistan from Pakistan.

The new route saves two hours of flying time, based on data on the aircraft-tracking website Flightradar24.

Air India is said to have explored this route to operate its flights. If airlines, post-risk assessment, decide to use this route, it would become a very popular and busy route. However, the risk assessment will not be limited to just shoulder-fired missiles from the Taliban but the capability of its air arm, as well.

One can only hope that on the other side of the pandemic, when travel resumes, things in Afghanistan settle down and airlines are able to maintain their pre-pandemic connectivity.
Ameya Joshi runs the aviation analysis website Network Thoughts.
Tags: #Afghanistan #Air India #India Aviation #Taliban
first published: Aug 27, 2021 11:45 am