Wholesale inflation increases to 2.93% in February

Overall food inflation rate also edged closer to 5 percent. It was 4.28 in February this year compared to 2.34 percent in the previous month and 0.95 percent in the same of last year.

India’s wholesale inflation rate inched up to 2.93 percent in February, compared to 2.6 percent in January, driven by costlier vegetables that had seen prices drop sharply over the last few months as a bumper seasonal harvest flooded the mandis.

Pulses, the most common source of protein for millions of Indians, have also become costlier in mandis, the data showed, with wholesale inflation in pulses growing 10.88 percent in February, compared to 7.55 percent in January and (-) 24.51 percent in February last year.

Overall food inflation rate also edged closer to 5 percent. It was 4.28 in February this year compared to 2.34 percent in the previous month and 0.95 percent in the same of last year.

The WPI is a marker for price movements in bulk buys for traders and broadly mirrors trends in shop-end prices.

"The rise in vegetable prices are on expected lines. Going forward, food prices are expected to rise sequentially but there will not be a sharp rise. So the room for a rate cut by the Reserve Bank of India still remains," said Tushar Arora, senior economist, HDFC Bank.

"Oil prices too are likely to increase in the coming months, which will further exert an upward pressure on the prices. It will cross three percent in March and be in the 3-3.2 percent range," she said.

India’s agriculture sector is currently caught in a peculiar flux. Good harvests have helped keep bottle up the overall inflation levels but have also implied that farmers’ income have remained flat or not growing at rapid clip, as wholesale prices serves as a gauge to measure the prices that farmers are getting for their produce..

A bumper winter-sown crop, that had flooded mandis, had resulted in a price crash. Without many buyers, the glut had forced farmers to dump products at throwaway prices to clear up a piling mount of vegetables.

Rural distress caused by falling or stagnant farm incomes have snowballed into a major political issues ahead of the Lok Sabha elections to be held in April-May.  The Opposition has charged the government of failing to protect farmers’ interests by not ensuring a rise in their incomes.

Protesting farmers across many states have been emblematic of the structural problems afflicting India’s agriculture sector, with farmers saying their incomes have risen barely enough to cover to rising input costs such as fertilisers and seeds.

Several states including Madhya Pradesh, Uttar Pradesh and Punjab have waived off bank loans for farmers to help them deal with the immediate income crisis.

The Centre, in its Interim Budget last month, announced a new scheme to transfer Rs 6000 a year directly to small and marginal farmers’ bank accounts. The first tranche of this transfer is currently taking place.

An estimated 120 million farmers owing about 2 hectares of land will be eligible for this scheme that will cost the Centre Rs 75,000 crore a year.

Prices of fuel and power, which together have a weightage of 13.15 percent in WPI, grew to 2.23 percent in February, as against 1.85 percent in January. 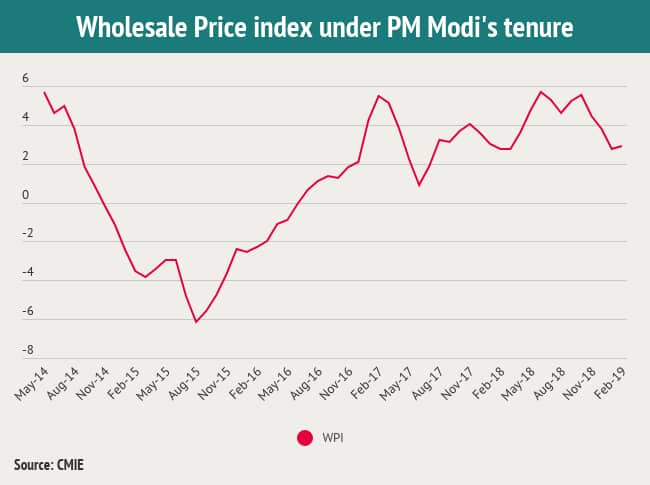