UPCOMING EVENT:Know how Global Investing can be spread beyond the US markets by joining an engaging webinar on November 30, 11:30 a.m.
you are here: HomeNewsBusinessEconomy

The timing of the announcement of a deep cut in interest rates on small savings schemes could not have been more inappropriate for the Bharatiya Janata Party (BJP) given that it was engaged in a high stakes battle to gain control of the West Bengal Assembly. The rate cut announcement was made late evening on March 31, which incidentally was the eve of the second phase of elections in West Bengal and Assam. It was withdrawn early Thursday morning, ahead of polling in key constituencies such as Nandigram in West Bengal where the incumbent chief minister Mamata Banerjee is contesting against Suvendhu Adhikari, her former aide and now a BJP candidate.

The rate cut could have proved damaging for the BJP’s campaign in West Bengal. After all, people from West Bengal are among the top contributors to the small savings schemes run through post offices and banks. It might have had repercussions in other states too, such as Tamil Nadu where the BJP is looking to strengthen its presence. Tamil Nadu is another significant contributor to the small savings schemes.

What the data show

Latest state-level data for contributions to the small savings schemes are not available but the data for 2017-18 published by the National Savings Institute—the latest available data—shows that contributions from savers in West Bengal accounted for 13.2% of the net collections of Rs 1,58,180.28 crore in all small savings schemes of post offices and banks at the end of 2017-18. Savers in Maharashtra were the largest contributors to these schemes, accounting for 15.2%.

But West Bengal comes on top when gross collections in the small savings schemes were considered, accounting for 15.1% of the contributions, while Maharashtra was at the third position after Uttar Pradesh.  Withdrawals from small savings schemes were much higher in West Bengal and that’s why its share in the net collections falls behind Maharashtra.

The 50-110 basis points (bps) cuts in interest rates announced on March 31 could have also damaged the BJP’s campaign in Assam where it is seeking to retain control and in Tamil Nadu where it hopes to increase its presence in the Assembly in alliance with the AIADMK. Tamil Nadu’s contribution to the national savings schemes was 4.8% in the gross collections and 6.6% of the net collections in 2017-18. The state ranks fifth after Delhi and Uttar Pradesh in the net contribution to small savings schemes of post offices and banks. 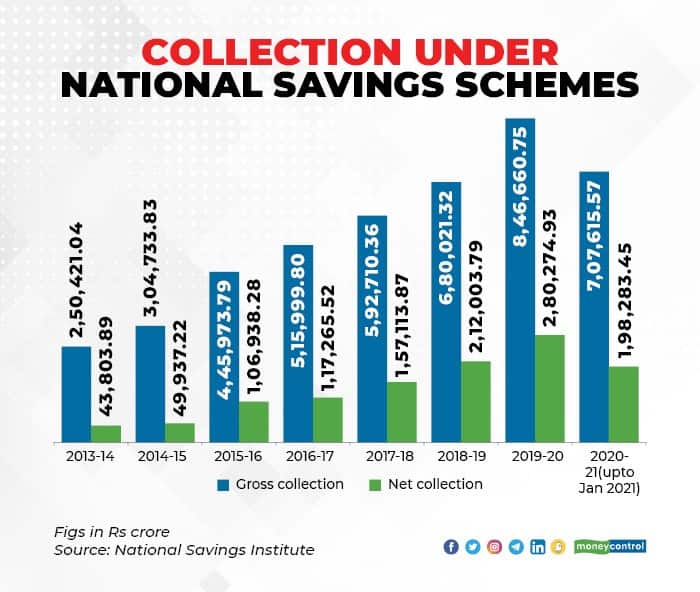 One basis point is one hundredth of a percentage point.

Kerala and Assam account for a much smaller share in the contribution to these savings schemes, as they have a smaller population as well as a smaller economy. Their industrial base is also small. Kerala’s contribution was 2.4% and Assam’s 1.3%.

Reduction or realignment of administered interest rates on small savings schemes had become a norm in recent years, given that inflation had been more benign and banks’ lending rates were also being lowered. The rates were last revised downwards at the beginning of 2020-21. The cuts were deeper and ranged between 80 bps and 140 bps. Interest rates on the public provident fund were cut by 80 bps then and on time deposits by 140 bps mostly. Before that, rates were lowered in July-September 2019, when the cut was mostly 10 bps.

Interest rates on small savings are calibrated from time to time to reduce the fiscal burden on the Centre as also to narrow distortions with other returns on other savings instruments. The rate cut of 2020-21 had badly hurt savers who keep their money in the post office schemes and pensioners. The interest rates on senior citizens schemes were cut by 120 bps, from 8.6% to 7.4%.

The further cut, as proposed in the now withdrawn order, would have reduced their earnings to 6.5%. Given that consumer price inflation rarely falls below 4%, senior citizens and pensioners barely manage to protect their principal. The Centre has retained the inflation target for the monetary policy framework at 2-6% for the next five year, and should inflation rise and stay above 4%, real earnings of this class of savers would get further affected.

For the moment, savers and pensioners can take solace that the rate cut has been withdrawn. However, the cut might be implemented from July 1 through an order by June end, as the Centre is keen to reduce its and the states borrowing costs. Both the Centre and states borrow from National Small Savings Fund, into which all small savings deposits are credited, to pay for various expenditures.
Tina Edwin is a senior financial journalist based in New Delhi.
Tags: #assembly elections 2021 #Finance Ministry #interest rates #Nirmala Sitharaman #Rate cut #small savings rate
first published: Apr 1, 2021 06:47 pm