PFCE is a realistic proxy to gauge household spending. The lockdown and the resultant fall in incomes meant that people were putting off purchases of aspirational items such as cars and televisions. A household's decision to buy a car or a consumer durable product such as television is not as much a function of current income as it is about expectations of future income.

"The sharp easing in the pace of contraction in private final consumption expenditure in Q2 FY2021 benefitted from the pent-up demand related to the lockdown quarter," Aditi Nayar, principal economist, ICRA, said.

Nayar said that the loss of momentum in government spending in July-September 2020-21, led to a 22 percent contraction in government final consumption expenditure.

"As a result, this component turned into the worst performer on the expenditure-side in Q2 FY2021 from being the best performer with a 16.4 percent expansion in Q1 FY2021," Nayar said. 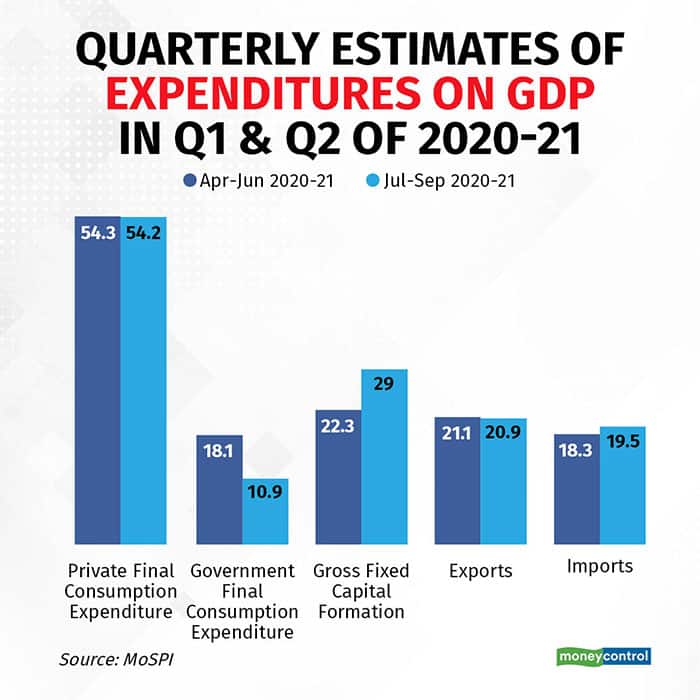 A majority of Indian cars and relatively costly consumer durables are bought through loans. Job losses and salary cuts across sectors have crippled a household's means to finance a purchase over a three- to five-year period.

India’s GDP contracted by 23.9 percent in the April-June quarter of the current fiscal year, which were primarily the months of a nationwide lockdown due to the COVID-19 pandemic.

Barring the agriculture sector, which grew 3.4 percent during the quarter, all other segments were in the red during the first quarter of 2020-21. Manufacturing, mining and construction contracted 39.3 percent, 23.3 percent and 50.3 percent respectively, while trade, transport, communication and related services contracted by 47 per cent.

Discretionary spending was hit hard with sales coming to a grinding halt for a few companies. Experts said all the consumer segments were hit hard due to the COVID-19 pandemic.

A pick-up in a number of high-frequency indicators, since the lockdown announced in March, have shown gradual signs of revival driven by festive demand. By September in fact, indicators like vehicle sales, real estate, manufacturing PMI, and railway freight earnings, had outstripped September 2019.

The IHS Markit Manufacturing PMI rose to 58.9 in October, the highest in more than a decade, compared to 56.8 in September, driven by robust sales. State Bank of India (SBI) revised their second-quarter GDP projection to a contraction of 10.7 percent from a contraction of 12.5 percent earlier, according to a research report from SBI Ecowrap.

The government was relying on some 60 high-frequency indicators to chart the recovery of the economy. A number of officials expect that the economy could be back in positive growth territory by the January-March quarter.