India's gross domestic product (GDP) grew 3.1 percent during January-March this year, as the COVID-19 induced disruptions appeared to have devastated the broader economy, pummelled by collapsing household spending and shuttered businesses that are battling to stay afloat.

It could get worse as restrictions and lockdowns continue to constrain people's movement, severely hurting economic activity. The nationwide lockdown kicked in from March 25, and its actual impact on the economy will show up in the subsequent months when businesses screeched to a standstill.

At 3.1 percent, India’s “real” or inflation-adjusted GDP growth was the lowest in 44 quarters, national income data released by the Central Statistics Office (CSO) on May 29, showed. Asia’s third-largest economy, which was the engine of global growth until recently, was staring at the possibility of slipping into a full-blown recession, the first time in 41 years.

An economy is often described to be in a recession when real GDP contracts in two successive quarters.

India’s GDP growth was revised downwards to 4.1 percent in October-December 2019-20. The numbers for the July-September quarter for the same year came at 4.4 percent and that for April-June quarter at 5.2 percent.

Slowdown signs were visible since last year, with GDP growing 4.7 percent in October-December 2019. The national income data have reinforced deceleration signs that were emanating from a slew of shop-end data, such as car and consumer goods sales, often seen as proxy indicators to gauge trends in household spending. 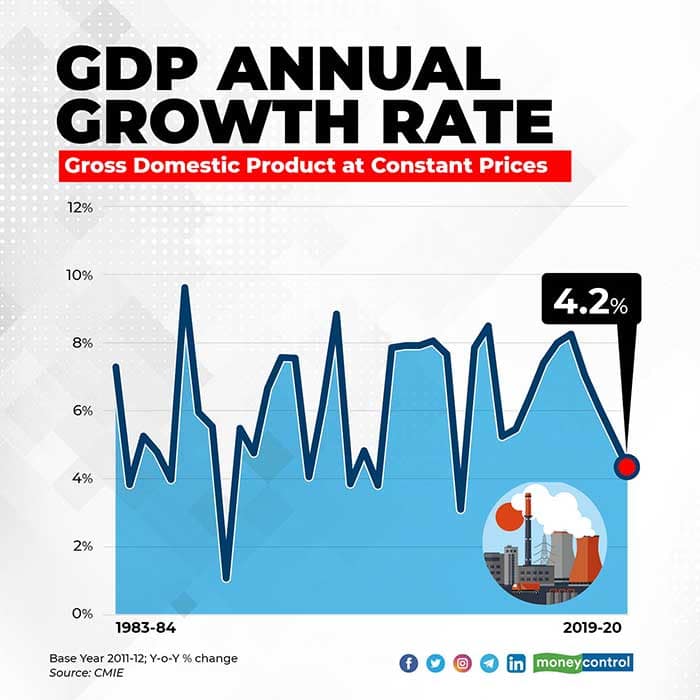 Fourth-quarter corporate results have also shown a slowdown in profit growth across sectors. People are buying fewer cars and domestic sales, production and export of automobiles reflected this deceleration. Similarly, growth in fast-moving consumer goods (FMCG) have also slowed down considerably in recent quarters, mirrored in slowing sales of consumer staples, such as biscuits, soaps, oil.

Gross value added (GVA), which is GDP minus taxes and is seen as a more realistic gauge to measure economic activity, grew 3 percent in January-March 2020, compared to 3.5 percent in the previous quarter and 5.6 percent in the fourth quarter of the previous year, implying that the deceleration is sharper than what the headline GDP growth numbers suggest.

Factory output measured by the index of industrial production (IIP) contracted 16 percent 2020. This shows declining momentum of both investment and consumption. Even core industries productions of steel, electricity, coal and cement are falling or have been stagnant in recent quarters.

The agriculture sector, which accounts for about 14 percent of GDP but supports more than half of India’s population, grew 5.9 percent during the quarter, compared to 1.6 percent in the same quarter last year and 3.6 percent in the previous quarter.

Economic activity in sectors such as retail trade, hotels and restaurants, and aviation, as well as in the unorganised sectors, have also been hit hard by the lockdown.

Construction activity indicators have also slackened, with contraction in cement production and slower growth in finished steel consumption in March.