In fact, ask RBI’s senior officials. In private, they have said that they had repeatedly asked the government not to switch off mobile telephones, messaging and the internet.

By now, there is no doubt that the Indian economy is sliding down a slippery slope. Recently, the IMF recently downgraded India’s economic growth to 4.8 percent for FY20. Chief economist of the IMF, Gita Gopinath bemoaned a decline in foreign investments. And India’s ranking as a democracy also fallen. 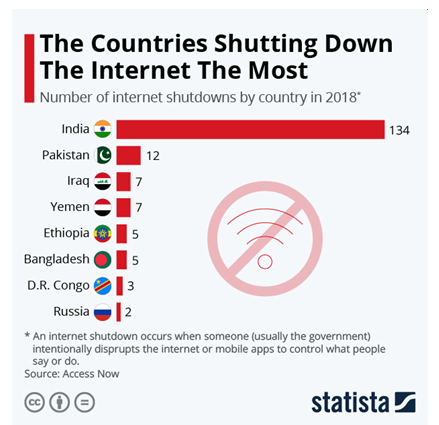 At the same time, there is evidence that India remained one of the biggest culprits when it comes to denying its citizens access to the Internet (see chart).

Close
Can one connect all these dots?
The answer is yes. The fastest road to growth remains an open society.  And the internet is a crucial means to achieve this – especially in an interconnected world that we have today.

In fact, ask RBI’s senior officials. In private, they have said that they had repeatedly asked the government not to switch off mobile telephones, messaging and the internet. They explained that there was a clear disconnect between the constant urging of financial markets to migrate to electronic payment systems, and the stoppage of these key means of communication and access.  They also pointed out that the two-level security system required access to OTPs. For this, mobile connectivity and e-mail services were crucially important.

This is where the finance ministry needs to step in.  Security is important.  But the need to continue business is equally important.  You cannot turn the clock back on ecommerce and electronic payment systems and logging into bank accounts. Unfortunately, if the finance ministry cannot make itself heard, there is little hope for reviving the economy.

There is another issue. The government wants international investments – and lots of it – to pour into India.  But it has not worked towards any form of reliable speedy dispute resolution of these disputes. Most disputes involve companies and the Indian government.  Even the Law Commission called India “a compulsive litigant”. As an ruling party document itself points out, “Today, India stands as a Respondent in more than fifteen cases involving investment treaties”  – the highest number of cases against a host state till date.

Of these, six are likely to have wide ramifications. They will definitely exert influence on global fund managers will then decide whether India can respect investors and investments. 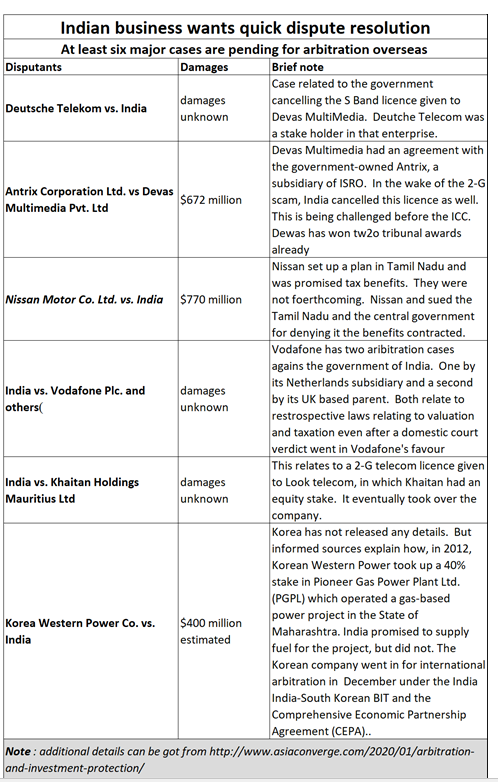 As the nodal agency in charge of investments, the finance ministry – along with the commerce, and law ministries – should assure global (and Indian) investors that arbitration avenues will not be blocked (which is what the government has tried to do since 2014). It needs to tell potential investors that Indian courts will move quickly to resolve disputes within a given time frame -- but not exceeding (say) one year.  To give investors the confidence that this assurance – like many others -- will also not be forgotten, the government needs to work out suitable guarantees. That will encourage investors to begin looking to India again.  The funds will create jobs, and economic wealth.  India’s resurgence can then be more assured.

The government can do all this.  All it needs is political will, and well drafted legal guarantees.  But for this the government needs to become more investor friendly.  It needs to make sure that rules of doing business are not changed after investments have poured in.  That is what players like Walmart and Amazon are upset about.  The move to change the rules of the game by introducing zero MDRs (merchant discount rates) for the Rupay card has not endeared India to potential investors. That is what telecom players too don’t like.

Changing the rules of any game midway is a worse form of retrospective taxation.  It destroys businesses in which promoters had invested heavily.  It disrupts their expansion plans.  And it makes the job market even more traumatic. India needs growth. For that it needs investments which in turn wants to ensure that there is a predictable business environment on the one hand, and speedy dispute resolutions on the other.

The finance minister should address such concerns in the forthcoming budget.  The budget needs to be one where fresh investments don’t look frighteningly foolhardy. It need to galvanise wealth generation in India once again.