Idea to focus more on ARPU, voice & data to be under pressure

Idea is now changing its strategy from voice rate led growth to average revenue per user (ARPU) led, Kapania said adding that “Idea is gearing to move to new method of
doing business.”

Kapania said voice and data rates will continue to remain under pressure.

Idea’s current debt stands at Rs 36,000 crore. Even after accounting for auction payment, net debt to EBITDA will be below 4X, he said.

Below is the verbatim transcript of Himanshu Kapania’s interview to Latha Venkatesh, Sonia Shenoy & Anuj Singhal.

Sonia: Quarter two has been a tough quarter for you and the industry as a whole. What were the key reasons?

A: Quarter two of all financial years is a weak quarter for telecom sector and with a larger proportion of rural customers, it is becoming weaker.

Competitively there is pressure on both voice rate as well as mobile data rate. Let me first start with voice, voice revenue has declined by 5.3 percent and besides the factor of contraction in minutes, the voice rates have declined by 3.4 percent on a sequential quarterly basis. However, some of it was a compensated by subscriber growth. We had a good subscriber growth on visitor location register (VLR) of 3.2 percent in this quarter. 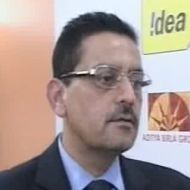 Moving on to broadband services and mobile data, mobile data is in high investment, low capacity utilisation mode and this quarter we have reported incremental addition of 5 million subscribers. We also reported good data volume growth of a 15.4 percent but this is on the back of significant drop of data rates. On a sequential quarterly basis, mobile data rate has fallen by 11 percent from 21.1 paisa per megabytes (MB) to 18.7 paisa per MB.

Latha: Let me stick with this rate war due to increase in competitive intensity, voice volumes have also declined for two straight quarters. When do you expect those volumes to recover considering that rates are falling?

A: There are two parts. In the previous two to three quarters Idea Cellular had changed its strategy from volume led strategy to balance between volume and rate. It resulted in end of quarter one.

We are very hopeful going forward. We should be back towards double digit voice volume growth with the season coming back.

Anuj: Will we see further pressure in the voice pricing and that is the big question? Which way will tariffs go?

A: You are right, in the last seven to eight years telecom industry has been measured by focusing on volume and rate ratios. With the new competition coming in we will have to start looking at the new ratios and we believe focus is moving from separately on rate and separately on volume to overall average revenue per user (ARPU). So, Idea Cellular is gearing itself to be able to move to a new method of doing business in telecom. So, there would be definitely pressure on voice rate, but we are very hopeful that this will be more than compensated both in number of subscriber additions - we want to go back to a double digit subscriber additions and that is why this quarter we are happy to report 3.2 million additions on a sequential quarter basis as well as we want to ensure that the overall ARPU of the customer continue to increase and we are able o hold the voice ARPU. So, the shift is now from a voice rate led strategy to an ARPU led strategy.

Sonia: You had done some value unlocking in the past but going ahead is there a plan to re-organise a telecom infrastructure and the tower business to unlock any value?

A: I once again repeat on overall basis, you are right; we have Rs 36,000 crore of debt. However, a large proportion of debt is government denominated debt. Most of the debt has a long gestation period and then we have to pay it over a period of 10 years. The company in the first half generated over Rs 4,400 crore of cash profits and it is fully able to finance its capex needs.

While there is no doubt, we have an additional opportunity to monetise our towers. We own 100 percent towers nearly 10,000 towers. However, there is no urgency to do the same.

Latha: There is urgency from another quarter from Telecom Regulatory Authority of India (TRAI), isn’t it? TRAI has recommend interconnect fine. Have you responded to this? Will you look at challenging this number?

A: We have also read on the website of TRAI, TRAI had sent us a show cause notice. We had responded and we would like to reiterate through this channel that we are meeting all quality of service norms. We have been steadily releasing points of interconnect (POI) and from the launch period till as of now we have almost expanded the total POI by 20 times to what it was at the time of launch.

A large number of points of interconnect are still in execution stage. We believe that this is not an issue that is relevant at this point of time. However, what TRAI has done is written to Department of Telecommunications (DoT) and we wait to see what actions there DoT does.