DGCA schedule restriction is no big deal for SpiceJet

The troubled airline has anyway been operating way below approved schedule. Only problem us SpiceJet will miss out on the peak Diwali rush while competitors will make a killing.

SpiceJet has been in the news for all the wrong reasons. First came the news earlier this week that the airline was sending 80 pilots on Leave Without Pay (LWP). This was followed by an extension of the cap on schedule from the regulator DGCA (Directorate General of Civil Aviation). The restrictions were initially imposed on July 27, 2022 for a period of eight weeks and have now been extended until the end of Summer Schedule i.e. October 29, 2022.

The airline was quick to inform that there will not be any impact on its operations and that it was already operating below the 50% mark largely owing to the weak season. Data now released by the regulator shows that the airline operated way below its approved schedule in August (see Schedule Compliance By Airlines).

The airline has long had poor compliance with schedule adherence, operating 48.5% of approved flights in April and just 52% in May. May happened to have been the best month in terms of traffic after the restart of aviation operations in India that were stalled by Covid.

This indicates a meagre 36.9% adherence to approved schedule. The airline had the lowest schedule adherence amongst all carriers. TruJet, which was allocated 355 weekly slots, suspended operations even before the schedule could start. 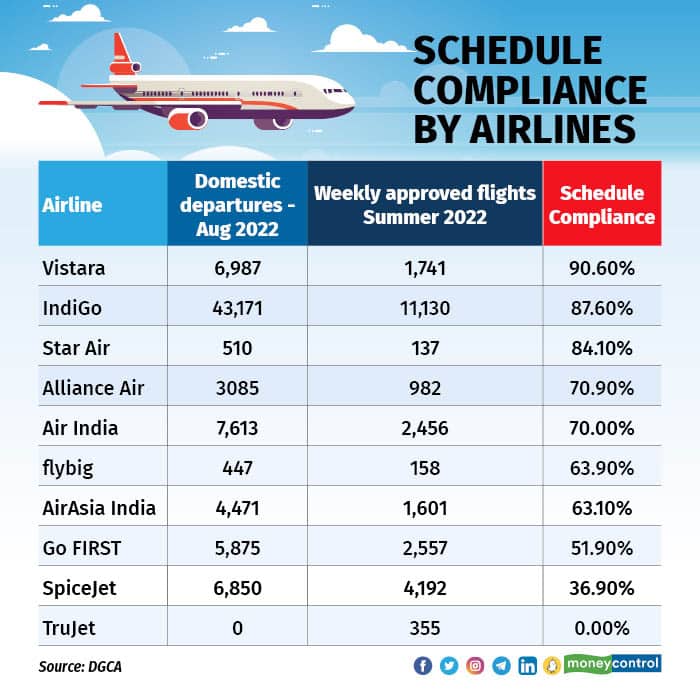 How are the others doing?

While the season indeed is lean as compared to the peak April - June quarter, Vistara operated over 90% of its approved schedule while IndiGo came close second with 87.6% compliance.

What next for SpiceJet?

The numbers tell us the tail of why the pilots are being sent on Leave Without Pay. The airline has had IDERA notices against it and seen its fleet go down. SpiceJet justified the same with information that it is in process of further reducing the 737 NGs in its fleet and expects to induct additional B737-8 MAX soon, 13 of which are already part of its fleet.

The silver lining for the airline has been consistent high load factors. Even after the regulator asked the airline to cap its schedule citing safety related matters, passengers have not turned their back towards the airline. The extension order, though, acknowledges that the number of incidents have gone down. That definitely is a positive sign for the airline.

Airlines have all but finalised the winter schedule, which kick starts on October 30, 2022. The worry for the airline would be its unutilised slots being handed over to other carriers, especially a resurgent Air India and upcoming Akasa Air.

SpiceJet had to curtail its operations drastically in the last quarter of 2014 and first quarter of 2015, when it returned from a near death experience. It could get its pound of flesh after the fall of Jet Airways. But that growth turned out to be miscalculated due to the pandemic - which came as a surprise.

With a 50% cap, SpiceJet will miss out on the peak Diwali rush where airlines are likely to make a good amount of money going by the current fares in the market. The MAX inductions will help the airline get over the fleet quality issues and also help on improved fuel metrics.

However, with such a poor schedule compliance in the market, the airline is reducing its own chances of adding revenue to its coffers. Not only does it have to sustain, it has to make enough money to help get over its negative net worth and get over the mountain of debt!
Ameya Joshi runs the aviation analysis website Network Thoughts.
Tags: #Akasa Air #DGCA #IndiGo #SpiceJet #SpiceJet aircraft #Vistara airline
first published: Sep 22, 2022 09:41 am