Order pick-up a year away despite recent reforms: Thermax

Even as the central government has taken various steps such as passing an ordinance to simplify land acquisition for infrastructure projects, a meaningful pick-up in order flows, such as in the power sector, is at least a year away, believes engineering firm Thermax.

Even as the central government has taken various steps such as passing an ordinance to simplify land acquisition for infrastructure projects, a meaningful pick-up in order flows, such as in the power sector, is at least a year away, believes engineering firm Thermax.

In an interview with CNBC-TV18, managing director MS Unnikrishnan said that key government infrastructure projects such as the Delhi Mumbai Industrial Corridor and Dedicated Freight Corridor were struggling with land issues.

Speaking about the company’s joint venture with Babcock-Wilcox, Unnikrishnan said it would remained strained going forward and added he expects breakeven only five years from now.

Below is the transcript of MS Unnikrishnan's interview with Anuj Singhal and Ekta Batra on CNBC-TV18. 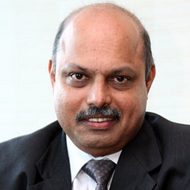 Ekta: Since the last time we spoke, there have been many announcements on coal block auctions, GST, ordinance on land acquisition etc, do you think that the recent announcements are enough to spur investments in capex or will the ordinance status of these acts put at risk an overall industry sentiment according to you?

A: These are moves in the right direction. It is picky that the government has to resort to an ordinance route to pass very ordinary policy changes that is the state of the politics in the country.

However, I would certainly respect the government -- the finance minister and the prime minister for having taken the bold step to move through an ordinance this changes, which they know fully well that they will not be able to pass through an independent session of Rajya Sabha, they have to have a combined session of the parliament called to get this through in the next six months period of time.

So these are not only bold moves, the way the move is taken is even bolder. Will that spur investment? My suggestion is these are indicators and pointers towards the revival because there are various other factors, which you will have to be sitting in when the investment cycle is going to be restarting but I would say these are in the right direction.

Anuj: In the land ordinance, we saw a lot of thrust by the government on industrial corridors and large special projects. Do you think news on order inflows especially for dedicated freight corridor will pick up any kind of momentum?

A: Not in the immediate future because by the time the notification is put into practice and when government or the agencies are able to procure land, it is going to be taking time. The notification, the moment it comes in then only people can start utilising the new low and this is fairly restrictive also in nature.

It is only for public purposes, PPAs, UMPPs and industrial corridors, these are the areas where this is going to be coming into effect immediately and I would believe that Delhi-Mumbai International Corridor (DMIC), which is already even financially closed was struggling for land acquisition in some of the areas and I am sure should give a fillip for it but for that to translate into ordering of equipments and companies, it would be a long way ahead. There are no UMPPs currently under consideration at bidding level.

So it will only help in the medium-term to long-term. However, for state-owned power plants this being either public interest or maybe public private partnership would certainly have a positive impact given but the timeframe for that also would be couple of quarters before people would have acquired land. But avoidance of the social impact angle and couple of notifications are absolutely positive in nature.

Ekta: We understand that the capital goods industry will also face a rollback in excise duty concession starting today. Given the over capacity in the system, do you think there will be any impact, does life change anyway for Thermax?

A: For the capital good sector even after the reduction of excise duty by a few percentages, we have not seen an increase in ordering because nobody would buy a capital equipment just because the price is lower, you can afford it cheaper, they would go only when there is a demand for it. So you have to understand the way this cycle performs for this.

Capacity utilisation of existing capacity when it reaches a critical level, like 80-85 percent or sometimes even more than 90 percentage, many companies in the sectors of cement, steel, power, oil and gas, fertiliser, sugar, these are the areas where the existing producers and manufacturers will start getting panicky when their capacity utilisation hits more than 90 percentage because even if they place an order for a new equipment or a new plant today, by the time it fructifies, it would be at least three-four years down the line. So they start placing the orders.

The capacity utilisation in the cement industry is hovering around 65-70 percent. Steel industry varies between 60 percent and 65 percent and in some smaller companies it may be 75 percent because of which, there is no necessity for anybody to be placing an order for a new capacity creation immediately.

So we need to be waiting for the consumption pattern to be increasing in the country, which I am expecting things should be changing because wholesale price index (WPI) and consumer price index (CPI) are very stable now. Inflation is under control, so the money available at the hands of the consumer has gone up. With that the consumption should start increasing, once the consumption increases to this critical level which I mentioned about, there will be ordering out for new capacities.

So what are the timeframe that we are looking forward to people like us are going to be looking forward to. If you were to be honest, nothing is going to change in ordering related to capital goods for a year atleast and you would see a spurt of that happening in selected sectors maybe in the next year i.e. FY17 not FY15-FY16. That is a realistic outlook.

Anuj: How have order inflows panned out in Q3 because we haven’t seen too many announcements in the exchanges this quarter?

A: Being the last day of the quarter and I am in a silent period, I cannot be giving you numbers, there were no major order finalisation which has happened in the country for larger projects, that much I can tell you. Nor did we see too much of changes happening in the international market also. So let us talk about our numbers specifically of the company when I am in a position to do it maybe a month down the line after the board meeting.

Ekta: There has also been a slight disappointment on the performance of your subsidiaries, Q2 also saw around 27 percent write-off in few investments and the overall turnaround efforts have been so far unsuccessful, what is the outlook on the subsidiaries for this year?

A: Of the investment made by Thermax group, the largish one is the joint venture with Babcock & Wilcox where we own 51 percent and the total investment is to the tune of around Rs 800-850 crore, it has also got a debt of approximately Rs 400-450 crore.

That is the one which is going to be taking a longer period of time because that is going to be totally dependent upon the larger supercritical power plant construction in the country.

I do not expect a major ordering to restart in the country for the next 24 months period for this industry. So I would expect our joint venture with Babcock & Wilcox is going to be in negative and in any case going to be under strain for two more years. We are willing to wait for it because whatever said and done, there are only three existing capacities in this country for making supercritical boilers.

The first one being Bharat Heavy Electricals Ltd (BHEL) and second one being Larsen and Toubro’s (L&T) joint venture with Mitsubishi Heavy Industries (MHI) and the third is Thermax’s joint venture with Babcock & Wilcox. So progressively as the power story is going to be unfolding, this JV will do well but for it to be reaching a level of profitability, one should be expecting at least 4-5 years time but the investment is for the period of 30-35 years so why should we be unduly worried. We should certainly be worried but not unduly worried about it. That is the main investment in joint venture or a subsidiary.

Other than that, the Chinese subsidiary is USD 11.5 million investment, which is nearing to a breakeven in the coming year. So I don’t think we are in anyway concerned or worried about it. Certainly we have put our German subsidiary which is a step down subsidiary of our company Danstroker, which was the loss-making entity right from the time we purchased the company four years back. We tried our level best to turn it around but with the economic difficulties and various other factors, that is not practical. So we put it into administration and certainly taken the losses, taken the hit on the balance sheet. That is the way it is and it has done us a positive move to ensure that the bid is stopped.

Anuj: One of your JVs has bid for the NTPC’s supercritical project, which if finalised could be the maiden superficial boiler order for Thermax, can you tell us the status of that order?

A: There was a hold on the project though the bidding process got completed for technical portion and the discussions were just going to be starting where there were certain reasons for which the buyer NTPC has put the project on hold but right now that is removed and they will start discussions and possibly reach the level of maybe a commercial bidding in the beginning of next financial year. That is our current understanding. There are a lot of uncertainties in some of the projects but this is the project which I think in our opinion should go through in the next year.