The JV was to tap the gas insulator substations market, which only a few companies in India manufacture, said TRIL Chairman Jitendra Mamtora.

Transformers and Rectifiers (India) Ltd has entered into a Joint venture agreement with Chinese company Jiangsu Jingke Smart Electric Company Limited (Jingke), for purpose of starting the business of manufacturing and marketing of GIS/HGIS/TGIS systems and products for 220kV and below, and distribution products of 40.5 kV and below in India.

TRIL will hold the 60 percent of the share of Joint venture and balance by Jingke.

The JV is meant to tap the gas insulator substations market, which only a few companies in India manufacture, said Chairman Jitendra Mamtora, adding that they would become one of the preferred suppliers going forward.

According to him, there is huge market for this and the JV would likely bring in around Rs 200 crore revenues in FY18

He said TRIL will be providing the infrastructure that is the plant facility for manufacturing and the critical components would come from China. Therefore, the initial investment is will be very less, said Mamtora.

Below is the verbatim transcript of Jitendra Mamtora’s interview to Latha Venkatesh & Reema Tendulkar on CNBC-TV18.

Reema: First if you could give us some details about this Joint venture (JV) what is the scope, the opportunity, the investment that it will entail?

A: This is a joint venture between us and the company in China called Jingke. They are one-off very few manufacturers of gas-insulated substations (GIS) and hybrid gas-insulated substations which only ABB does in India now. We are going to be one of the preferred supplier to the utilities and to the engineering, procurement, construction (EPC) contractors in the near future. Now as we have mentioned in this joint venture company Transformers & Rectifiers (T&R) will hold 60 percent shares and 40 percent share will be for Jingke.

Initially, we are not going to make much of the investment. We are going to utilise one of the facilities, which we have in the existing plant where we are doing now fabrication. So, the idea is to manufacture this gas-insulated substation, SF6, switchgear and hybrid switchgear gas-insulated substations with initially doing assembly and manufacturing the parts which are voluminous which increases the transportation cost and unnecessary duty which can be easily done here in our plant.

Only the critical component will be imported from China which will be used to manufacture this. We already have the testing facility; we already have the infrastructure required for manufacturing GIS, so nothing much of the investment will come in the beginning for at least a year.

Latha: If I understand you right what you are saying is that your equity participation will come by you giving the premises, the factory for the JV, am I right?

A: Partly yes, because we are going to lease out the factory building to the joint venture company. They will give also the equipment required for manufacturing gas-insulated substations, so the equipment will come from them. We will lease them the facility which we have. We will jointly participate in the tender where we qualify.

Latha: What is gas-insulated substations?

Reema: Could you tell us what is the opportunity which opens up because of this joint venture? What will be the orders that you are likely to bid for in FY17 the margins as well as any revenue projection if you have made for the JV?

A: We have done, we intend to do something like Rs 200 crore in the next financial year because this year also we will do because they have already participated in some of the tenders, so we are going to be part of it now.

Few four tenders they have participated and there are more tenders which are going to come. So, the initial work will be to get registered and get approval for the new plant where we are going to manufacture this. Once we get that once we qualify it will be getting the orders from there.

Latha: How long will this take before your production starts?

A: The production to start may be three to four months, not more than that.

Reema: You spoke about a Rs 200 crore revenue in FY18 that is for the JV which means Transformers & Rectifiers should get in additional Rs 120 crore?

Reema: The margins on these bids or the tenders that you will be putting what are they like?

A: You can’t predict the margins, it is all based on the market conditions mainly the supply and demand gap; it will totally depend on that. Now the margins are not bad, the margins are to the tune of about 18-20 percent earnings before interest, tax, depreciation and amortization (EBITDA) at the moment. What is going to happen; because there are 8 major players in India itself three of them are ABB, Siemens and Alstom and then Toshiba, Crompton Greaves, then TBEA and three more Chinese companies. We will be one additional company who will be doing this with the minimum of investment which will give us a good mileage. 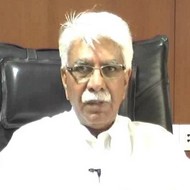 Jitendra Mamtora
CMD|Transformers & Rectifiers India
Get access to India's fastest growing financial subscriptions service Moneycontrol Pro for as little as Rs 599 for first year. Use the code "GETPRO". Moneycontrol Pro offers you all the information you need for wealth creation including actionable investment ideas, independent research and insights & analysis For more information, check out the Moneycontrol website or mobile app.