BK Batra, DMD of IDBI Bank says the timing seems right to monetize a part or its entire stake in CARE. He believes the bank can get between Rs 600 crore and Rs 700 crore for its entire shareholding.

The IDBI Bank board has approved the sale of part or whole of its shareholding in CARE. The bank holds 48.18 lakh share or 16.62 percent in CARE. It is in talks with PE players and financial institutions to sell the stake.

ChrysCapital, Baring PE Asia and Blackstone are likely to bid for the CARE stake. However, the formal bidding for the stake sale will begin by January 2015 and the process is likely to take place via a closed-bidding process. At current market price, IDBI Bank will get Rs 684 crore by selling its entire stake in CARE.

BK Batra, DMD of IDBI Bank says the timing seems right to monetize a part or its entire stake in CARE. He believes the bank can get between Rs 600 crore and Rs 700 crore for its entire shareholding.

He says IDBI Bank is only looking at CARE and NSE stake sales at the moment. 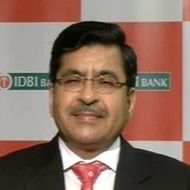 Below is the verbatim transcript of BK Batra's interview with Latha Venkatesh & Sonia Shenoy on CNBC-TV18.

Latha: What is the deal with CARE? Are you bringing down the stake, have you found buyers, how much are you likely to sell?

A: We are currently holding about 16.6 percent in CARE. We are one of the significant shareholders in CARE. Today the market is doing well, CARE is doing well so the timing seems to be right to monetise some off its shareholding that we have been having. That is the reason we have decided to go in for either a portion or the whole of the shareholding that we are having for sale.

A: We have not yet ruled out any process. We have only gone to the board and opted boards approval to go ahead with this divestment. We would be evaluating our options and then we will roll out the process for sale.

Sonia: How much are you looking to raise via this stake sale?

A: If we happen to sell the entire stake then going by the current price, the amount could be somewhere between Rs 600-700 crore. However, we have not yet taken a final call whether to divest a portion of what we are holding or the whole of it.

Latha: Are you planning to sell some stake in NSE as well?

A: You are right, NSE also we are looking if we can get the right price and the right buyer then we might sell again there either a portion or the whole of nearly five percent as we are holding in NSE.

A: It will certainly improve; the point is that right now it is where you mentioned. Our tier I is also slightly less than eight percent. However, with these stake sales our profits will go up and therefore capital adequacy of both tier I and overall should improve.

A: Right now perhaps no more. We do have a portfolio of strategic investments. However, right now we are looking at only these two - that is CARE and NSE.

Latha: What is the status of your loan to Ratnagiri Gas or Dabhol as the case may be? How much do they owe you and is it in danger of slipping into non-performing loan (NPL) this quarter or next?

A: Ratnagiri as a project is a very good project. As an asset it is a really good asset and even today it’s per megawatt cost is comparable to the current projects being set up. So, it can become a viable project provided you see the fuel that is gas that becomes available.

What we are expecting is the gas pooling arrangement that government is in the process of working out. If that gets finalised and the projects start getting gas so as to operate at least half of its capacity initially and later on as the capacity utilisation ramps up it can come back to life and become viable and service all its debtors well.

Latha: What is your exposure to the company?

Latha: Are you with the State Bank of India (SBI) chairman asking for the sale of the LNG plant?

A: We have suggested that as one of the option. The point is that LNG terminal is an additional asset that this company has. Initially the idea was to run it on imported gas but then that has not worked out so far. It can run on regassified liquefied natural gas (RNLG) also so that option still is there.

However, for the LNG plant to be completed it requires some further investment and only then it can be actually utilised to its full extent. It can then not only meet the requirements of this power project but maybe can sell some of its gas in the market as well. LNG terminal is an additional asset available with this plant and that makes this plant as much more valuable.

Latha: On these hopes lenders like yourselves, ICICI and SBI have been increasing your exposure to this plant. However, now it is almost 20 years or at least 16 years and this is still a white elephant for you all. What is the next step is it getting recognised as a bad loan in this or the next quarter? May be eventually to be restructured but is that event happening? What should we expect with respect to this exposure?

A: It is not that this plant has not operated well in the past. There was a stage it was operating at 100 percent capacity. It even pre paid a part of its loans to us so in fact our existing exposure is less than where we started. If you are talking about its present stage right now which is a standard and we are working together with all stakeholders to keep it standard and restart this plant and make it a viable one. That asset is still on and therefore my expectation is that it will continue to remain standard.

Sonia: You are one of the largest lenders to Jaiprakash (JP) Associates Group as well. What is the status as far as that loan is concerned? What is the exact exposure and how much of a hit would you have to take?

A: We are one of the large lenders to Jaiprakash Group also. The good thing about the group is they have quite good assets and the better thing about them is that they have been willing and have actually been selling some their valuable assets and realising those sale proceeds to pay down their debt. So, this group is doing right things, moving in the right direction trying to contain its leverage and not increasing its debt. It should be well on its way to recovery.

Sonia: What is the exact exposure that you have currently?

A: That I do not exactly remember but it is significant. It should be one of our largest exposures.

Latha: In CARE itself, is it true that SBI and Canara Bank are also wanting to sell their stake along with you and some private equity (PE) players have shown interest?

A: None of those things have been discussed but it is a fact that other shareholders have been gradually selling of their shareholding in the market. Right now the decision that we have taken is to sell our stake.

Sonia: So when will the formal bidding process begin and when do you expect to complete this stake sale process?

A: We are in the process of evaluating whether we should go for an Offer for Sale which is one route available or through open market. Preferably we may go for offer for sale because that is more expeditious route. We will get into this process within next few days.

Latha: You are not in conversation with Blackstone or ChrysCapital or Barings?

A: Right now we are not talking to anybody.