"I strongly feel that distribution will open up post the 2019 election and there will be immense opportunities that will come up," he says.

Praveer Sinha, the newly appointed managing director and CEO of Tata Power is convinced that the energy markets are in for a huge disruption.

In a free-wheeling interview with Moneycontrol, he said, “There is a huge disruption that is happening in the market and as a company if you are strong and still continue to innovate then you can capture the market. When I say disruption, it is taking place in green energy, with large power plants and large transmission lines too. There will be new models that will come up in distribution.

Based on our understanding about the sector and our exposure globally, we are best positioned to capture the market. We will definitely come up with unique solutions which would be different from those offered by our competitors and that will discriminate us from the rest. That means Tata Power will be poised to do many things that no one has done in the country.

I think micro-grids will play a very important role. We are doing a huge amount of research and development (R&D) in this space. This idea is very close to us and we will be playing a very important role in this not just in Indian context but in sub-Sahara Africa. There are large numbers of people who do not have access to energy. We will be the game-changer in the market as we go forward.” The statements do leave a great deal unspoken.  Sinha knows that he inherits a very large company which has its fingers in almost every segment of the power sector – transmission, distribution, generation and even renewables (see chart alongside).

It is a significant presence in sectors related to thermal, hydro (it was the first hydro player in India), wind and solar.  It is there in transmission and distribution as well. Today, the company has 7,661 MW of thermal power capacity installed and running.  It also has 447 MW of hydro electric power facilties, 932MW of wind power and 1,084 MW of solar power.

More importantly, the company has tremendous global exposure as well.  And this does not include projects that are in the pipeline and which could be huge.  One of them is the proposed coal mining project in Eastern Russia which also involved building a railway line and a port on the eastern coast of that country.

At the same time, Sinha has inherited a large power generating facility at Mundra which has been bleeding. 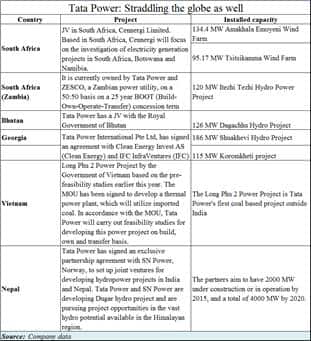 As he explains, “Yes, we are still making losses at Mundra. There is an issue about cost of power and it is mainly because coal prices going up. We have tried blending of coal in this plant and we have been quite successful. We tried using imported vs domestic coal in a ratio of 60:40 and out of the 40, 20 as high-calorific value (high CV) coal and 20 low-calorific value (low CV) coal. We are trying to extend this and see if we can do 50:50 and 15-20 per cent of high CV and 30-35 per cent of low CV coal. We are trying out a number of combinations that are possible because all these combinations have to be done keeping in mind the chemistry of the material. We have to be careful that the life of the plant and operationally capability of the plant do not get affected. We have to keep in mind other aspects like the environmental norms of the plant and this should be critically examined. We have seen good results and we intend to expand it further. In two years’ time, we hope to see an optimum mix on a sustained basis.”

But he also believes that there is some space for reworking some areas of operations.  While he does not spell out the details, one possibility could involve producing more power at Mundra to sell the surplus to new customers who are willing to pay higher prices, and thus allowing the company to neutralise its losses to that extent. Lowered costs on the one hand, and increased sale to customers willing to pay higher tariffs might do the trick.  Moreover, as Sinha puts it, “This plant has a commitment of 80 per cent supply to the five beneficiaries— Maharashtra, Gujarat, Rajasthan, Punjab and Haryana. We will not be diluting from the commitment and whatever we make extra, will help us become sustainable.”

And what about profits? Sinha merely says, “It is little early to give numbers. But in sense of direction, we would possibly be the largest player in the country in the years to come. We will become the largest player in distribution, and will take up any projects whenever there is an opportunity. We are in the distribution business in three cities—Mumbai, Delhi and Ajmer and in all these places we have different model. In Delhi, we are in a public-private partnership; in Mumbai, we are supplier and in Ajmer, we are a franchisee. Our understanding of all three businesses is very good. I do not think any other company in the country has that bandwidth. Also, I strongly feel that distribution will open up post the 2019 election and there will be immense opportunities that will come up.”

In many ways, Sinha’s views do point to the urgent need for any government to take stock of the huge liabilities the power sector has notched up in the past.  And that means opening up distribution to the private sector.  This is because of two problems that the government faces. First, the problem lies in supplying power to remote villages thus causing technical losses on the grid.  But a bigger problem is the incidence of theft and inefficient distribution.  This theft is often concealed by mis-declaring it as agricultural consumption.  As a recent CARE Ratings report points out, distribution losses for just 14 states have caused UDAY (Ujwal DISCOM Assurance Yojana)

That could explain why rural power distribution will soon become the focus of all future power management scenarios.  And that could also explain why Tata Power is also looking at this area very closely.

According to Sinha,” We will play a large role not just in urban India but in rural India as well. We are developing models for rural India in terms of technology and cost effectiveness. We are working on commercial and social areas to create economic activities in these areas. So that people can consume electricity and pay for it. We have got a good response but it will take two years before we have a model that we can scale up.”

In fact, the urgent need for the government to provide electrification to all households – both for political as well as social reasons – will remain a key concern for any government that comes to power post 2019.  But the government will have to do this with the assistance of private investment, because it may not have the resources to meet these targets on its own.

That could mean that the government will look more closely at using the decentralised cluster model approach, with the private sector taking up decentralised power generation and distribution.  To connect all these clusters together, and to balance out the power load effectively, the government will have no option but to begin modifying the power grid itself and seek to introduce more smart grid and micro-grid solutions. There is no denying there a major disruption in the power sector is just round the corner.

This is a view quite articulately put across by management gurus like Tony Seba.  With solar power becoming cheaper thanks to crashing solar panel prices and rapidly declining costs of storage battery units, the entire structure of the power sector could undergo a rapid change.

Solar power has the potential of making almost every household become both a power generator and a power consumer.  To harness this power during the hours when it is not used, and to allow a balancing out of power so that the need for peaking power stations gets subdued, the entire world will have to move towards micro-grids.  This is an area that Tata Power has been working on already.  Micro-grids will become crucial and almost ubiquitous when it comes to providing electricity to far flung regions.  Another term for such grids would be decentralised cluster power generation.

Such an approach would reduce transmission and distribution losses.  Moreover as the source of power (rooftop) is very close to the objects that consume power, the transfer of electricity can pose very few problems provided the network is handled and managed with care. It can become an employment multiplier as well.

There are good reasons to believe that India too will have to go this way, whether its power brokers (pun intended) like it or not.

To become more relevant to urban consumers, Tata Power has also embarked on what could be best described as power advisory services.  It has begun advising customers on how to manage their energy load in such a manner as to reduce energy bills.  This has already begun happening in Delhi where time of day (TOD) metering is in existence.

Sinha believes that it is only a matter of time before TOD metering gets introduced in Mumbai as well.  As he puts it, “TOD has to come to Mumbai and to all cities in India. In Delhi, we are already doing it for five years and TOD is a natural thing. TOD is evolving and I think regulators and others will look at it in times to come. It was started first for industrial and commercial houses in Delhi for 100 kv connections. Then it was introduced to 50 kva connections and then to 25 kva. It will come to households as well, especially those that have a high level of consumption. In case of individual consumers, there is a need to have smart metering done and that is the next stage where we play an important role in implementing and operating the smart metering infrastructure. Those are the areas we will be working on.”

That is where, just by shifting the time when you put on the washing machine in residences from peak hours to non-peak hours could make a big difference to energy bills for households.  Ditto for air-conditioners.  And Tata Power believes it has the experience and the expertise to play a major role in such advisory services. to Mumbai and to all cities.

And by when does Sinha expect this to make a big difference to Tata Power’s bottomline?  “It would be in two-three years,” he says.