DATA STORY: An iPhone costs hundreds of dollars but its raw material costs just over $1

Reports about the speculative price of the much-awaited iPhone 8 peg it to be around a whopping $1,000 - and that's precisely how much the raw materials for manufacturing about 1000 iPhone 6 handsets would cost.

Simply put, for making an iPhone 6's 16 GB version that weighs 129 grams, the total value of the raw materials that Apple pays the manufacturer is just $1.03.

The data, collated by Statista and sourced from 911 Metallurgist, further states that most of the raw materials used in the phone are far from precious as "38.5 percent of the phone is simply made up of aluminium and iron, worth $0.055 and $0.002, respectively".

The top four materials used in an iPhone 6 16 GB variant are Aluminium (31.1gm), Carbon (19.9gm), Oxygen(18.7gm) and Iron(18.6gm). Besides these, the phone uses Silicon, Copper, Cobalt, Hydrogen, Chrome and Nickel in varying quantities.

Other materials used in making the phone, as per a report are Gold, Gallium, Tin, Tungsten and other rare earth materials.

Though the data measures Apple's iPhone 6 that was released three years ago in 2014, it does give a perspective about how much value of the raw materials used in iPhone's later and upcoming models would be.

Especially since smartphone makers strive to keep the weight of a newer model similar or lesser than the older version.

What comprises the rest of the price tag?

Keeping the value of the raw materials aside, manufacturing, labour, testing, marketing, taxes, shipping and other logistics costs can be attributed to the price of the highly successful device. Apart from these, costs to develop and maintain Apple's proprietary and unmatched operating system, the Apple iOS, also feature in the price.

All of these costs and more are easily extracted by the company through the sales of the iPhone which contributes to a lion's share of Apple's revenue. 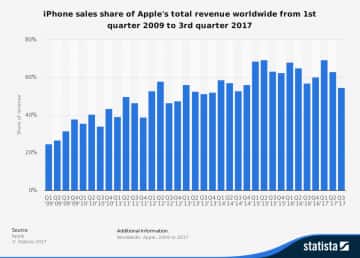 In the first quarter of 2017, Apple generated 69.4 percent of its revenue from iPhone sales.

Invite your friends and family to sign up for MC Tech 3, our daily newsletter that breaks down the biggest tech and startup stories of the day
Tags: #Apple #Apple iPhone #Business #Companies #Technology
first published: Aug 21, 2017 03:23 pm