Bata India reported a flat growth in standalone net profit at Rs 50.49 crore for the first quarter ended June 30. For the footwear maker, net sales were down 1.46 per cent during the quarter under review to Rs 674.26 crore as against Rs 684.29 crore of the corresponding quarter of the last fiscal.

Shedding light on the numbers, Rajiv Gopalakrishnan, Managing Director & President-South Asia of the company, said the sales in May had dropped because of delay in monsoon but June month saw better sales than expected.

He is also upbeat on the new winter collection, which will help boost margins. The company’s key focus is to grow in double digits and scale up margins going forward, said Gopalakrishnan.

He said the company has plans to add 20-30 stores this year and so far they have already added about 19 stores in the first quarter. It also closed around 20-30 stores that were not doing well, he said. 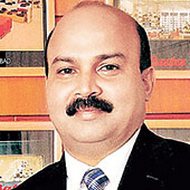 The current quarter margin came in at 12.2 percent and were below the historical average of 15-16 percent but Gopalakrishnan is confident that Bata will improve it.

Below is the verbatim transcript of Rajiv Gopalakrishnan’s interview to Mangalam Maloo & Reema Tendulkar.

Mangalam: Your revenue was down 1.5 percent this quarter. Could you please tell us what the same store sales growth was?

A: The same store growth was more or less flat this quarter. The reason being we had a pretty much delayed monsoon and monsoon is pretty big in Mumbai and in the entire western region. Therefore, that really made us to lose quite a lot in the western region and also the excessive heat wave which was in the month of May. So, May basically was bad but we bounced back in the month of June. June was better than our budget so, all put together the quarter was flat, but in terms of the profitability we are almost 7 percent up.

Reema: What is your guidance on the store addition in FY17? How many have you added in Q1 and considering the same store sales growth or the sales have been rather flat, would you look at cutting down your capex?

A: The number of stores we added in Q1 was around 19, but these stores were opened in the last one month or one-and-a-half month, so the benefits are going to come in the subsequent quarters. However, we have closed down a couple of stores. We have closed around 20-30 stores in the last quarter; the smaller stores, not viable, so those also losing the turnover in that particular quarter. But same store, mostly the monsoon which was the reason which we really had to go the same store growth was flat.

Moving forward in the next two-three quarters, I believe, we are going to have the benefit of the stores and we are planning to open another 20-30 stores by the end of this year which will also add into the kitty plus another 30 franchise stores are also on the cards. So, we are looking at the tier-III, tier-IV markets through the franchise operations as well as looking into the bigger cities with the large format stores.

Mangalam: Could you explain the flatness in your EBITDA margins, because the gross margins did expand by 200 basis points, still at about 12.2 percent, you are much below the historical 15-16 percent that Bata has seen before. So, what is your outlook on margins going ahead?

A: Margins is something which we really need to work back and we are focusing on that. The margins, why it went down is basically because we had cleared quite a lot of stock after the supply chain issues and stuff like that, there was a lot of stock piled up, so we have cleared. Basically the markdown has increased by 2 percent but going forward our inventory is much fresher. So, I believe the margins will bounce back and we will get better earnings before interest, taxes, depreciation and amortisation (EBITDA) numbers in terms of the percentage.

Reema: When you say the margins will bounce back from the current 12.2 percent, how much could they increase by?

A: I really cannot give any correct number on that, but I am sure that it is going to improve because the collection which we are launching in the autumn-winter which was supposed to launch in this month, this is also going to be extremely good products, particularly focused on women. This is with better margin, better product, better price and better styling. So, you will definitely see this is also going to add in the next two quarters in terms of our profitability.

Mangalam: You have always spoken about some premiumisation in your portfolio, your product portfolio as well and that is a visible partly in your operational numbers where the footwear EBIT has actually grown by 10 percent. In that case, could you tell us the share of sales coming in from the premium products as well as the ones coming in from low priced products?

A: When we say premium, it is looking at our internal brands like the Bata, the brand itself, we are premiumising on the top stores with complete leather shoe collection with leather outsoles and stuff like that. However, in terms of ladies, we are moving into more contemporary, more better price points and more fashionable shoes which are coming into the ladies contemporary range.

In addition, we have our own international brands like Hush Puppies and Naturalizer and Scholl, which again we are premiumising into the top stores in their separate collections. So, this constitutes to more or less around 30-40 percentage of our business. The volume is around another 30 percent which we cannot forget because we definitely cater to a lot of masses, our family stores which is almost 500 stores in the tier-II, tier-III markets are catered by the family customers and there we definitely have at the lower price points and the better value for money products. These are the ones which are around 20-30 percent if I may say the percentage of the lower price.

Reema: Coming back to your first answer where you said that June was better than what we had anticipated. Did that good momentum translate even into July? Give us a sense of how the full year is going to pan out in terms of revenue growth for the company?

A: I cannot give you any specific percentage as such, but what I said is in the month of May we had it pretty bad because of the monsoon failure and stuff like that. But June was very good, we did our budget and we believe in the next six months we should be doing a minimum our budgets or better than that.

Mangalam: Last three years, your sales grew at about 9.5 percent. Can we expect a double digit growth this year?

A: We are striving for that.

Reema: So, a double digit revenue growth and an improvement in margins?

A: Absolutely, this is our key focus.

Coronavirus spread at Nizamuddin: Here is what central, state govts have done so far
Loading...