In recent weeks, banks, including State Bank of India﻿, have come up with a flurry of offers such as concession for women borrowers, additional concession through digital channels and processing fee waivers and so on.

Home loan interest rates have fallen to 6.8 per cent to 7 per cent.

Cheaper interest rates, flurry of offers by banks and stamp duty cuts by states have contributed to a demand surge in the home loans market. Banks are finding these assets as attractive bets more than ever as against risky corporate loans in a faltering economy.

Of late, there has been a spectacular jump in demand for home loans, bankers and analysts said. Most banks have been increasing the share of mortgage loans as a percentage of retail book and overall loan book, they added.

Most banks have at least half of their retail book in home loans now. “Everybody wants to take a home loan and buy a home now,” said Sidhharth Purohit, analyst at SMC Global Securities.

According to RBI data, home loans have grown nearly 9 per cent on a year-on-year basis compared with overall loan growth of 6 per cent till November. Since then, the growth would have picked up even more, analysts say. Till November, banks had housing loan outstanding of Rs 13.8 lakh crore as against Rs 12.7 lakh crore in the year-ago period.

In recent weeks, banks, including State Bank of India, have come up with a flurry of offers such as concession for women borrowers, additional concession through digital channels and processing fee waivers and so on.

Private sector lender, ICICI Bank on November 11 said it had seen a significant pick-up in home loan disbursements in October both in terms of the number of customers and in terms of value. The bank's mortgage loan portfolio has crossed Rs 2 lakh crore, the bank said.

“We have seen a resurgence in demand for home buying,” said Anup Bagchi, Executive Director of ICICI Bank, in a conference call with reporters in November last year.

In December, properties worth Rs 34,000 crore were sold in Mumbai alone, many of them in the luxury segment, a Moneycontrol report said.

Sanjay Agarwal, Head of BFSI and NBFC at CARE ratings, said there is a clear uptrend in the home loan market. "With interest rates too low, affordability has gone up. Also, developers are facing pressure from their financiers to accommodate buyers," Agarwal said.

Along with this, stamp duty reductions and the lack of appetite on the part of lenders for corporate loans too have played a role in this spoke, he added.

Home loans are backed by solid collateral and are taken by a majority of people for own use. Hence the default rates are typically low. Banks want to cut down exposure to lumpy and high-risk corporate loans and shift to more retail loans.

Within retail loans, home loans offer a big comfort as default rates on housing loans, traditionally, are too low.
After bad loans from corporate loans escalated in the recent years, banks have significantly reduced lending to corporates and want to shift to safer retail loans.

“Home loans have multiple advantages for banks. It helps in the ALM management. We see most banks have been increasing the share of home loans to lower risks and build long-term relationship with clients,” Anand Dama, analyst at Emkay Global financials said.

Within retail loans, home loans offer a big comfort as default rates on housing loans, traditionally, are too low. Most banks have an average 50 per cent of their retail book in home loans and a quarter of the overall book in some cases. Secondly, banks lock home loans on a floating rate for 15-20 years which means if rates go up tomorrow, the return on such assets will go up as well.

Also, since home loans carry a 15-20 tenure, this help banks to build long-term association with the customer which in turn helps them cross-sell other products such as personal loans. 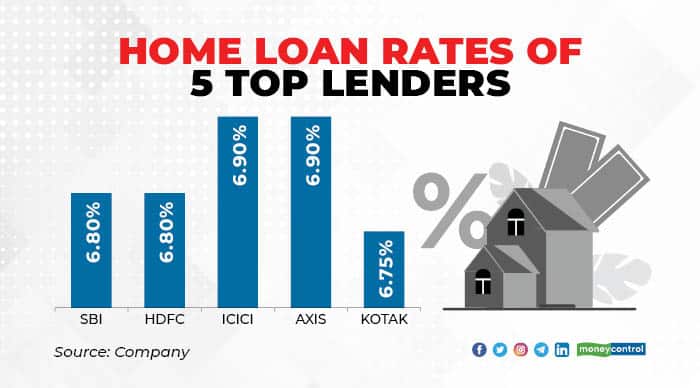 In search for lower rates

Besides fresh loans, tight competition in the housing loan market has caused significant number of borrowers to switch banks. “There is a rush to transfer existing loans to other banks as housing loan rates have fallen to record lowest levels,” said another banker with a large private bank who didn’t wish to be named.

Banks and financial institutions are benefiting from cheaper liquidity available in the market. Mortgage lenders are raising money at insanely low rates from money markets enabling them to go aggressive in the home loan market, industry experts said.

“Right now, we see the lowest rates ever offered on home loans in the market, which has contributed significantly to propel the demand,” Godrej Housing Finance CEO Manish Shah told Moneycontrol.

“A combination of factors,including stamp duty cuts and other incentives, has helped the demand. On the money supply side, strong players are able to raise money at cheap rates and want to pass on the benefit to customers,” said Shah.

States like Maharashtra have cut stamp duty in the recent months which has attracted lot of homebuyers. The Maharashtra government had in August temporarily reduced stamp duty from 5 percent to 2 percent until December 31, 2020, and to 3 percent from January 1, 2021, until March 31, 2021.

While rentals remain largely the same, loan EMIs have come down due to falling rates encouraging more to buy rather than rent
After reducing stamp duties in the state to boost residential sales, the Maharashtra government on January 6 approved the proposal to cut the premium on real estate projects by half till December 31, 2021. Developers availing of the scheme would have to pay full stamp duty and registration charges on behalf of homebuyers.

Another reason why more buyers look for home loans is the narrowing difference between rentals and EMIs. While rentals remain largely the same, loan EMIs have come down due to falling rates encouraging more to buy rather than rent, Shah said.

But how sustainable is the trend?

Purohit of SMC Global Securities said while the response in the home loan market has been good, one needs to wait and see how sustainable is this trend post the period of stamp duty cuts and near-term rush. “This demand may not stay forever,” Purohit said.

Purohit, however, agreed that banks have been focusing more on home loans in the recent months to rebalance their loan portfolio, lowering the portion of risky corporate loans.

“Given that there is an incentive now - in terms of stamp duty cut, affordability and lower rates - there is a rush to take home loans,” Purohit said, adding that among the factors, lower rates have played an important role.

Future is uncertain. However, for now, banks have a clear choice to make. A slowing economy and COVID-19 pandemic have resulted in high risk aversion among banks who fear further defaults from risky corporate exposure if an early economic recovery doesn't happen as expected. Home loans are safe bets.