A year after airlines came out of the 2020 lockdown, aviation looks wobbly again

Air traffic has fallen back close to the level seen a year ago, when airlines resumed operations after a two-month halt. Airlines now face much higher regulation and uncertainty about when their business will return to pre-COVID levels

Travel and tourism collage with airplane against blue sky with clouds (Source: ShutterStock)

Airlines were celebrating the end of doom and gloom exactly a year ago, when the first flight after the extended lockdown took off from New Delhi for Pune on May 15, 2020, ending the unprecedented two-month hiatus in India’s civil aviation.

A surprise tweet from the civil aviation minister triggered a scramble amongst airlines and airports to start preparations. Shares of airlines were the first to take off, rallying 10 percent after the announcement as the stock market chimed into the celebrations.

More than 500 flights ferried nearly 40,000 passengers on the very first day, contrary to gloomy forecasts that the euphoria would be short lived as only stranded people would fly on the first day.

The government expected the sector to bounce back to pre-COVID levels in a jiffy, but in reality, at its peak, air traffic reached 73.77 % of level before the pandemic.

Ironically, a year down the line, air traffic has again contracted to nearly the same level that was seen when airlines resumed operations last year.

Flights resumed gradually last year as states were not eager to allow them to operate. Mumbai capped the number to 25 departures, while GoAir did not resume operations until June 01, 2020! Had these constraints not been in place, it would have been a different story.

While the air traffic is down to around 10% of pre-COVID numbers, civil aviation in India is more regulated than ever. There is a floor price and ceiling price for airfares which has been revised a couple of times since last May to factor in the increase in input costs, primarily fuel. This has led to the shorter sectors having a floor price which is at times double of what was the pre-COVID regular fare.

Fare is not the only thing that is regulated. Even capacity is capped to 80% of pre-COVID levels. While initially the argument for capping capacity at 33% was to maintain social distancing - there hardly is any argument left with the capacity caps being in place only to protect carriers from going bankrupt in face of heavy competition. 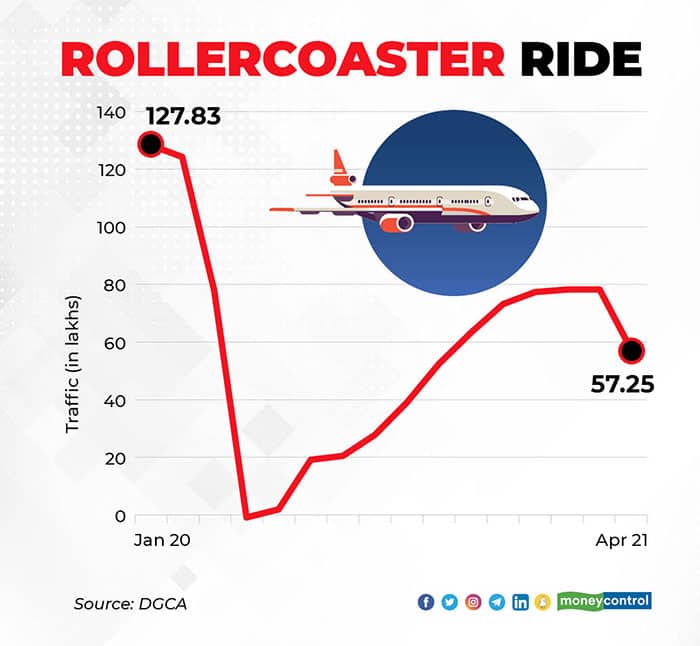 What has changed, and what hasn’t?

Pandemic had the potential to create a large-scale upheaval in the market. But be it globally or locally, more airlines go down during normal times than what have gone down during the pandemic. In India, every airline has survived so far and while the going could still be challenging - sustaining a year with meagre revenues is no mean feat! But the past year has seen the TATA group rake in more stake in AirAsia India - its partnership with Malaysia based AirAsia Bhd. The airline has been shrouded in controversy since its inception.

Surprisingly, no large-scale fleet cuts or repossessions have taken place. In fact, IndiGo has utilised this time to renew its fleet. While the overall fleet count has remained more or less same for the airline. The airline now has 121 A320neo as compared to 100 in April 2020 along with 40 A321neo as compared to 14 in April 2020! Likewise GoAir has accelerated the phase out of its A320ceo, replacing them with the A320neo.

AirAsia India became the last major airline in India to induct the fuel-efficient A320neo. IndiGo, GoAir, Air India and Vistara -- the other Airbus operators in the country -- already operated the A320neo. Spicejet, whose auditors doubted the airline’s ability to remain a going concern, ended up expanding its freighter fleet with a temporary addition on wet-lease of widebody aircraft from Hi-Fly. These A340 and A330 aircraft have been crisscrossing the world, ferrying essentials, cargo and medical supplies in the past few days.

When aviation came to a grinding halt, there were questions being raised about who will survive and who will not. While the future still remains foggy, all airlines have made it thus far with IndiGo recently taking a board approval to raise up to INR 3,000 crore as part of QIP exercise. On the other hand, GoAir has decided to explore listing on the bourses to raise funds. While IndiGo will use these funds to improve its war chest, the DRHP of GoAir lists how the money would be utilised, which includes paying off debts to oil companies.

Finances remain precarious for Spicejet and state-owned Air India - which is up for privatisation.

Aviation Turbine Fuel (ATF) comprises about 40% of total costs for airlines. Increasing fuel costs have been the nemesis of carriers in the past. Spicejet was on the brink in 2014, when fuel costs were skyrocketing, while Kingfisher and Jet Airways having faced similar issues around 2008-9.

Back to where we were?

While growth in the past has been incremental, the pandemic made the growth cyclical the world over. With every new wave, traffic and economy suffered and the same was seen in India during the second wave. As it subsides, airlines would be hoping for traffic numbers to pick up as quickly as the COVID numbers did and so does the vaccination. The opening up of economies in the West after vaccination is a glimmer of hope for revival.

Until then, the web of rules around requirements for travel along with shuttering of businesses, hotels and other commercial establishments because of the lockdowns, would mean that airlines struggle to fully utilisation of their fleet, which has a direct impact on revenue and profitability for the foreseeable future.
Ameya Joshi runs the aviation analysis website Network Thoughts.
Tags: #airlines #aviation #GoAir #India Aviation #IndiGo #SpiceJet #Vistara
first published: May 25, 2021 01:38 pm