A new pecking order among airlines at India’s busiest airport

Mumbai, the busiest single-runway airport in the world, has run out of slots. An analysis of the latest data on the airlines that gained and lost most at the airport.

Mumbai airport prides itself as the busiest single-runway airport in the world has run out of slots. It works in multiple peaks during the day, and like many other airports in the country, Mumbai’s runway capacity and apron capacity are not in sync. Picture: Shutter Stock

Be it getting back Jet Airways slots or adding capacity — the bone of contention has always been slots at Mumbai — the country’s second busiest airport, which serves the financial capital of India. It is not as if all other airports have slots aplenty… but other airports are expanding. Bengaluru, for example, will have both its runways operational at the end of this month. This will lead to the release of additional slots for airlines. Delhi is building its fourth runway. It already has two parallel runways in operation and with the expansion of Terminal 1, there will be more slots on offer.

Cut back to Mumbai. The airport that prides itself as the busiest single-runway airport in the world has run out of slots. It works in multiple peaks during the day, and like many other airports in the country, Mumbai’s runway capacity and apron capacity are not in sync. This means that the runway could handle more movement at night but there are hardly any bays that can accommodate widebody aircraft. With so many constraints, who would not want to have a slot in Mumbai?

No wonder then, that AirAsia India accepted red eye flights to Mumbai to get a foot in the door when it began operations. It got lucky when Jet Airways suspended operations. The last two years have been tumultuous, with 2019 leading to a scaleback in Jet Airways’ operations followed by suspension in March-April. Thereafter, 2020 being a pandemic year, saw air traffic coming to a halt in March-April.

My airport, My Rules

Maharashtra has been a Covid-19 hotspot, and when domestic aviation re-started, the State was one of the first to have restrictions in place. Mumbai, for example, allowed only 25 departures daily. Slowly, this increased, while rules like having a negative RT-PCR test result to enter the city by air continued for passengers arriving from certain States.

The Central government also started lifting restrictions in phases and from 33 percent capacity at the beginning, airlines were allowed to operate up to 80 percent of their pre-Covid capacity. In February 2020 — the last full month before operations were suspended, domestic aviation in India saw 3,136 daily departures. This translates into airlines now being allowed 2,509 daily departures, a number they have so far not operated.

In this backdrop and the demand for Jet Airways slots, it is interesting to note that airlines are willing to not operate the permissible capacity in Mumbai.

Who’s operating, and how much?

The airport saw 6,333 domestic departures in February 2021. This stands at 66.62 percent of last February. The clear winner in the process was AirAsia India, which exceeded its operations from last February and operated more flights this time around.

India’s domestic market leader IndiGo operated 75 percent of its flights, while Star Air maintained the same number of departures. Star Air and Trujet have a very small presence in Mumbai and this is exclusively for routes that are operated under the Regional Connectivity Scheme (RCS)-UDAN (Ude Desh ka Aam Nagrik) scheme.

Among major airlines, the highest cuts have been from Spicejet, which saw less than half of its flights operating. Ironic as it may seem, Spicejet had benefited the most from Jet Airways slots, which were redistributed based on the additional capacity being inducted by the airline operator. Spicejet is closely followed by GoAir, which operated just over half of its flights. State-owned Air India was in line with the average, operating 67.71 percent of its flights. 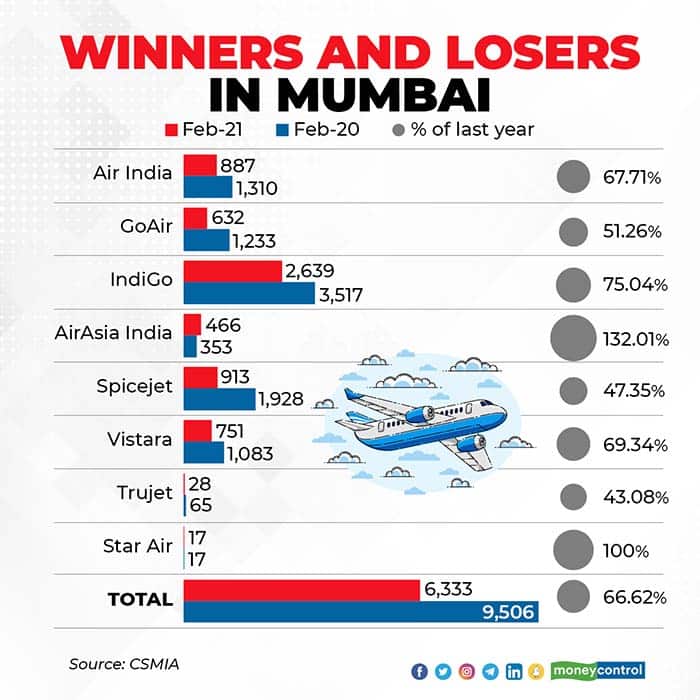 Mumbai was the only major airport where IndiGo was not the leader in terms of domestic capacity. This changed with the fall of Jet Airways. While IndiGo did not gain as much as Spicejet did, the airline was catapulted to the numero uno position. IndiGo operated 41.67 percent of all domestic flights from Mumbai in February 2021. This is still lower than its market share of over 50 percent, indicating the spread of airlines in Mumbai.

Next was Spicejet, with just 14.41 percent of total departures followed by Air India and Vistara at 14 percent and 11.85 percent, respectively. Business travel hasn’t picked up as yet but a lower and upper fare cap means that there is little differentiation in fares for low-cost carriers or full-service carriers and that was evident from how the load factors were stacked up across airlines in February.

With the extension of capacity limits as well as fare bands, the gloves won’t come off in April either and it will be interesting to see who gets the maximum out of Mumbai, within the regulations, to claim historicity for the future.
Ameya Joshi runs the aviation analysis website Network Thoughts.
TAGS: #RCS #UDAN
first published: Mar 23, 2021 11:35 am