Review | The Hyundai Veloster N. is a firecracker wrapped in a rocket

It is unlikely that the Veloster N. will come to India, but one hopes Hyundai will consider bringing cheaper, full-fat versions of its N-line performance cars to the country.

The Hyundai Veloster N. exterior is a mix of angular creases and round edges that come together really well.

Did you know that Hyundai makes one of the quickest, best looking, best sounding and most entertaining cars on the planet currently?

Yes, the very same Hyundai that is known for making practical, economical and value-for-money family cars all over the world.

But first, some context: Hyundai India has announced that from August 24, 2021, it will unveil its N Line range in India - starting with the i20 N Line.

Now, the N department is tasked with taking Hyundai’s regular models and hitting them with a large performance stick, in the same way that the M department at BMW and AMG at Mercedes-Benz function.

Thus, Hyundai offers a plain-vanilla Elantra in the USA, for example, as well as the Elantra N that is far more powerful, loud and agile.

The N-Line range is aimed at those who want some extra pizazz without breaking the bank (or putting their driving licence at risk). Yet, the N Line models that are coming to India soon will have cosmetic modifications and minor exhaust and suspension tweaks only.

While I’m all for extra sporty versions of standard models, I eagerly await the launch of the full-blown N cars here, because they’re simply fantastic.

This brings me back to the car I was referring to at the beginning of this article – the Hyundai Veloster N. The Veloster is already an eye-catching and fun car, and the N version – well, it’s a firecracker wrapped in a rocket, not to put too fine a point on it.

It’s so good that it beat some of the world’s best sports and performance cars in several comparison tests carried out by American automotive publications, which is an astounding achievement.

The Veloster will likely never make it to India (it’s too niche, and will be way too expensive), but I was lucky enough to drive one on a pre-COVID visit to the USA; it was so much fun that I remember every moment of it even now.

For starters, it looks absolutely wild, and it’s hard to believe it’s a Hyundai; I would posit that it’s the most striking looking hot hatch on the market right now.

The Veloster N's exterior is a mix of angular creases and round edges that come together really well, and make the car look like it’s snarling at you while standing still.

The 19-inch wheels fill out the arches completely, and the air vents and rear spoiler round off the quirky design.

The best shade of paint for it is the Performance Blue, in my opinion, and the red accents all over the body look amazing.

The cabin keeps it pretty simple, and isn’t at par with cars like the Mini Cooper JCW – some of the materials used feel a bit downmarket by comparison, but then again, the competition is way more expensive.

There’s a touchscreen on the dashboard with a bunch of buttons, and the steering wheel gets basic controls along with two blue buttons, to switch between the standard drive and race modes. The touchscreen infotainment gives you Apple CarPlay and Android Auto, along with navigation and satellite radio.

The instruments are (refreshingly) analogue, and a small screen between them gives you information about fuel economy, average speed, distance to empty and so forth.

The Veloster N’s best tech feature is the performance readout section in the infotainment system, which lets you minutely customise things like the steering weight, suspension setup, traction control, etc., in order to find the best possible combination for your tastes.

The sports bucket seats look a bit severe, but they’re comfortable and grip you like glue while you’re driving, which is the whole idea. You’re best off in the front of this car, because it’s where the action is and also because of a design quirk – it only has three doors. There’s one massive door on the driver’s side, a smaller one for the front passenger and an even smaller one for the rear passenger, which makes getting in and out a bit of a pain; once inside, the rear seat isn’t exactly awash with comfort and space, either. Still, you won’t really mind any of this, because once you get in the hot seat and floor the accelerator...

... you’ll be laughing all the way to wherever you happen to be heading. Powering this car is a turbocharged 2-litre petrol engine with 275 wholesome bhp and 352 Nm of torque, and when both of them combine at their peak, the Veloster N transforms into a raucous heat-seeking missile, with a barking soundtrack to match.

The turbos take a fraction of a second to spool up, but when they do, the 4-cylinder engine delivers a knockout punch – and then keeps on hammering away. A 0-100 kmph run takes just under 6 seconds, and the car feels like it’ll keep accelerating as long as there’s enough road to allow it to do so.

For extra hilarity, there’s a button marked ‘NGS’ on the steering wheel, which stands for ‘N Grin Shift’ (no, really); pushing that button bumps up the torque to 377 Nm for 20 seconds, giving you even more of a kick in the pants.

The gearbox is a good old 6-speed manual (purists, rejoice), which is very sharp and a joy to operate as you blast through the rev range. I hear that the newest Veloster N also gets an 8-speed dual-clutch automatic transmission that is phenomenally good, but the manual gearbox is right up there as well. 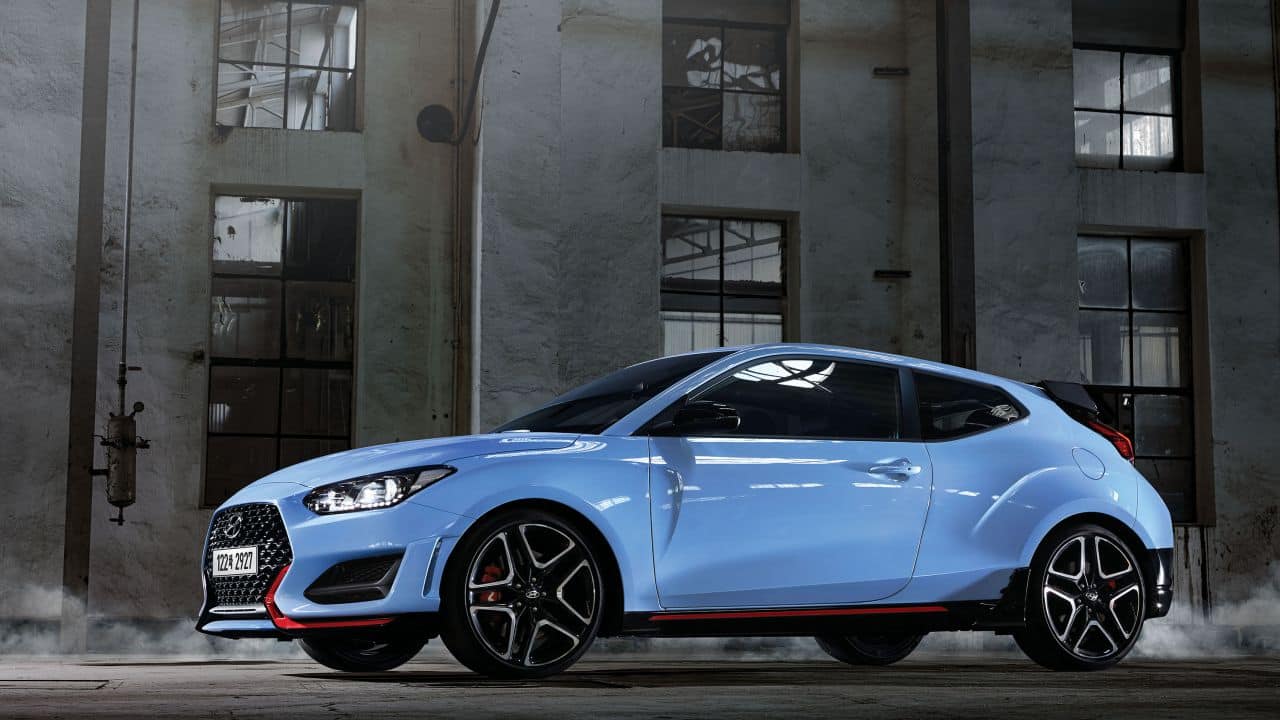 The big 19-inch wheels on the Hyundai Veloster N. don’t make for the plushest of rides.

In the handling department, the Veloster N. is virtually flawless. It feels like it’s glued to the road – to overuse a cliche – no matter what you’re attempting to do in it, whether it’s a straight line acceleration or hurling it around a series of tight corners.

At no point does it feel like it’ll surprise you with something it shouldn’t do, and the steering wheel and brakes are so rich with feedback, so precise, they’re almost telepathic.

Of course, those big 19-inch wheels don’t make for the plushest of rides (the Veloster N can thud through road undulations), but when you’re having this much fun, what’s a filling or two shaken loose?

Safety tech isn’t lacking in this car, either. Other than the usual set of airbags, ABS, traction control and so on, you get very useful lane-centering and lane-assist features, which are very smooth and keep the car where it should be in an unobtrusive way. And if you’re asking about fuel efficiency, this car isn’t for you (it will return about 9 km per litre, nevertheless).

For the equivalent of around Rs 23 lakh, the Veloster N. is hands down one of the most bang-for-buck cars made today – it will (and has) run rings around cars three times that price.

As I mentioned earlier, it’s highly unlikely to come to India (a Hyundai hatchback for roughly Rs 50 lakh will be an almost impossible sell), but I do hope that Hyundai thinks about launching some cheaper full-fat N models. You can’t really put a price on sheer driving pleasure, after all.
Rana Chaudhury is a writer passionate about automobiles.
Tags: #Car review #Hyundai India #Hyundai N Line #Hyundai Veloster N #i20 N Line #performance #Performance Cars
first published: Aug 16, 2021 03:56 pm