The impacts of crises are never gender-neutral and COVID-19 is no exception as women and girls are especially hurt by the resulting economic and social fallout.

As coronavirus continues its rampage globally, it has not affected men and women alike. While men reportedly have a higher fatality rate, women and girls are especially hurt by the resulting economic and social fallout. As per a UN Women report, the impacts of coronavirus on women and girls is far more than their counterparts.

The report titled 'From Insights to Action: Gender Equality in the Wake of COVID-19' states even within the same gender, marginalized groups are more likely to die from COVID-19.

The report further states that more women on the front lines are affected by COVID-19 than men. "Recent data from Germany, Italy, Spain and the United States show confirmed COVID-19 cases among female health workers are two to three times higher than those observed among their male counterparts," it said, noting that globally, women make up 70 percent of the health and social care workforce and they are more likely to be front-line health workers.

In addition to physical health, the novel coronavirus pandemic has also gravely affected women's financial health. While men are more likely to see their working hours reduced (54% of men vs. 50% of women), more women have lost their jobs or businesses as a result of COVID-19 (25% of women vs. 21% of men).

Moreover, women are 19 percent more likely to lose their jobs in comparison to men, as per the UN report.

The pandemic has also widened the gender poverty gaps, especially for people aged 25 to 34. "In 2021, it is expected there will be 118 women in poverty for every 100 poor men globally, and this ratio could rise to 121 poor women for every 100 poor men by 2030," the report estimates, adding that while sub-Saharan Africa and South Asia will be the most impacted, significantly more women in South Asia will be affected.

According to a new analysis commissioned by UN Women and United Nations Development Programme (UNDP), by 2021 around 435 million women and girls will be living on less than $1.90 (approx Rs 139) a day — including 47 million pushed into poverty as a result of COVID-19. The outbreak of COVID-19 pandemic has also impacted the mental health of women due to the significant increase in unpaid care and domestic work.

Cross-country data from UN Women’s rapid assessment surveys revealed that while both women and men reported a significant increase in domestic work during the pandemic, women continue to do the lion’s share of this work, which affected their ability to engage in paid work.

"In Asia and the Pacific region, 66 percent of women reported mental health effects as a result of COVID-19, compared to 58 percent of men," the report states. 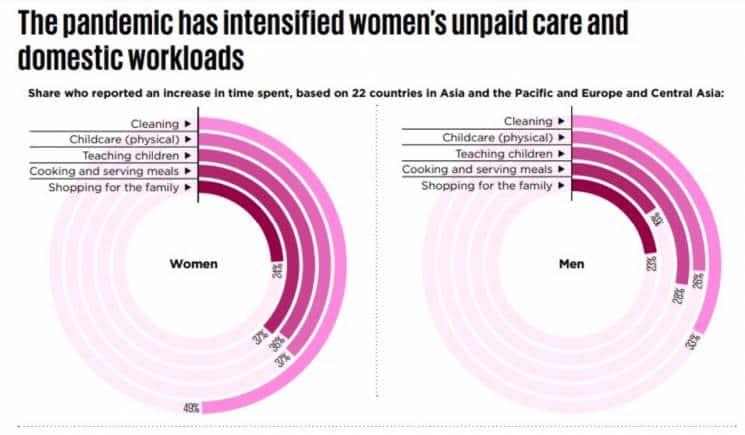 While the violence against women and girls has spiked multi folds since the outbreak of COVID-19, the reporting of the same has dropped.

In countries such as Argentina, Cyprus, France and Singapore, reports of domestic violence and calls to abuse hotlines increased during the first weeks of the lockdown. In the United Kingdom, 16 women died at the hands of domestic abusers between 23 March and 12 April – nearly three times more than during the same period over the previous decade, the report states.

However, abuse reports and calls to hotlines are also decreasing as women are unable to leave home or access help online.

"Prior to the pandemic, less than 40 percent of survivors of these crimes sought help of any sort and less than 10 percent of them reported these crimes to police. With lockdowns, reporting is expected to drop further," the report states.

In India, report cases of domestic violence increased during the coronavirus lockdown period. National Commission of Women Chairperson Rekha Sharma had said that domestic violence complaints were increasing by the day since the nationwide lockdown was imposed on March 25. The NCW also launched a WhatsApp number - 7217735372 - for women facing domestic violence.

The report states that without coordinated action, gender equality gains achieved over the past 25 years is likely to be lost. It called on countries to improve gender data collection and expand research on the gendered impacts of COVID-19, particularly on those most marginalised.

'My father will be king, better watch out,' Prince George warns classmate