Economists expect the UK central bank to lift its benchmark lending rate a half percentage point to 2.25% and confirm plans to sell more of the £895 billion of bonds acquired during the quantitative-easing program. Investors see a strong chance of a three-quarter-point increase.

The Bank of England on Thursday is set to raise interest rates and start selling assets built up during a decade-long stimulus program, a historic tightening of monetary policy designed to clamp down on inflation.

Economists expect the UK central bank to lift its benchmark lending rate a half percentage point to 2.25% and confirm plans to sell more of the £895 billion of bonds acquired during the quantitative-easing program. Investors see a strong chance of a three-quarter-point increase. Officials led by Governor Andrew Bailey have said they’ll act “forcefully” to prevent inflation from seeping into expectations that wages prices will keep rising. This month’s decision, due at 12 p.m. London time, also gives the government an opportunity to recalibrate the BOE’s emphasis.

Following are elements to watch for in the decision:

A half-point rate rise would repeat the scale of last month’s increase, which was the biggest in 27 years. Back-to-back hikes of that scale haven’t been seen since Black Wednesday 30 years ago, and those were reversed within the day.

A 75 basis-point increase next week would be the biggest since 1989, when inflation was climbing rapidly following a consumer boom.

A drop in the value of the pound and surging interest rates in the US, European Union, Switzerland and Sweden are putting pressure on the BOE to step up the pace of tightening. A darkening outlook for the economy, which the BOE expects to tip into recession starting in the fourth quarter, is amplifying voices calling for caution. 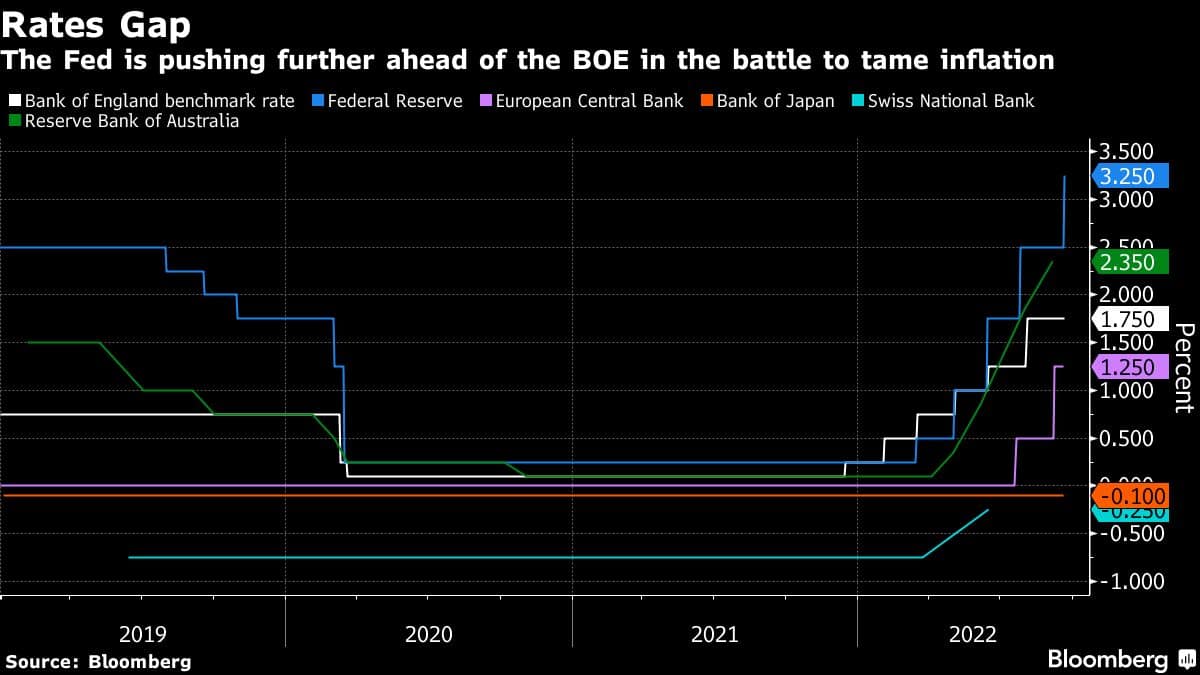 With inflation almost five times the 2% target, the BOE governor is required to write a letter to the Treasury  setting out his plan for acting. Chancellor of the Exchequer Kwasi Kwarteng’s reply gives the government an opportunity to adjust its guidance for how the BOE should act.

That letter, due for release on or shortly after the BOE decision, is most likely to reiterate the Treasury’s previous words that it’s “imperative to bring inflation back down.”

There may also be hints about the government’s “go-for-growth” strategy or a statement Kwarteng will deliver on Friday setting out fiscal plans to rescue consumers from spiraling energy prices, an act expected to curb inflation. And the Treasury could choose the letter as a way to flag details about how it will make good on the government’s vow to review the BOE’s mandate.

This month’s decision is complicated by changes on the BOE’s nine-member Monetary Policy Committee. Last time, it voted 8-1 for a 50-basis point hike, with arch-dove Silvana Tenreyro voting alone for a smaller increase.

Since then, Michael Saunders, one of the most hawkish members of the panel, stepped down and was replaced by Swati Dhingra, whose views on rates aren’t well known. Economists expect a three-way split, with seven policy makers voting for 50 basis points, Catherine Mann seeking 75 and Tenreyro again opting for 25.

“We expect policy makers to vote 7-1-1 in favor of raising rates to 2.25% from 1.75%. Silvana Tenreyro will probably prefer a 25-bp increase, while Catherine Mann is likely to vote for a 75-bp hike. Markets have fully priced a 50-bp move, with the chances of a larger hike at 75%.”

The BOE had planned to endorse so-called quantitative tightening, where bonds from the asset portfolio will be sold. Prime Minister Liz Truss’s decision to borrow huge sums to head off a winter spike in energy costs has introduced an element of doubt.

Bailey and Chief Economist Huw Pill have said that QT won’t happen during times of market turmoil, and both the pound and UK government bonds have been sliding lately. BNP Paribas doubts QT will go ahead as planned this month. 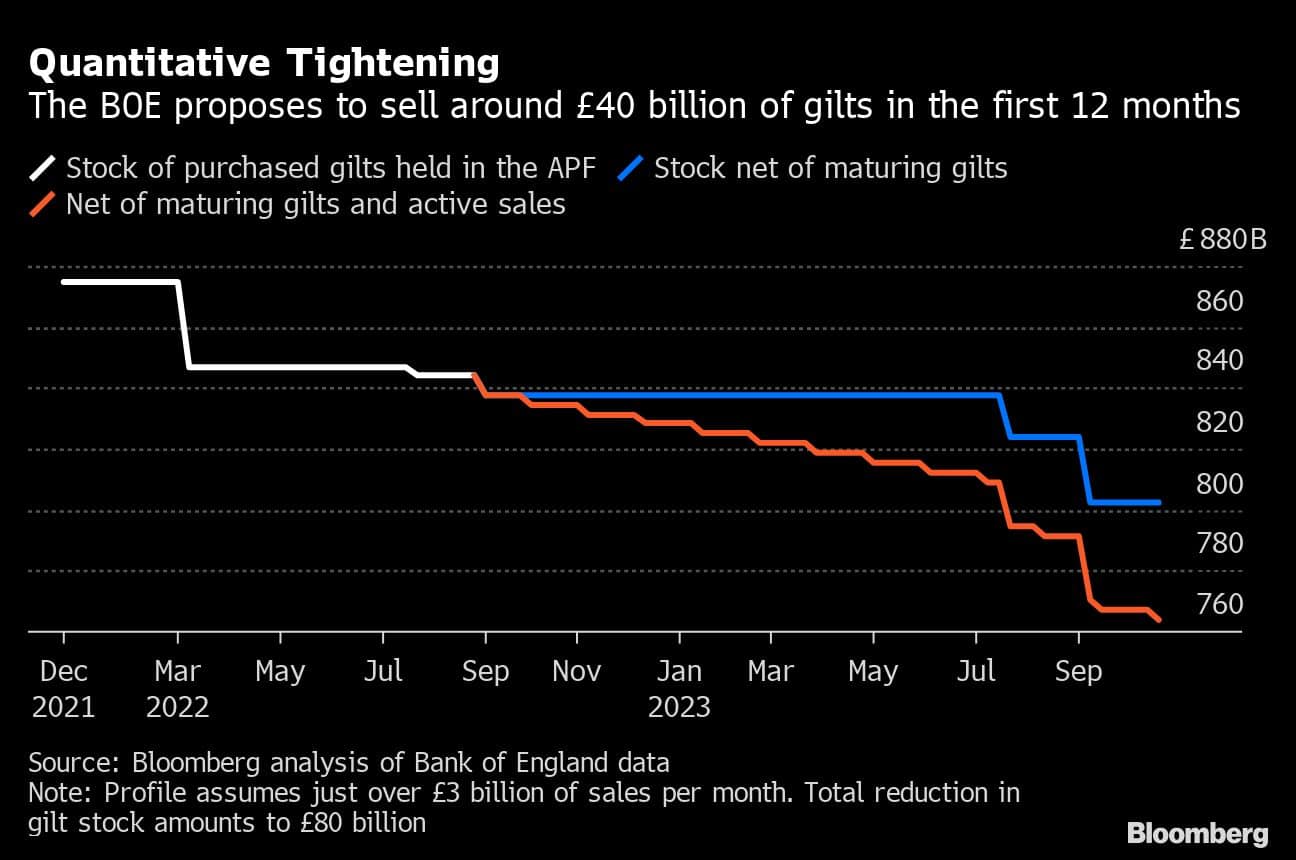 The BOE in August predicted inflation would peak over 13% this autumn, driven by increasing energy prices. Since then, Truss announced plans to protect consumers from spiraling natural gas and electricity costs, and some economists are starting to estimate that inflation may peak lower than that level -- and certainly well under the 22% that Goldman Sachs warned about before the government acted.

This month’s decision won’t have a formal forecast for where inflation and gross domestic product are headed, but the officials are likely to include a figure for where prices peak. Hints about how long inflation will remain above target will also help shape investor views about high high rates need to go, with many seeing the key rate above 4% by mid-2023. Truss’s energy package also will stimulate the economy, softening the blow that the BOE had expected would push the economy into recession.

Officials this month may provide some hint about how much impact on those figures the Truss package will have. It’ll only be after the decision, on Friday, that the government sets out more detail on how much the package will cost.