Artist Reena Saini Kallat’s work looks at social and political borders by bringing the focus on manmade barriers and symbols of nationality.

For Reena Saini Kallat, art has been a means of inquiry as well as a tool for expressing personal and collective concerns. As one of India’s most notable artists, her works span drawing, photography, sculpture and videos that largely dwell on the fluidity of borders and the futility in drawing boundaries when nature itself is boundless.

Reena’s journey into art began out of a sense of loss. She lost her mother to cancer early on in life. “I never thought of art as a profession, but a way of existence that’s as natural as breathing,” she narrates.

As a child, Reena collected magazine clippings and books on art. These introduced her to the lives and thoughts of artists. She was keen on a career in medicine, hoping to find a cure for cancer, but her father recognised her talent and urged her to pursue her interest in art. 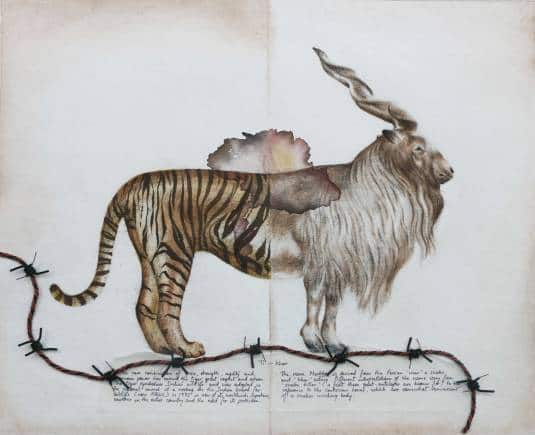 Hyphenated Lives (2015 – 2016) is a re-imagining of fantastical mutations within the natural world, where the national animals, birds and flowers of different countries symbolically get combined

The 1992 and 2002 riots were turning points for her. “I was in college when we began to notice the rise of right-wing fundamentalist thought with electoral politics dividing people by engendering hate and fear, perhaps the legacy of Partition,” says Reena.

Reena had her first solo exhibition in Mumbai in 1998. Since then, she has travelled all around India and the world with her paintings, sculptures, installations and audio-visual works.

Her interest in political borders, the pain of forced migration, and divisive national narratives are distinct in her recent works. Being from a family with roots in Lahore, she has heard stories of how her uncle had to leave everything behind and rebuild their lives from scratch in India. Reena depicts nature’s oneness and the confluence of rivers, birds and trees while highlighting how all divisions are manmade. She shares, “While flying across the border between India and Pakistan one night in 2001, I saw the Line of Control lit up like an incision on the ground. It was a chilling experience, and the feeling stayed with me for years. I made several visits to the Wagah Atari border, experienced the controversial Radcliffe Line drawn to partition the two countries through the no-man’s land. Yet it is more the social barriers between communities than the physical border itself that I constantly think about.”

Her work Woven Chronicle (2011-2016) traces the movement of migrants historically. It depicts the earliest migratory movement out of Africa, labour migrations, movement within industrial societies and even the more recent ones.

A wall drawing is made with electric wires knotted to form continents. Its audio component resonates with high-voltage electric current sounds, deep-sea ambient sounds, the hum of engaged tones from telecommunications, a mechanical-sounding drone, factory sirens, and ship horns that intermingle with sounds of migratory birds. Reena Saini Kallat’s work Light Leaks, Winds Meet Where the Waters Spill Deceit (2010) depicts two halves of the gate on Wagah Border, each wrapped in sacred red thread, which is part of both the cultures of India and Pakistan

“I was thinking about the fibre-optic cables that traverse the ocean floors, connecting us, and the way technology is trying to unify and flatten the world with access to information. Wires essentially transmit energy and information from one place to another. Technology and commerce are blurring geographic boundaries,” she said at eShe’s recent Indo-Pak Peace Summit Led by Women.

In one of her more recent works, Reena revisits the Constitution. Titled Verso-Recto-Recto-Verso (2017–2019), the installation comprises textual scrolls of the Constitutions of eight countries. The preambles of these politically partitioned countries’ Constitutions are revealed as white dots on a blue and black cloth through the process of tie and dye by artisans from Bhuj. The foundational words common to both preambles are in Braille, about which Reena says, “We seem to have lost sight of our common shared values, with our failure to recognise our interdependence.” She speaks of the limitations of language at being able to express deep notions of loss.

Reena regrets the lack of museum-going culture in India. Schools hardly encourage it, she says. “In Delhi, we have the Bhau Daji Lad Museum, the CSMVS, the NGMA and several private galleries actively showcasing art that is socially and politically engaged. We have to work in solidarity and partnership for art to have an impact,” she avers.

The 47-year-old visual artist believes in the transformative power of art, which is what keeps her going. She says, “There is always a sense of hope, and that lies in how we imagine our future and participate in creating it. It would be naïve of us not to recognise our interconnectedness and interdependence on each other for our existence. Our actions impact not just humans but millions of other species with which we share this planet.”