Vir Das: "I’m not a ‘research and do’ person. I’m just a ‘feel emotion and do it anyway’ person"

Actor-comedian Vir Das has now turned entrepreneur with his very own craft beer. ‘Faaaakit’ is a light beer made in association with Great State Aleworks.

Currently on his Wanted Tour in India, Das spoke about his latest venture, acting projects and more. Excerpts:

What made you come up with your own craft beer?

I think it’s an extension of who you are. When God has been kind and when you have a sizeable audience, you try to start extending that brand. People can sense a mile away when a public figure is endorsing something they don’t use. So, I was determined that when I invest in something, it is something I use and like. I don’t drink hard alcohol. I am a beer drinker. With the passing years, I found that the beer culture had become a little alpha-male and snobbish, alienating people who don’t know so much about it. So, I thought let’s make a beer for chilled out people who want to have a good time. We worked with Great State Aleworks for seven months before launching it.

What research did you do before investing your time, money and energy into this?

From comedy to beer to life, I have never researched anything that I have put my time, money or mind into (laughs)! I’m not a ‘research and do’ person. I’m just a ‘feel emotion and do it anyway’ person. You have been on the road for some time now with your Wanted Tour in India. You have been performing on the international stage but it’s been a while since you did an India tour…

That’s right. New York and a couple of other countries opened up before India officially opened up. I spent the pandemic just shooting back-to-back projects. There is a touring career that one built all over the world for ten years which was on hold. It was time to reconnect with people. This year, it's a 32-country world tour but this is the largest ever India tour I have done. We’re going to do about 40 cities in India. I had two acting years and now it’s time for a touring year. I will get back to acting next year.

Last year, your ‘Two Indias’ speech got into a controversy but you have continued to delve into sensitive subjects such as religion and politics. Where does this fearlessness come from?

I wouldn’t term it as fearlessness. That would be false bravado. I think it’s more to do with authenticity. Maybe with age you don’t get funnier, but you stop trying to be something or someone for other people. I’m just going to do me and that means some people will like it and some people will not like it. The common perception in stand-up comedy is that comedians find their voice in 15 years. I’m 14 years in, and it’s time to start using my voice a little.

Post 'Hasmukh' in 2020, we haven’t seen much of you on Indian television. Do you think people here don’t know where to place you?

I just wrapped up a show which I star in and have produced and directed as well. It will come out on OTT mostly by the end of the year. I think we live in a time where you place yourself where you want to place yourself. I’m at a point where I can write my next movie or show. I will do a Hindi movie at the end of next year but when the opportunity presents itself to be a truly global artist, anybody would be a fool to pass it up. If that means spending a fair amount of time doing a Hollywood movie or an American show or a British drama and doing a Hindi project along with it, why not? 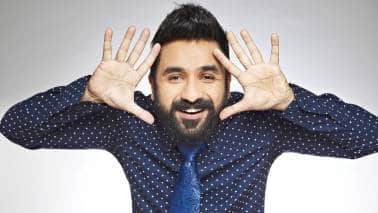 Recently, you put up a post asking new musicians to get in touch with you for the opening acts of your current tour. You did something similar for your appearance at the International Emmy Awards where you asked new designers to design your outfit...

There was no stand-up comedy scene when I showed up. It took five people to say, ‘Hey, let’s give him a job and see what happens’ for it to reach where it is now. Why would I not do that for other people? I have seen eight singer-songwriters play for their largest ever crowd at my shows so far. Some of them have been nervous, some of them have done really well but it’s a breath-taking feeling seeing a young boy or girl perform for their first 1,000 or 2,000 people. It keeps me alive as an artist and inspires me as well.
Deepali Singh is a Mumbai-based freelance journalist who writes on movies, shows, music, art, and food. Twitter: @DeepaliSingh05
Tags: #Craft beer #Faaaakit #Great State Aleworks #Vir Das #Wanted Tour in India
first published: May 28, 2022 07:24 pm